Aelfric of Abingdon, future Archbishop of Canterbury, started his career as a monk of Abingdon Abbey. It was a time when Anglo-Saxon England was enjoying a period of relative stability and prosperity under the Wessex kings. English monasticism was in a process of reform and revival under Aethelwold, Abbot of Abingdon from 954 to 963 and later Bishop of Winchester (see article on this website), and his contemporaries Dunstan, Archbishop of Canterbury from 960 to 988 and Oswald, Archbishop of York from 971 to 992. However, Aelfric’s maturity was a period of decline, marked by a resurgence of large-scale Viking raids and the ineptness of the young king Aethelred II (reigned 978-1016) nicknamed ‘the Unready’ (or, more accurately, ‘ill-advised’).

Aelfric was of a prominent Kentish family, and he came to Abingdon either during the abbacy of Aethelwold or that of his successor, Osgar (964-984). He later became abbot of St Albans and about 990 was made bishop of Ramsbury, which gave him episcopal responsibility for Abingdon and its abbey. In 995 he was promoted to Archbishop of Canterbury, although he retained the Ramsbury bishopric. His main importance in the history of Abingdon is that he was instrumental in regaining for Abingdon Abbey its liberty to elect its own abbots and the return of several estates that had been lost since the death of Aethelwold in 984.

Aethelwold had adopted a French practice of including in his charters statements that anyone breaking their terms to the detriment of the monks would be under a curse. Nonetheless, after 984 when both Aethelwold and Osgar died, King Aethelred gave the abbacy to an unsuitable candidate in exchange for a large sum of money and began to take over and disperse the Abbey’s endowments. In the early 990s, with the resumption of intense and destructive Viking incursions, Aethelred became convinced that the curse was taking effect. There was a negotiation in which Aelfric must have taken a major part, and at Pentecost (Whitsun) 993, at a large gathering in Winchester, the king admitted his faults and issued a charter of reconciliation. The monks had shown their forgiveness by asking God to forgive him. They had celebrated 1500 masses and completed a thousand ‘singings’ of psalms for the king’s soul, and he now guaranteed the abbey’s liberties and began a lengthy process of returning its properties. Aelfric was one of the first of a long list of witnesses to the charter. He was also given one of the disputed estates, which he duly left to the abbey in his will.

As archbishop, Aelfric showed himself a worthy follower of Aethelwold and the other reformers of the previous generation. It was during his tenure that vitae – hagiographic biographies – of Aethelwold, Dunstan and Oswald were prepared as a preliminary to their canonisation. At Canterbury, he pushed forward Aethelwold’s agenda of replacing secular canons with monks.

However, unlike his great predecessors, Aelfric does not seem to have been noteworthy as a scholar. The times required more warlike interests; his will, which survives, leaves the king ‘his best ship’ and equipment for sixty soldiers, and it relieves the people of Kent and Wiltshire of the taxes they would otherwise have had to pay for additional ships. When Aelfric died in 1005, he was initially buried at Abingdon, and his memorial described him as ‘Guardian of the homeland of the English’ and ‘Defender of the Kingdom’. Unfortunately, we don’t know exactly what he had done to earn these commendations. His remains were transferred to Canterbury in 1023.

Aelfric of Abingdon (or ‘of Wessex’) should not be confused with his several contemporary namesakes, such as Aelfric of Eynsham, a scholar and biographer of Aethelwold, or the wealthy Aelfric of Mercia who bought the abbacy of Abingdon for his kinsman, Eadwine. 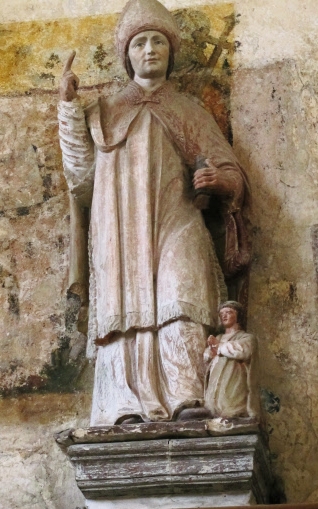 Edmund of Abingdon, the future scholar, archbishop and saint, was born in about 1175, probably in West St Helen Street, where his father, Reginald, had property. Reginald may have been a lay official in the Abbey. Edmund attended the grammar school near to St Mary’s in Oxford, and after further study in Paris became a teacher of the liberal arts in Oxford. After some years he returned to Paris for advanced study in theology. He was back in Oxford by about 1214, not (as is often said) the first doctor of theology in the still new university, but probably the first to have an international scholarly reputation.

In 1222, Edmund’s career changed direction. He left Oxford for Salisbury, where he was given charge of the cathedral treasury, responsible for vestments and ceremonial equipment. However, his high status was shown by the grant of the lucrative prebend of Calne for his maintenance. The Bishop of Salisbury, Richard Poer, was a close associate of the highly controversial Archbishop Stephen Langton, and the move put Edmund clearly into Langton’s circle and in line for further promotion. He is reported as having travelled extensively, especially in the politically troubled west of England, as a preacher.

Langton died in 1228 and his immediate successor in 1233. It was a time of internal warfare. King Henry III and his advisors were at odds with a party among the English barons, who were in armed revolt. Their main complaint was the influence of the king’s minister, Peter des Roches. The king, or des Roches, successively nominated three candidates for the archbishopric, but the pope refused to accept any of them. He imposed Edmund, with the brief to act as a peacemaker.

Even before he had been consecrated, Edmund and his bishops were active in the Welsh border country where the fighting was most intense, negotiating local truces and seeing that they were kept. At a session of the king’s council, Edmund spoke vigorously against des Roches, and ordered the king, on pain of excommunication, to sack him, which was done. Edmund then presided over ceremonies of peace and reconciliation between the king and his barons. This ending of a civil war must stand as the greatest achievement of Edmund’s career.

In October 1240, Edmund set off for a routine visit to Rome. He fell ill and died close to the Cistercian abbey of Pontigny in Burgundy. Miracles were reported to have taken place around his corpse. This was kept by the Cistercians, who started a campaign to have him declared a saint so that they could benefit from pilgrimages and relics. There was widespread political support both in France and in England. Some of the usual formalities were dispensed with, and he was duly canonised in the remarkably short time of six years. The stories that circulated describing him as unusually austere and saintly in life have been taken by hagiographers at face value ever since, but in fact were part of the canonisation campaign and must be read with caution. 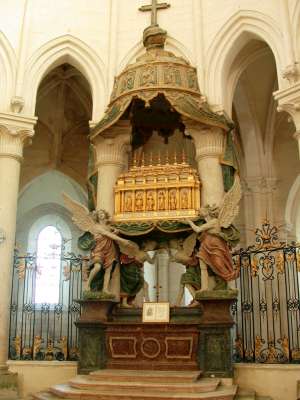 Shrine of St Edmund in the Abbey of Pontigny  (Photo courtesy of Terryl N. Kinder)

Edmund is known in England as St Edmund of Abingdon, and in France as St Edme. His attributes in French art often include infants; he was revered as miraculously bringing still-born babies to life just long enough for them to be baptised. His remains are still at Pontigny, in an ornate shrine held by angels above the main altar.