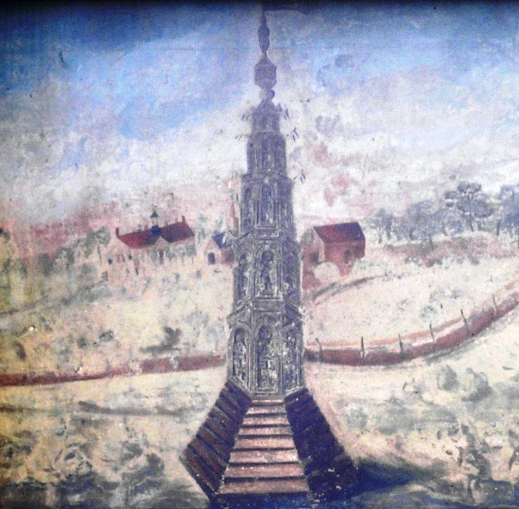 John Richardson was Abingdon’s serjeant-at-mace from 1628 until his death in 1663. His functions included escorting the mayor on ceremonial occasions and, more importantly, acting as his executive assistant, progress-chaser, receiver, enforcer and even at times jailer. A salary of 52s per year, although no doubt supplemented with perquisites, suggests that the job was not full time, although what else he did is not known. Nothing is known of his birth or family, but his executrix was a widow, Eleanor Moore, perhaps a daughter or granddaughter, who remarried soon after his death. He was buried in the vestry at St Nicholas’ Church.

Richardson first appears in the records in 1625, when he witnessed the will of the wealthy John Blacknall, dying of plague. In a time when Abingdon was riven by factional strife, he was plainly on the side of the Blacknalls and their allies, the Mayotts. His employment dates from the mayoralty of John Mayott, and he was once dismissed by Benjamin Tesdale of the opposing faction, but restored to office a few months later. The Tesdales were advanced Puritans, the Blacknalls and Mayotts religious conservatives.

Richardson’s historical significance is in the long account he wrote, in amateurish verse, of a civic celebration held in September 1641, a year before the outbreak of the Civil War. Its importance is shown by the fact that someone spent the money to have it printed in Oxford and published locally. At first sight, it is a neutral description of the occasion, with perhaps a little deadpan humour when he describes the seven hours of preaching that the population were forced to sit through as part of their holiday. In the introduction, the author innocently describes his work as ‘this harmelesse and small Pamphlet’.

Yet harmless it was not, nor was meant to be. Deep in the seventeenth century consciousness was a detailed knowledge of the Bible, and, like much writing of the time, the piece abounds in biblical allusions which carry the intended message. Re-reading it with this in mind shows it as a well calibrated and well-aimed attack from the traditionalist side on many of the Puritan tenets upheld by the Tesdales and their friends. In particular, Richardson is concerned to vindicate the use of music and singing in worship, which the Puritans disliked, and to protect the Market Cross, threatened with destruction as – according to the Puritans – idolatrous.

The most polemical section comes in the middle, where Richardson describes himself preceding the Mayor and Corporation from St Helen’s to the Cross, and hearing the townsfolk enthusiastically singing a psalm:

The key to the passage is the reference to King David and the rather strained trope that the Cross is somehow being consecrated. This makes a connection which contemporaries will have understood between the Cross and the holy Ark in the Bible, which was consecrated by David with instrumental music, singing and dancing. David’s wife Michal was cursed with sterility for her disapproval, and a certain Uzza was struck dead for touching the Ark with impious hands (1 Chronicles 16:5-9; 2 Samuel 6:5-23). The Puritans were being warned, though they would in fact succeed a few years later in their aim of demolishing the Cross.

Richardson no doubt wrote other poems, but none have come down to us. His verses have little literary merit. But In honour of Abingdon, or the Seventh day of September’s solemnization tells us more of the state of Abingdon society, and indeed that of the country as a whole, in the run-up to the Civil War than many more expertly written accounts.