Our grandfather, William Ackling, was well known in Abingdon from the 1890s to the 1940s as the proprietor of the ironmonger’s shop in Bath Street. He was a highly skilled metalworker and he and his sons contributed greatly to the everyday needs of the people of Abingdon.

The earliest local reference to the Ackling family is in the year 1747 when Daniel Ackling married Sarah Archer in St. Helen’s church, and five more Daniel Acklings are listed in the church records between that date and 1831.

William was born in 1864 to John and Elizabeth Ackling and was the eldest child of eight. When he was sixteen it is recorded in the 1881 census that he was a Tin Man Apprentice (known today as a Metal Worker). He went on to become exceptionally gifted in metal, brass and copper and in the early 1890s opened an ironmongers shop at No. 32 Bath Street – this number was changed in later years and is now No. 44.

William married Agnes Curtis from Beedon in about 1890 and they had four sons: Percy, Harry, Stan and Archie and one daughter, Agnes – inevitably called Sis. He was very forward thinking for those days and made sure that each son was trained in a different trade (building, carpentry, metal working and plumbing) so that they could combine their knowledge and form a profitable business. Their sister became an accomplished seamstress. Sadly, the First World War came along and the three eldest sons were old enough to be enlisted. Fortunately, they all returned safely.

The shop was double fronted with large windows where they displayed all manner of lamps – brass, oil and later electric – also coal scuttles, fire screens and a variety of kitchen accessories of the day – many handmade. Inside was a small counter with many drawers and shelves behind, and early on there was a metal barrel filled with paraffin as that was the age of candles and oil lamps − no Health and Safety regulations in those days.

William Ackling advertised regularly in Hooke’s Abingdon Almanack and Directory. The typical advert on the left dates from 1907 and shows his wide range of skills.                   With thanks to Abingdon Library

This entry in the ledger of the engine-building firm of Crossley Brothers Ltd shows that they sent William Ackling a K‑type gas engine on 15 August 1902. It was the first engine to be used in the basement of the County Hall.
Courtesy of the Anson Engine Museum

William Ackling was also appointed by the Borough Council as the contractor for the engines and pumps used to supply the town with water. These were situated both at the waterworks in Wootton and in the basement of the County Hall.

The family’s living quarters were behind the shop and upstairs, and then in the yard at the back was a workshop where they made their wares. We as children were allowed to pump the bellows so that the forge could attain the high temperatures needed for such work. Other articles they made were wrought iron gates and railings, weather-vanes of foxes, horses, hounds and many other designs, and even public house signs. Two of those signs we remember well and were both made by our grandfather: one was for The Fish public house in Sutton Courtenay – he made a fish about three feet long with each scale individually cut to size, a true work of art – and the other was of a cockerel sitting in a tree for The Cock and Tree public house in Ock Street. No doubt there are others around which we do not know about.

However, there is one piece of work still visible today, and that is the copper cockerel weather-vane on top of St. Peter’s Church tower in Drayton. This was made in memory of a young man called Henderson who was killed in the First World War. His parents commissioned it in 1929, and some years ago it was re-gilded by Geoffrey von Hoven and it just looks glorious when the sun shines upon it. You can see Daria holding it in the photograph before it was replaced. 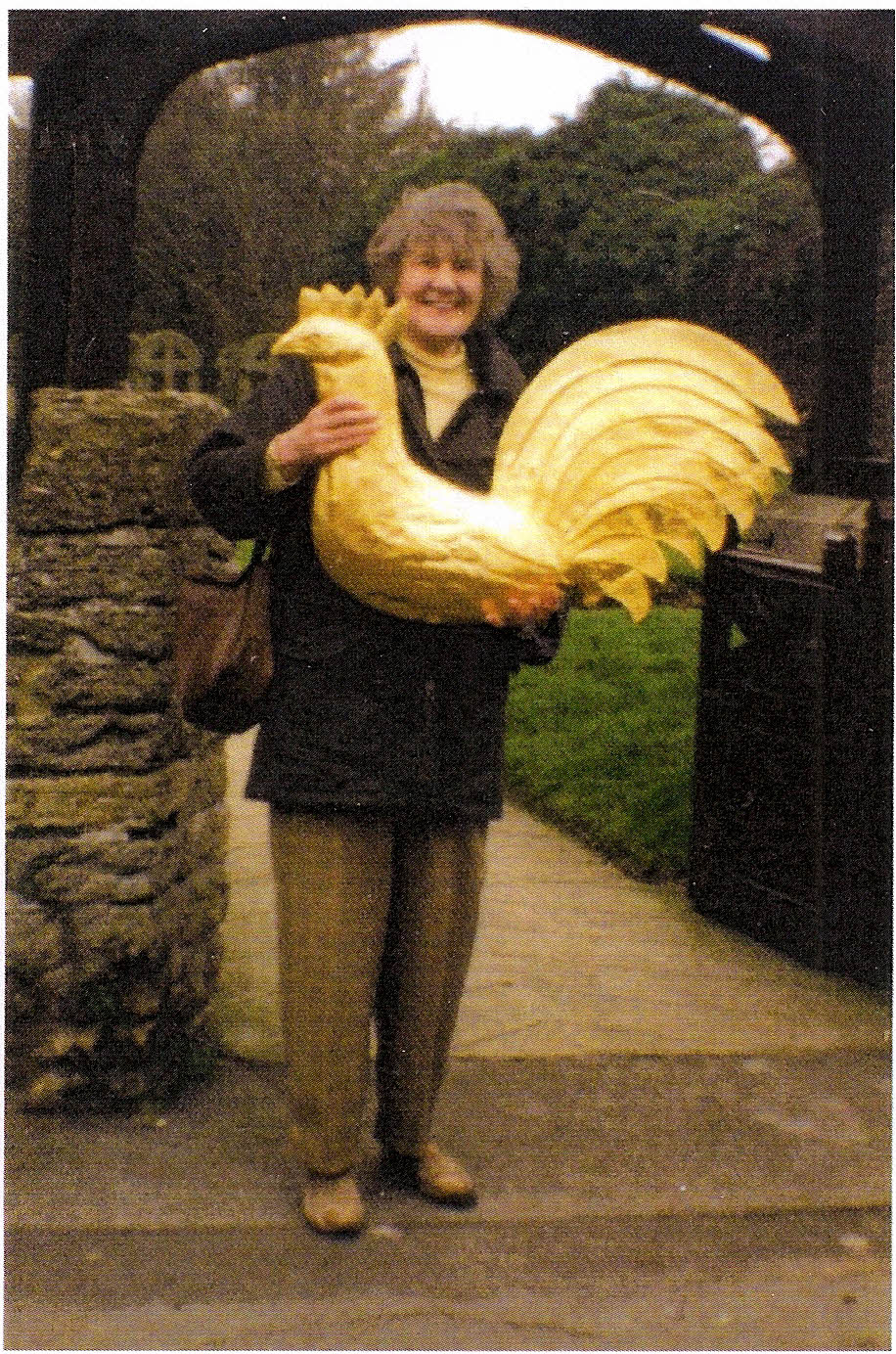 Daria Stimpson, one of William Ackling’s granddaughters, holding the re-gilded weather vane of  St Peter’s Church in Drayton in 1998.
Courtesy of the authors

Apart from the originality and artistic talents the family was also musical: William played the cello in the local orchestra and Percy the violin. Harry was a choir boy in St. Helen’s Church and sang in the school chapel at the opening of Saint Helen’s school in 1903.

Stan and Archie were both members of the Abingdon Volunteer Fire Brigade, and Archie continued into the National Fire Service attending many of the blitz fires during the Second World War. He invented a number of garden implements and had a large part to play in the invention of the Allen Grass Cutter.

It is a quirk of fate that these four boys produced four daughters and the daughter, Agnes, produced two boys. Consequently this branch of the Ackling family will be unable to carry on the name.

The shop closed in the late 1940s after nearly fifty years of trading and contributing to the life of Bath Street. 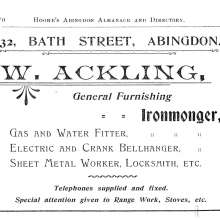 George Winship was Abingdon’s Inspector of Nuisances and Borough Surveyor for forty-one years and brought Abingdon into the twentieth century. Much of what he did is still with us today. […] 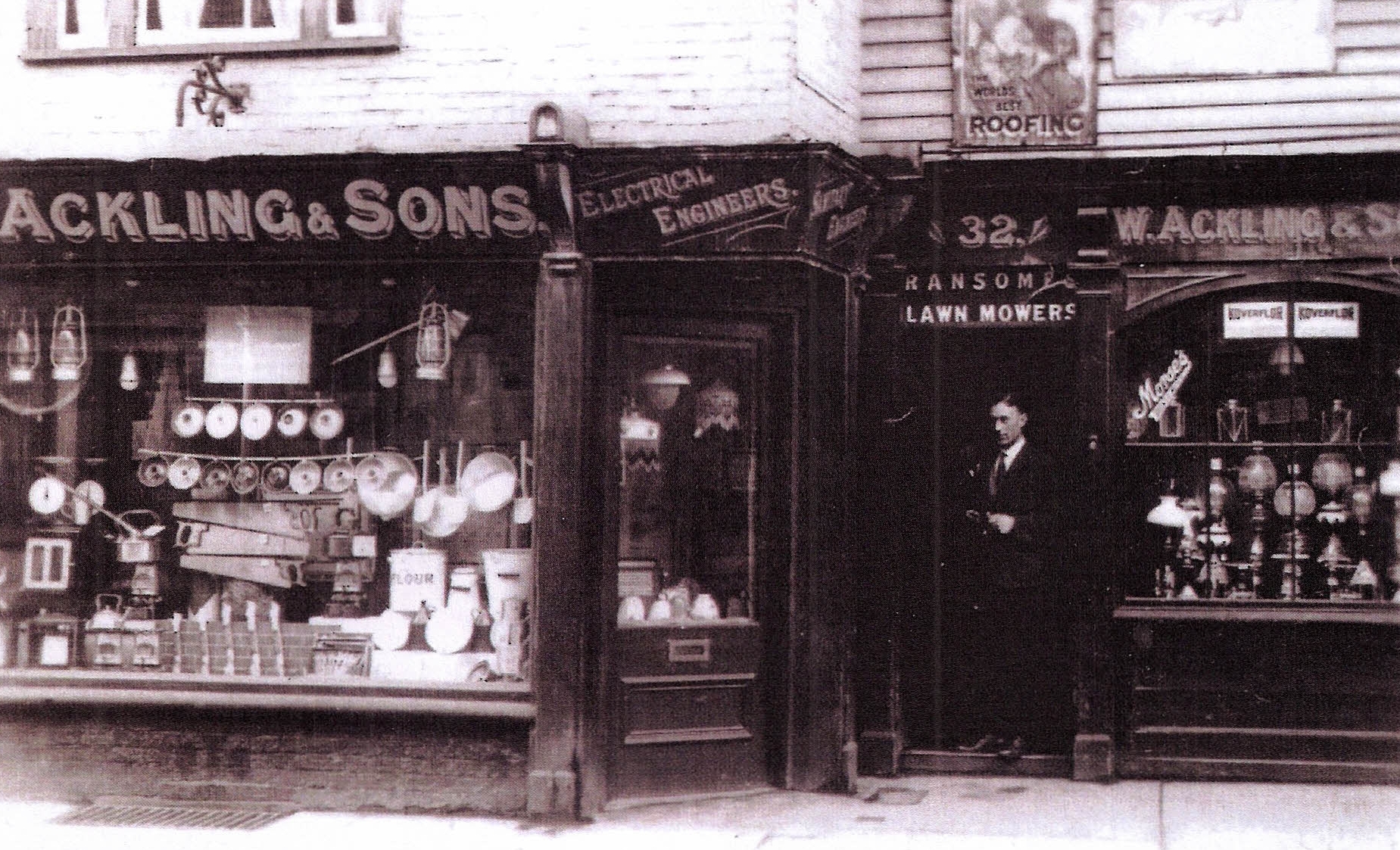 Courtesy of the authors