About the turn of the fourteenth century a group of artisans and artificers working at and around the royal court developed a distinct ‘Westminster style’ of architectural ornament and sculpture. Alexander ‘le Ymagor’ or ‘of Abingdon’ was an important member. Little is known about him, but there is evidence that he achieved distinction as a sculptor, specialising in the human figure; less respected workmen would not have been able to specialise. He became a citizen of London, a high social status for one of his trade. There were at the time at least two sculptors named ‘of Abingdon’, the other being Johannes who worked at Merton College, Oxford, in 1290-1, as well as several masons. There will have been employment for many such craftsmen at Abingdon Abbey where the great church had recently been rebuilt, and it is supposed there was provision for training them.

Alexander’s reputation is based on his work on the Eleanor Crosses. Queen Eleanor of Castile died at Harby in Nottinghamshire in 1290, and her grieving husband, Edward I, had a cross erected at each point where the funeral cortege stayed overnight on the way to her burial at Westminster Abbey – twelve of them altogether. It was not usual at the time to associate a given work of art with a particular artist, but there is documentary evidence that Alexander was directly responsible for the three effigies of Eleanor on the cross at Waltham in Essex. The originals, very weathered, were removed and replaced in the nineteenth century. Stylistically, they stand at a point where Gothic tradition begins to evolve into Decorated. Alexander’s figures are marked by a certain sinuosity of the bodily stance and a particular emphasis on the fall of the draperies. 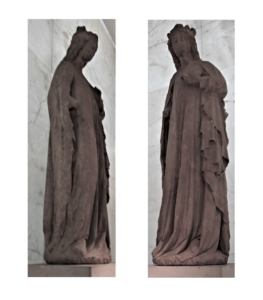 Side views of Eleanor of Castile, from the Eleanor Cross at Waltham, Herts, now in the Victoria and Albert Museum, London.(Photo: J. Brod) 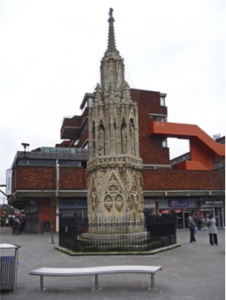 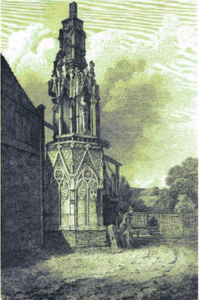 Waltham Cross, in about 1803, showing original sculptures.Engraved by J. Greig from a painting by G. Arnold (Internet resource) 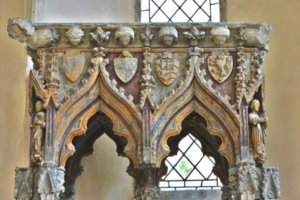 A number of other sculptures of the period have been attributed, with greater or less confidence, to Alexander. These include effigies and weepers on the tombs of Edmund Crouchback, Earl of Lancaster, and his wife Aveline in Westminster Abbey, and others at Ely, Wells and Canterbury Cathedrals.

St Michael’s Church at Stanton Harcourt has a shrine to the seventh century St Edburg that is locally believed to be by Alexander. It came from Bicester Priory which was suppressed under Henry VIII.

The picture at the top shows a well-preserved Virgin and Child that is claimed, somewhat mysteriously, to have been “found in a house in Newbury” as recently as the 1980s and is now in the Metropolitan Museum in New York as Alexander’s work.

While there are few craftsmen of Alexander’s time whose careers are as well documented as his, the fact remains that it is only the Eleanor Cross sculptures that are certainly known to be by him. Other attributions can be based only on local tradition or on stylistic judgement and must remain tentative. 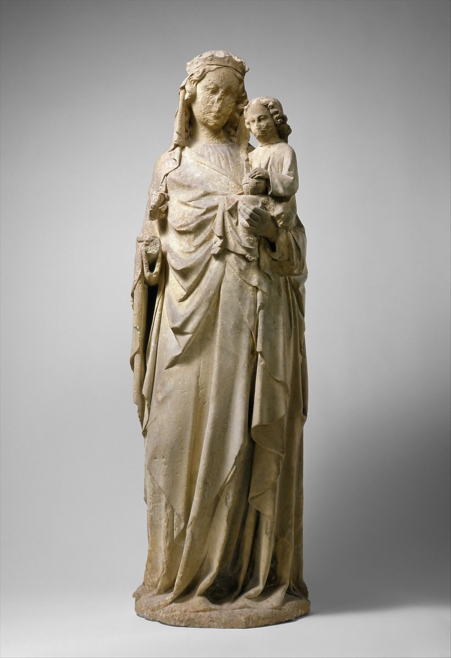 Virgin and Child, attributed to Alexander of Abingdon, in the Metropolitan Museum of New York. (Image in the public domain)

Aelfric of Abingdon
Scroll to top