Archie Kirkman Loyd was twice MP for the Abingdon Division of Berkshire, from 1895 to 1905 and from 1916 to 1918. Born in India and trained in England for a career in the Indian Civil Service, he opted instead for the law. He was called to the bar at the Middle Temple in 1868 and became a Queen’s Counsel in 1892. In 1885 he married Henrietta Louisa Clutterbuck, of a wealthy landed family in Chippenham. They resided first at West Ilsley and later at Downs House, East Hendred. There were four sons, one of whom was killed in the early months of the First World War.

Loyd was a second cousin of Harriet Sarah Loyd, daughter and heiress of the very rich banker Samuel Jones Loyd, Lord Overstone. She married Robert Lindsay – who changed his name to Loyd-Lindsay – in 1858 and settled at Lockinge, near Wantage. Loyd-Lindsay was a figure of great influence in North Berkshire. He was one of the MPs for the county of Berkshire from 1865 to 1885 when he became Lord Wantage, and his cousin Charles Lindsay sat for Abingdon from 1865 to 1874.

Archie Loyd was very close to Harriet and her husband. Loyd-Lindsey was one of the founders of what later became the British Red Cross. That organisation met its first great challenge in the Franco-Prussian War of 1870, and Loyd became Loyd-Lindsay’s private secretary in a period of hectic activity. They went together to organise humanitarian relief in the Serbo-Turkish war in 1876, narrowly escaping being caught up in the extremely bloody battle of Alexinatz, and Loyd personally headed the mission to the Russo-Turkish war a year later. He received the thanks of the Tsar at an audience at Plevna in present-day Bulgaria. When in 1883 Loyd-Lindsay, convalescent after an illness, took a long trip to South Africa, Loyd accompanied him. In 1887 Loyd’s wife gave birth at Lockinge; the boy was named Robert Lindsay Loyd and no doubt had Lord Wantage as godfather.

It was Lord Wantage, as head of the constituency Conservative Association, who nominated Loyd as parliamentary candidate in 1895. The Abingdon division extended as far as Faringdon, Wantage and Wallingford; it was a safe Conservative seat, and Loyd took it with a much increased majority.

Loyd was unopposed in 1900, but did not stand in the election of 1906 because of ill health. In 1916, the then MP, Harold Henderson, resigned, and Loyd came out of retirement to replace him. He was unopposed at the by-election, and held the seat until 1918. His nephew, Arthur Thomas Loyd, would be MP for the Abingdon division from 1921 to 1923.

Archie Loyd was assiduous if unspectacular as an MP. One of his earliest preoccupations was with the level of death duties to be paid on an estate that went to a widow when there were no children – a matter of obvious concern at Lockinge House. Following his patron’s example, he was always ready to take up the cause of ex-servicemen in difficulty with civilian bureaucracy. As a former assize barrister, he was active in reforms of the criminal law, and as MP for a largely agricultural constituency, supported the interests of tenant farmers and worked to get better housing and old age pensions for their labourers.

Loyd was a Berkshire JP and deputy-lieutenant, and a member of the Berkshire County Council. He was a governor of Abingdon School from 1901 till his death. But his abiding interest was the British Red Cross, of which he was vice-chairman, remaining active until late in his life. He published a book on the organisation of the Red Cross during the First World War, as well as several treatises on the law relating to cheques and promissory notes.

Loyd’s career is defined by his relationship with both the Loyd-Lindsays. Harriet refers in her memoir to his ‘life-long affection and devotion’, and made him significant gifts of property after her husband’s death. It was his nephew, Arthur Thomas Loyd, who inherited the major portion of the Lockinge estate.

Ralph George Campbell Glyn was probably Abingdon’s longest serving MP, holding the seat from 1924 to 1953. He was born in 1885; his father was Bishop of Peterborough and his […] 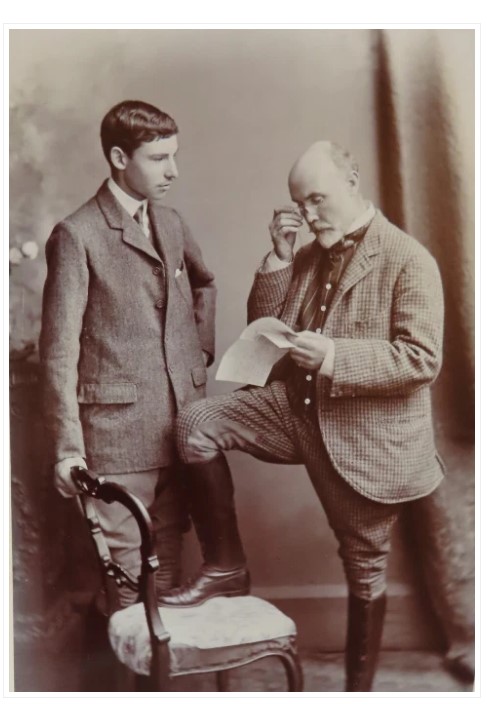 Archie Kirkman Loyd with his son Geoff, in about 1908. The boy would be killed in the First World War.

Reproduced by permission of the Provost and Fellows of Eton College.