Abingdon, now in Oxfordshire, but in Berkshire until 1974, was where many of the Williams family lived, worked and died throughout the nineteenth and twentieth centuries.

Thomas Williams and his wife Sarah were married in Culham in 1802. They were to have at least eight children. Thomas was a baker and he and his family lived in East St Helen Street. He died at the ‘Old Almshouses’, Abingdon, in 1843 at the age of 70.

One of his sons, James, also then a baker, married at St Helen’s Church in 1837: he and his family lived in Ock Street although by the time of the 1861 Census they had moved to Lombard Street. However the 1871 Census shows James and his wife Martha running the Black Bull Public House in Bury Street (where the Cancer Research Shop is in 2014).  Indeed Jackson’s Oxford Journal reported in 1870 that James Williams had been fined £1 by Abingdon Magistrates for selling beer after hours. He died in 1880 and the census of 1881 reveals his widow Martha as landlord of that hostelry.

Their son, another James, born in 1846, initially worked in London as a baker, probably with an uncle and cousins. He and his wife Emma Kate took over the pub on the death of Martha. However, James’s primary occupation was as a butcher, and he carried on his business conveniently next door to the Black Bull.  Kelly’s Directory of 1883 has an entry: ‘James Williams – beer retailer, butcher, dairyman, furniture broker and general dealer Bury Street, Abingdon’.  On his death in 1893, the Abingdon Herald of 26 January said that James Williams of Culham House Farm had been ‘in business in the town for nearly twenty years’ He had been a butcher and a publican, and for twenty-six years a member of the Bowyer Lodge of the Order of Oddfellows. Forty members of that and of the Ivey Lodge attended the funeral; fifteen of his employees joined in the procession; and four journeymen butchers of the town acted as bearers. Following his death, James’s sons continued with the butchery business and his widow Emma Kate became sole licensee of the Black Bull. 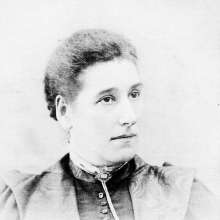 James’s second son, Henry, known as Harry, entered the saddlery trade, then a thriving local industry. Following a fire in 1900, Harry and his family moved to Epping but in 1914 he returned to Abingdon and re-established himself in the saddlery trade from premises in Broad Street, as well as buying a confectionery and tobacco business at 14 and 16 Stert Street. The saddlery business soon moved next door to 18 Stert Street. Harry was still running that business at the time of his death in 1949 at the age of 74, although by then saddlery had all but disappeared as a trade. The confectionery and tobacco business was first run by Harry’s wife Sarah, who had been born in Wootton, and later by their son Ronald with the help of his wife Phyllis.

The retailing of fruit and vegetables started when farmers began paying for their saddlery in kind rather than in money. Ronald ran the shop from the 1930s until his retirement in 1966.

The family were staunch Methodists and Ronald and Phyllis were founder members of All Saints Methodist Church which opened in Appleford Drive, Abingdon, in 1959. After his retirement, Ronald joined Probus and became a trained advisor at the Citizens Advice Bureau. He had attended the Culham College Practising School and was active in their Old Boys Club. His two sons attended Abingdon School and their daughter St Helen’s Preparatory School and then Fitzharry`s School in the Northcourt Road.  Ronald died in 1993 aged 84 and Phyllis in 1994. 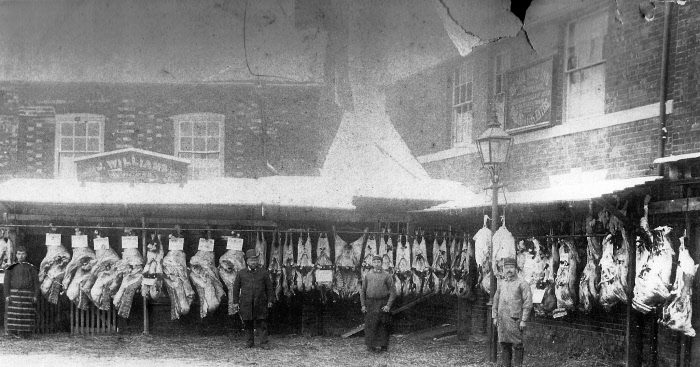 James Williams jnr (in bowler hat) outside his butchery about 1890. The Black Bull is on the right.