This street is one of the earliest in Abingdon. Roman remains have been found below ground at a number of houses. Running from the market place to St Helen’s church – both with Saxon origins – it was probably a major street in pre-Conquest Abingdon.

East St Helen Street (vico orientali sancte helene) is known by that name in deeds of about 1245, but for a time in the eighteenth century it was also known as Fore Street. Many houses have medieval cellars; a date in the late thirteenth century has been suggested for that at No.30 (St Ethelwold’s).  No.26 has been tree-ring dated to 1431, and the rear of No.30 to 1454. From 1436 a building on the site of Nos. 32 and 34 was the feasting hall of the Fraternity of the Holy Cross, one of the pre-Reformation religious guilds in Abingdon. The stone building at the riverside on the south was a dyehouse in the 1440s. The jettied cottages at Nos. 51 and 55 are also medieval in origin. 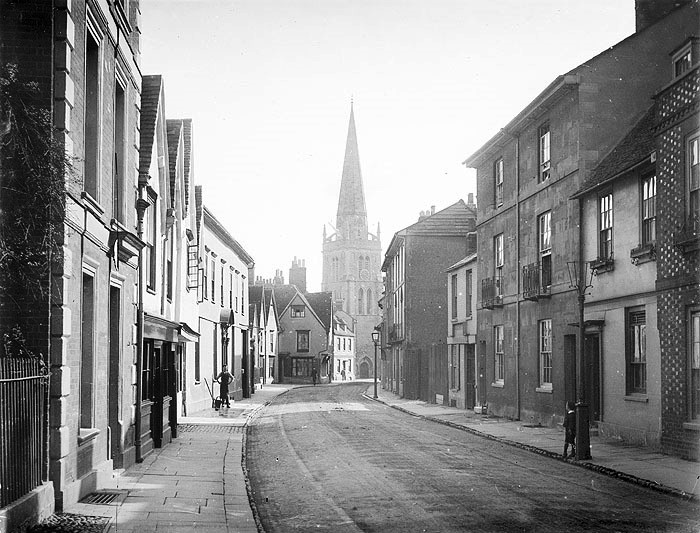 View southward in 1890 from No. 22 on the east side to St Helen’s Church at the end. On the west side the view starts with the chequerboard brickwork of No. 27A
(c) Henry Taunt, CC44_00040 Historic England NMR

The houses on the east side of the street had river access to the rear and may have been the focus for river-related mercantile trade, while the west side might have been for domestic and manufacturing activity. In the early seventeenth century grander houses began to appear in the street – the most impressive being Unicorn House (No.28) in 1617. Gentrification continued in the eighteenth century with the building of the front of No.30 around 1700, No.57 in 1732 and Twickenham House (No.20) in 1756-7 for the wealthy Tomkins family of maltsters. Their commercial premises were further down the street, in and behind the former dyehouse. But commercial activity carried on behind the grander frontages: brewing and a coal merchant at No.30, and another coal merchant at No.36. In the twentieth century some of these became garages, then gardens or, in the case of St Helen’s Mews, small housing developments. Riverside warehouses have been converted to housing at Fairlawn Wharf and The Maltings.

As it links the Guildhall with St Helen’s Church, East St Helen Street is often used for parades as in this one in August 1902 to celebrate the coronation of King Edward VII. 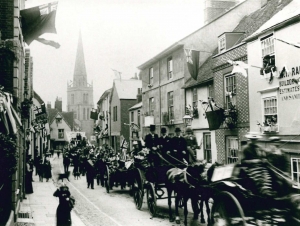 There was an inn on this site before 1554 when it was noted in a survey as The Bell. Its status as a major inn in the Bury or market […]

No.55 with its neighbour No.51 are part of a timber framed row of rental properties built some time around 1500. They belonged to the Braunche family in the mid-sixteenth century. […]

Behind the elegant Georgian façade of No.30 there is a long sequence of building and adaptation to new requirements. Archaeologists have found evidence for Roman metalworking on the site. Some […]

No.28 is one of the largest and most impressive houses in East St Helen Street. A building on the plot was identified in Amyce’s 1554 survey but nothing of that […]

No. 26 East St Helen Street is the most complete surviving medieval house in Abingdon. It was built in 1431 and had two jettied cross-wings that also overhung a central […]

This early Georgian building was built in 1756-7 for Joseph Tomkins.  The Tomkins were among the leading families of the town; they were prominent members of the local Baptist Church […] 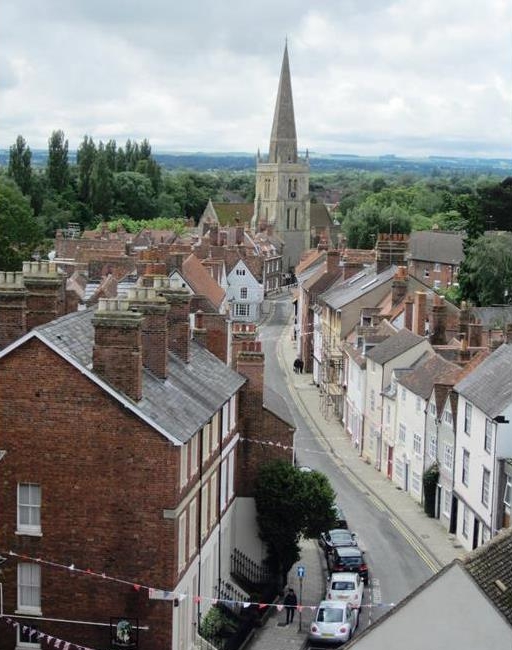 East St Helen Street in 2012 from the County Hall Roof