Fishing Permits can now be renewed for the fishing season that started on the 16th of June. This is now available to do online. Please email information@abingdon.gov.uk with your name […]

Abingdon Abbey was probably founded in the late seventh century, but its great days started when it was re-founded by Bishop Aethelwold and the Wessex kings about 950. It remained one of the foremost of the English abbeys, and at the Dissolution of the Monasteries under Henry VIII its income was assessed as the sixth largest in the country. At that time it was probably the greatest landowner in the county of Berkshire, and also held property in many other parts of the country. The Abbey church was of a size and splendour comparable to any of the great cathedrals. Nothing of it remains, but its outline is marked out on the ground in the Abbey Gardens.

The Abbey and its surrounding lands occupied an area east of what today is Stert Street and that stretched from the Thames to what are today The Vineyard and Radley Road. Within this area, the Abbey church and its associated monastic buildings stood in their own precinct which ran behind the present Stert Street on the west and was defined by the Millstream on the south and other waterways on the east and north.

For the people of Abingdon, the Abbey was the landlord from whom land in the town was leased. It also had rights over the markets and monopolised market revenues. Relations between the Abbey and the town were sometimes strained; in the riots of 1327 Abbey property was attacked and destroyed, and twelve of the townsfolk finished on the gallows.

In February 1538, the Abbey was the first of the larger monasteries to be dissolved. The Abbot and twenty-four monks were given pensions or found other positions. The household staff numbered about thirty-five, and they and perhaps others will have lost their jobs.

Only two groups of Abbey buildings survive. One group consists of the Abbey Gateway flanked by St Nicholas’ Church and the part of the Guildhall that was once St John’s Hospital. The other runs parallel to the Millstream, and includes the Long Gallery, the Checker, and what is now the Unicorn Theatre.

The Unicorn Theatre is inside a multi-phase stone-built structure inserted lengthwise into a space between two earlier buildings, the Checker of about 1260 to the east and the abbey barn […]

The Long Gallery is one of the few surviving buildings of the great medieval abbey of Abingdon. Recent tree-ring dating has established it was built in 1455, and the quality […]

The Checker dates from the 1260s and is one of the oldest of the surviving buildings of the great medieval abbey of Abingdon. When built it consisted of one large […] 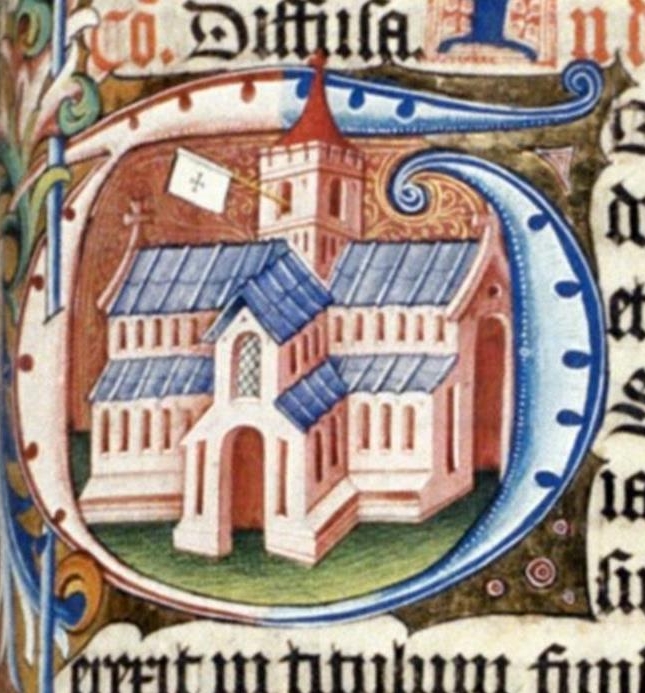 Detail from the Abingdon Missal of 1461

fol. 188 r, Reproduced by kind permission of The Bodleian Libraries, The University of Oxford. MS. Digby 227