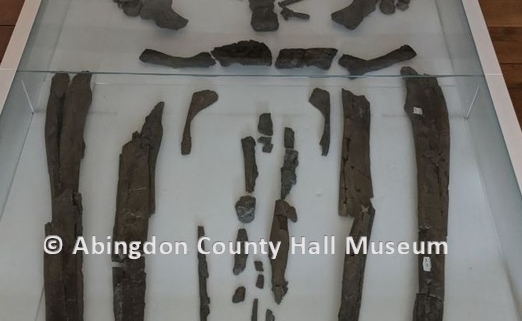 The specimen was discovered in a local gravel pit at Oday Hill in 1988 and its current display has been possible thanks to the conservation and curatorial staff of the Oxford University Natural History Museum.

The next time you will be able to see the so called ‘Abingdon Ichthyosaur’ you will notice a change in its display.
This week researchers from the University of Portsmouth visited Abingdon Museum to have a look at the Abingdon Ichthyosaur in the Attic Gallery.
A close look at the specimen with measurements and photographs revealed that some of the bones had been misidentified and wrongly placed. Scrutiny of the jaw bones revealed an interesting pathology with several bite marks, tooth marks and evidence of healing. This preliminary study resulted in a change to the layout of the ichthyosaur skeleton, which now better reflects the shape of the animal.
The study is still ongoing but it illustrates that the Abingdon Ichthyosaur is an important local discovery and we are still learning a lot about this specimen.

We will share more information about this research in the upcoming months.

Sad news regarding the cancellation of the 2020 Michaelmas and Runaway Fair...
Scroll to top