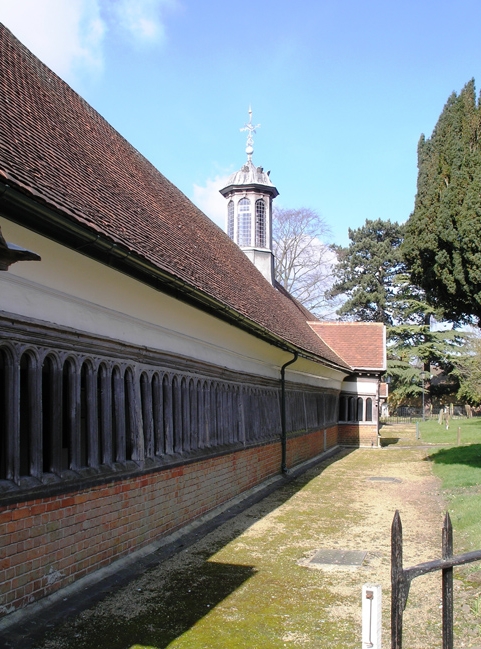 The Long Alley almshouse is an elegant building, still in use for its original purpose. But it also has great significance for the history of the town of Abingdon.

It was in 1441 that the Fraternity of the Holy Cross, based in St Helen’s Church, gained a royal charter. For the first time, the townsfolk of Abingdon had an institution that was legally incorporated, independent of the Abbey, and able to raise funds for its own purposes. The charter gave them an explicit right to set up an almshouse for thirteen ‘poor sick and impotent men and women’. The Abbey had a monopoly of burials in Abingdon, so St Helen’s Churchyard would be a convenient location for the new almshouse. It was built in 1446-7.

The almshouse is a long low building with a covered walkway in front. Refurbishment in 1605 gave it a handsome panelled central hall for the use of the governors, a central gabled porch, and an off‑centre lantern which has been re-covered from time to time since. The graceful chimneys at the rear are probably also of that period.

The paintings in the porch and on the outside walls are also of 1605 and are by Sampson Strong, an Oxford painter with few artistic pretentions. They include scenes of biblical charity and moralising quotations. On the south wall, facing the river, is a depiction of the old Abingdon market cross, demolished by the Puritans in 1644.

The central hall is usually open on Heritage Days.