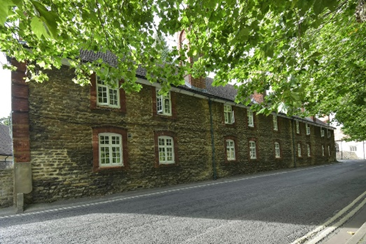 Brick Alley is the name of the almshouses facing into St Helen’s churchyard along its south side. The rear is on St Helen’s Wharf and looks on the river.  When Geoffrey Barbour, one of the men who organised the building of Abingdon Bridge, died in 1417, he left money for the foundation of an almshouse on or close to this position. In 1554, it was described as consisting of a hall and twelve chambers that sheltered ‘twenty poore creatures’ who lived by charity. By the eighteenth century it was dilapidated. The Abingdon charity Christ’s Hospital took it over, demolished it, and built the present Brick Alley in 1718-1720. It had to pay a five-shilling fee to the bishop for permission to build on the edge of the churchyard. The construction was entrusted to two local master craftsmen, Samuel Westbrook for the structure, and Charles Etty for the woodwork. 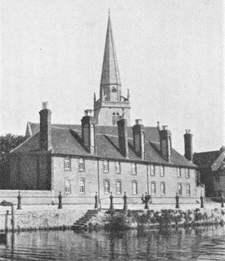 Rear façade of Brick Alley, about 1885By permission of the Master and Governors of Christ’s Hospital

While Twitty’s Almshouses, which had been built only a decade or so earlier on the opposite side of St Helen’s Churchyard, differ little in their general layout from the fifteenth-century Long Alley almshouses on the west side of the churchyard, Brick Alley is self-consciously ‘modern’ and must have been intended as a prestige project. It has an upper floor and, on the churchyard frontage, a central pedimented staircase turret. The churchyard façade and the two end walls are in fine chequered brickwork. Access to the individual apartments was (and is) from a ground floor passage and an upper gallery on the churchyard frontage, both enclosed within six tall arches, three on each side of the staircase turret. The gallery has decorative balustrades within the arches.

There is a two-storey annexe on the eastern end which is generally of much lower quality. The rather awkward roof join shows that it was built after the main structure, and it is probably the wash house that was reported as being provided for the inmates in 1884. Its windows echo the curve of the arches.

Several writers have assumed from the churchyard façade that the building was intended for twelve inmates, but the rear façade shows nine windows on each floor, thus nine rooms, and in fact there were from the start eighteen residents. The rear side of the building will have faced on to a busy industrial wharf, and is much simpler; it is of roughly coursed rubble stone with brick in the quoins and window-surrounds. In the original plan, the nine front doors on each floor of the churchyard frontage were arranged symmetrically with two doors in the outer and inner arches and the ninth behind the staircase turret. The building was modernised in the 1950s. 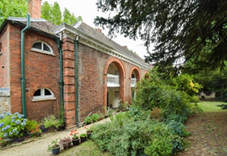 The churchyard frontage of the Brick Alley Almshouses from the east.
The slightly lower annexe on the left is probably the washhouse provided in 1884.© M Harrison 2020

The first inmates, three men and fifteen women, moved into Brick Alley in March 1719. They must have found their new quarters an improvement, but it seems relations with their new patrons were not good. They were not accustomed to the discipline Christ’s Hospital required of them, and had to be threatened in 1720 with the loss of their regular money payments.