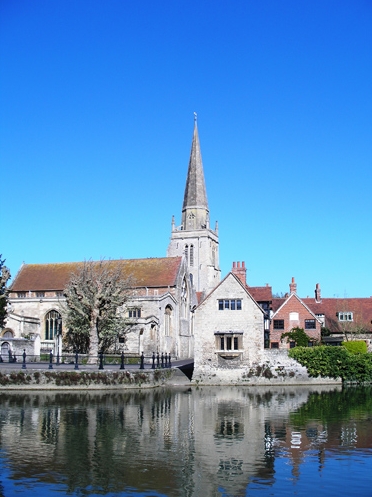 St Helen’s has always been Abingdon’s principal church. It is remarkable for its shape, being much wider than it is long, and even more so for the ceiling paintings in its Lady Chapel, which are of the late fourteenth century and of great artistic importance.

The church was built at the confluence of the rivers Ock and Thames.  Although its first mention in written records is in the tenth century, it is likely to have been founded in the late seventh or early eighth century and was probably a Minster or mother church for the surrounding area.

Serious rebuilding began in the early thirteenth century. The church then consisted of a nave and a single aisle with a tower to the north.  In 1240 the religious Guild of Our Lady financed the building of the Lady Chapel to the south of the main aisle. In 1391 the Guild commissioned a magnificent painted ceiling for the Lady Chapel, helped by a papal indulgence which promised subscribers a four‑year reduction in their post-mortem stay in purgatory. The ceiling paintings, restored 1983-91, show Old Testament kings and prophets and an exquisite ‘lily crucifixion’, a rare depiction of Christ on a lily.

Three further extensions towards the south were added in the fourteenth, fifteenth and sixteenth centuries creating the present church with its central nave flanked by two aisles on each side. The last major extension was the outer south aisle, built in 1539 by a wealthy local widow, Katherine Audlett, who wanted somewhere for herself and her late husband to be buried.  There was also a need for more worship space since Abingdon Abbey had been dissolved and its church demolished.

The spire was rebuilt in 1634 and again in the 1880s. A major restoration took place in 1873 and further changes were made when the chancel and some of the roof details were reworked in Victorian Gothic style in 1879.  A major re-ordering of the interior took place in 2004.