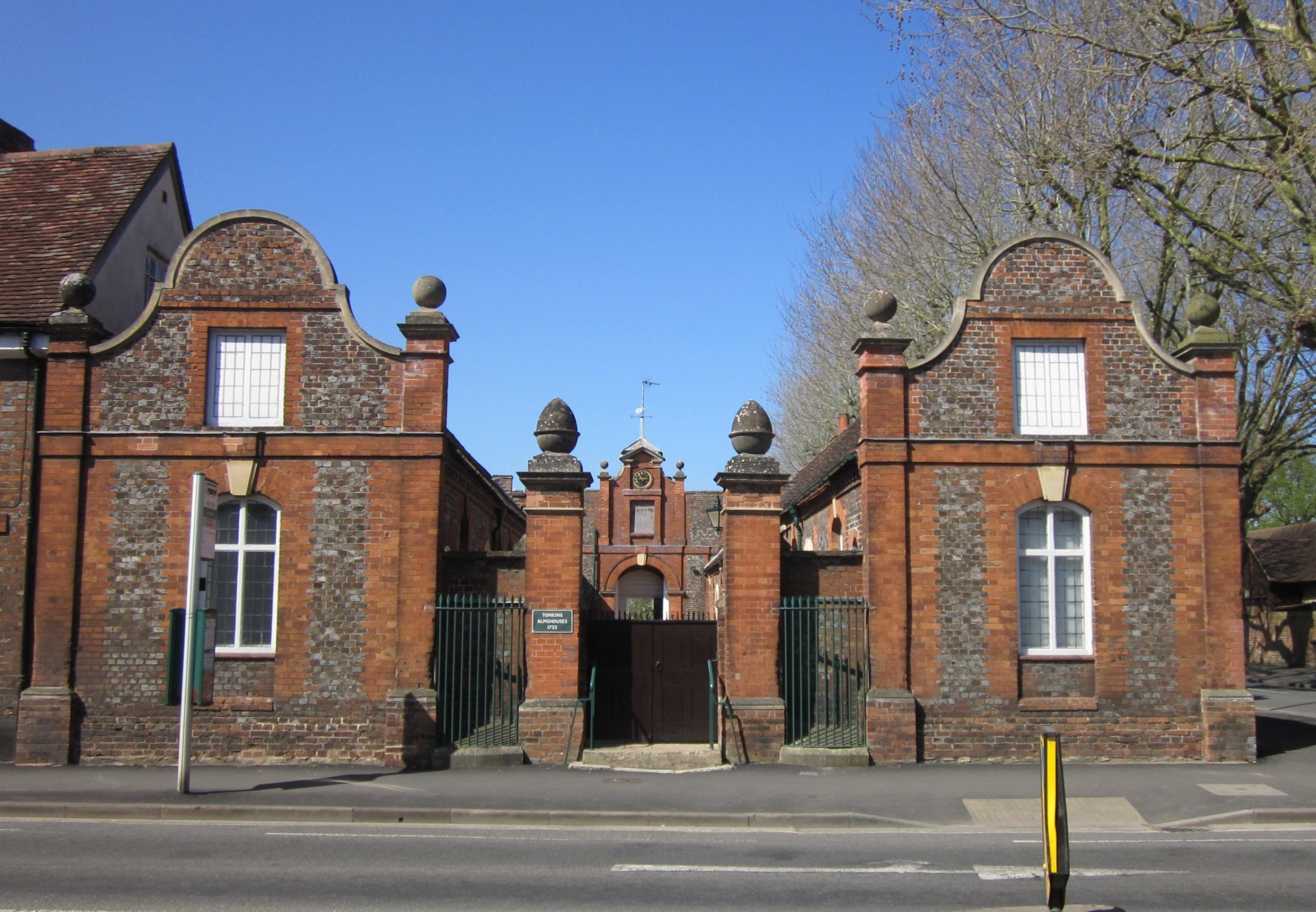 Benjamin Tomkins was a rich maltster in Abingdon and a staunch Baptist. In 1732 he left £1600 in his will as the endowment for an almshouse for ‘four Poor Men and four Poor Women for Ever’.  He also specified the layout, and the builders were probably the local men Samuel Westbrook and Charles Etty. As well as being almost exactly as built in 1733, the Tomkins almshouses are one of the few buildings in Abingdon that make an architectural statement. The almshouses were conveyed to Christ’s Hospital in 1987.

The accommodation (see map) was arranged in two rows facing each other across a courtyard, and each resident had two rooms, each 12ft square. Although there are now slight differences between the units, their basic layout is the same – a central doorway opens into the living room, which had a corner fireplace; the other room was the bedroom. The facilities were modernised in the 1950s with the inclusion of kitchen units in the living room and a toilet and shower room in the bedroom. In 2002 there were further rearrangements and upgradings.

The central courtyard is strictly symmetrical and each side has a crenellated centrepiece with a taller doorway than those to the individual units. These led to the pump and the toilet. At the far end is a ‘gatehouse’ leading to a small garden. Tomkins’ will specified that each resident should have a plot – presumably to grow vegetables – but over the years it has become a communal area for rest and relaxation.

We do not know who designed the almshouses. Most examples of this tight courtyard plan are some distance from Abingdon, for example Ford’s Hospital in Coventry (around 1509) and the Trinity Almshouses in Salisbury (founded 1379 but rebuilt in 1702). The local example at Lyford is more open but may have been the model.

The architectural details, however, were not specified in the will. The shaped gables are typical of  ‘artisan mannerism’, and the battlements are an early example of the ‘castle style’ of the early Gothic revival. The frontispiece at the end of the courtyard is in concept a triumphal arch. The meaning of this is multi-layered. Clearly it says that the charity of the Baptists was as great as that of the Anglican elite who supported Christ’s Hospital, but its use of eclectic architectural features and commemorative details convey the message that while Tomkins was successful and triumphant in life, he was also triumphant in death ‘for Ever’ through his endowment.

We know the names of the residents and something of the arrangements there in the nineteenth century from the available censuses. For example in 1901 three of the residents had other family members staying with them on census night. While these may have been casual visitors, some may have been live-in carers for their relatives. Later in the century it seems that couples were living there together.

Life in the almshouses has in some ways changed dramatically since 1733, with modern facilities and heating supplied from a central boiler, yet if Benjamin Tomkins were to return today he would recognise many features of his foundation. The residents are largely self-sufficient, yet they share tasks and are very much a community.