The Bear Club of Abingdon 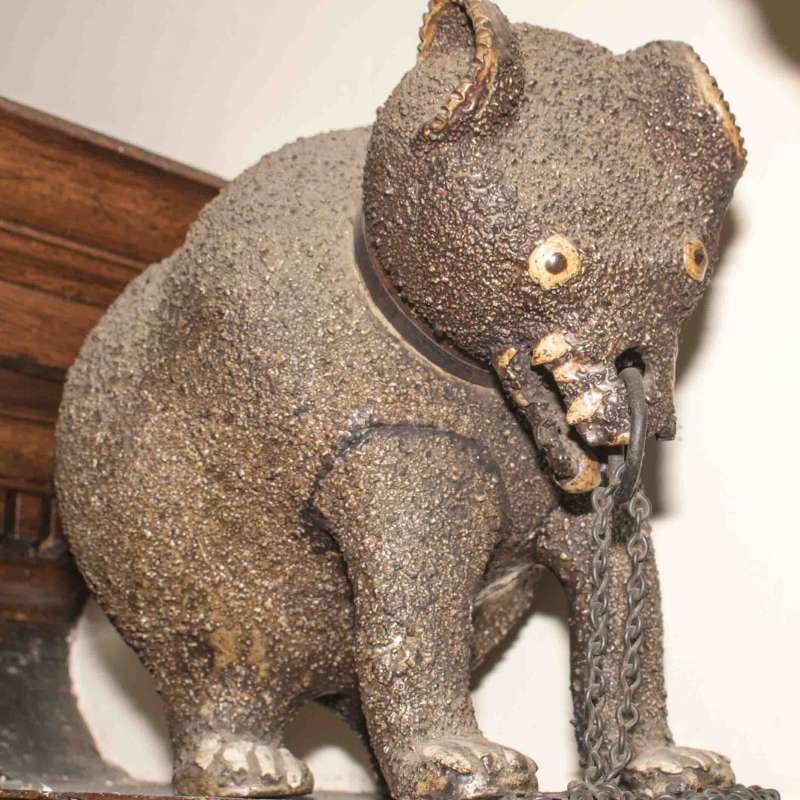 The Bear Club’s mascot, now at the Guildhall(© Michael Harrison 2016)

In the eighteenth century, a number of prominent people in Abingdon decided to create a club with the object of enjoyment, feasting and fraternal companionship.  It was named after what was probably its first meeting place, the Bear Inn on Stert Street; but it moved several times. In 1832 it was meeting at Parson’s Reading Room in the now demolished building at the corner of Bridge Street and the Market Place. It later moved to the Lion on the High Street and later again to the Crown and Thistle. It also sometimes met in the Small Council Chamber in the Guildhall. Its mascot, a brown Staffordshire porcelain bear, is there even now in what is called the Bear Room.  There have been several restarts, but that club continues today.  This, in brief, is its story.

The Bear Club of Abingdon was formed in 1767, and although there is little hard information as to its creation, reasons are thought to have been the £20,000 state lottery win of cooper John Alder who kept the Mitre Inn and whose generosity led his friends to form the club. The two inns were both on the east side of Stert Street, the Mitre at what is now number 59 and the Bear at 21.  The growing interest in political matters, and perhaps the Abingdon races which were in full operation by 1767, would have brought local men of influence together to enjoy themselves in town both before the races, at cockfighting battles, and after the races, in local hostelries.   They no doubt decided to make this feasting and enjoyment a rather more regular event. Membership was, and remains today, exclusively male.

Little is known of the early days, but by the mid-nineteenth century the club was meeting regularly at the Crown and Thistle.  It had at that time between seventeen and twenty members, met on a Tuesday and held Annual General Meetings. The members would have been any local nobility, town councillors and the mayor, and the better sort of businessman or professional.   Indeed, the club’s membership list over the years included a fair number of Borough Council members: Bromley Challenor, John Hyde, John Tomkins, John Spenlove and William Strange. E J Trendell in 1851 presented the club with an inscribed silver snuff or tobacco box which is now owned by the Council and brought out on civic occasions. One suspects that the vicar or doctor would have been eligible for membership had they wished to apply and been elected, but a sales assistant would not have been. The club and its members were headed by a Secretary.

The activities of club members at these meetings appear to have been mainly conversation, drinking and feasting, playing cards and betting and gaming (such as dicing, roulette, even-odd tables), but in a ‘light and flippant mood’.   Indeed, betting is mentioned often in the later records and appears to have been a major activity of members.  As well as hazarding money on horses, they might bet on the likelihood of personal events such as being elected mayor, having a marriage proposal accepted, or pretty well anything else. One of the reasons for this activity taking place in a club was that at least for those further down the social ladder, betting was generally illegal.  However, gentlemen’s clubs used the defence that they were private, and the general public could not ’resort’ to them in order to place bets, so they were exempt from the law.  This appears always to have worked and was another reason for the popularity of such establishments.

The club records say nothing about the period before 1843, when it moved from the Lion to the Crown and Thistle. It seems to have gone into decline in the 1830s and 1840s, and was indeed dissolved in 1850 but reformed the next day. However, between 1843 and 1878 it met a total of 780 times either at the Crown and Thistle or at the Guildhall. This thirty-five-year period therefore saw around twenty-two meetings of the club each year, or one every two to three weeks. It was early in this period that the club acquired its ceramic mascot at a cost of 5 shillings.

The Club seems to have disappeared from 1878 until the creation of the ’21 Club’ in 1947. This was formed ‘spontaneously’ by some customers of the Queen’s Hotel in the Market Place. Its objects were purely social, following the tradition of the old Bear Club. They resolved that the club would have twenty-one members, being businessmen and professionals.  It would be non-political and non-sectarian and have no fixed constitution.  There would be a Convener who was to be responsible for dinner arrangements and collection of expenses from members.

Members soon realised that this club closely resembled the old Bear Club.  In 1955 the old name was re-adopted and the Bear Club of Abingdon was thus revived. Membership is much sought after in Abingdon. Like its early predecessor, the club’s informality and its philosophy of eating, drinking and being merry, its lack of rules and formality and of course its donations to local charities help to ensure its continuing success.

The Club, led by its Convener and Treasurer, continues to thrive today and continues its charitable work.   Membership is set at a maximum of thirty. In 2015 there were twenty-nine members. The club does not own any premises and its possessions are the porcelain Bear, some other small items, and its paper documentation. It still meets occasionally in the Crown and Thistle and is indeed that establishment’s oldest customer. In 2017 its eight annual meetings are due to be held in, among others, the Chequers at Charney Bassett, the King’s Head and Bell in Abingdon and the Fox at Denchworth.

The author wishes to acknowledge information from and access to documents in the keeping of Mr Marcus Smith, Secretary of the Bear Club.

Footer
The Archaeology of Abingdon