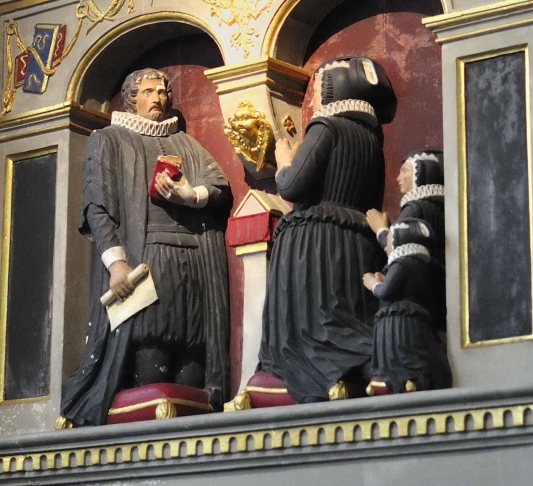 The sixteenth century was a period of economic upheaval which provided great opportunities to the able and ambitious. The Blacknall family is a case in point, moving in four generations from obscurity in a Buckinghamshire village into the landed gentry of the same county. On the way, their activities were highly beneficial to Abingdon, providing the town with industry and employment and helping it to recover from the shock of the dissolution of its Abbey and the abolition of its guilds.

William Blacknall was from a family long settled in Wing, Buckinghamshire. By 1545, when his son was born, he had married and moved to Hambleden, near Henley, and it was probably there that he acquired the knowledge of milling that he would later put to good use.

In 1548, John Wellesbourne, leaseholder under the Crown of the Abbey site in Abingdon, died.  He had done nothing to develop the site, and the fulling mill that had operated there had been allowed to decay. The body that administered the properties of the dissolved abbeys was the Court of Augmentations, and this, through its Berkshire agent Roger Amyce, was responsible for the town’s well-being. It is not clear whether Blacknall took the initiative or whether Amyce invited him, but Blacknall now came to Abingdon to take over the mills. The two men would work closely together.

The Court of Augmentations arranged a series of back-to-back deals whereby Blacknall ended up with effective ownership of the Abbey site and the fulling and corn mills. He also gained control of the waters that powered the mills and monopoly rights of fishing in them.  Blacknall and Amyce jointly tested the arrangement in a court case, and it was confirmed in great detail in the municipal charter that was granted to Abingdon in 1556.

The court did not provide money but Blacknall was able to set up a consortium to raise the capital he needed. His greatest talent seems to have been in putting together finance for expanding his affairs. Once he had obtained the Abbey site, he raised money on it from within his family and bought an interest in mills at Sheepbridge near Swallowfield where he went to live for three or four years. Swallowfield was a Wiltshire enclave in Berkshire, south of Reading. For many years thereafter Blacknall was ‘a miller of Swallowfield’ in legal documents, although in fact he returned to Abingdon, becoming active in municipal affairs and serving twice as mayor. By the time he died in 1585 he was a rich man, with property in various parts of Berkshire and neighbouring counties.

Blacknall’s son, William jnr (1545-1614), continued on his father’s path, managing his milling and fishing interests and purchasing more property. He married a member of the Ayshcombe family of Lyford, local gentry, which added to his money-raising abilities. The family was now moving decisively up the social scale. William jnr’s son, John, born in 1583, married a daughter of the Blagraves of Bulmershe, a gentry family high in the Berkshire pecking order. He studied at Oxford and read law at the Middle Temple, but would not demean himself by practising. He continued to acquire ever more land, but industrial management held no interest for him; as soon as his father died in 1613, the Abbey mills were sold off. He and his wife both died in the plague of 1625 – they have a memorial in St Nicolas church – leaving two young daughters, one of whom followed them soon after. The survivor, Mary, sole heiress to a fortune of £16,000, was married to the son and heir of Sir Edmund Verney of Middle Claydon, Bucks.  She has an article of her own on this website.