You are here: Home1 / Abingdon County Hall Museum2 / About the Museum
Main content 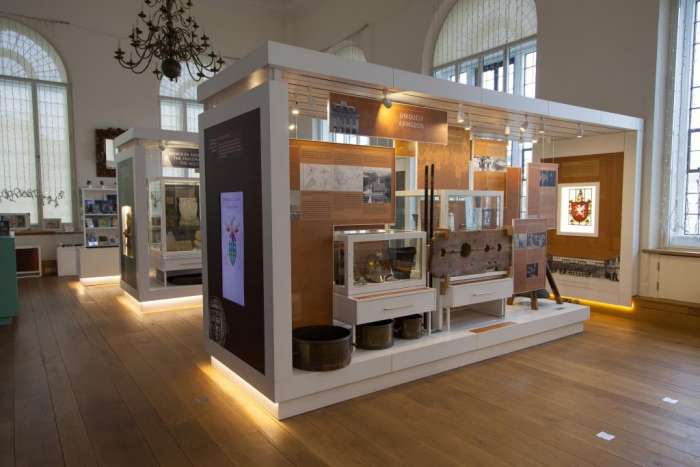 The County Hall, completed in 1682, is on the south side of Abingdon Market Place. It was built by stonemason Christopher Kempster, who worked with Sir Christopher Wren on rebuilding churches in London after the Great Fire of 1666.

Originally used as a courtroom for the Berkshire Assizes, the County Hall has also been a venue for entertainment and since 1761 the venue for the traditional ‘bun throwing’ to commemorate royal events. A museum was first set up in the building in 1919.

The museum re-opened in 2012 after extensive building restoration work and redisplay of the museum collections as part of a Heritage Lottery Fund project.

Volunteers are very important to our continuing success as a local museum. With an ever increasing number of visitors each year we require a strong team of volunteers to help advise and guide throughout the year. We welcome applications, to apply please collect an application form from the Museum Reception and return either by email to Abingdon.museum@abingdon.gov.uk or by post to:

Abingdon Museum Friends is a registered charity that supports and assists the museum.  There is a varied programme of lectures, visits and activities for members and guests, and many individuals volunteer to help at the museum. To find out more, please follow this link to the Museum Friends pages.

The museum is very grateful to everyone who has helped with fundraising, especially to the many organisations and individuals who assisted with financial contributions to match the recent Heritage Lottery Fund award to repair the building and establish new museum displays.

If you are able to help the museum, please contact the Museum Curator

If you are planning a group visit to the museum, please contact us to discuss your requirements. We are able to offer a number of special extras:

Please also see our Accessibility Guide in advance of your visit