Sampson Strong was the painter who was responsible for many of the portraits which to this day adorn the hall of the Long Alley almshouses, and for at least some of the pictures and moralistic texts around the building.

Strong was born in Holland; his original surname was Stark. Nothing is known of him until the 1590s, by which time he was settled in St Aldates and plying his trade in and around Oxford.  He had obviously served an apprenticeship as a painter, most probably in his native country where the craft of painting was more widely practised and technically advanced than in England. Strong’s status was as an artisan rather than an artist. He was plainly capable of working to a fairly high standard, but the quality of most of his output was determined by what his clients were willing to pay. Materials, especially pigments, were expensive, and detailed work took much time. Even cheap portraits were luxury items; the going rate was between £2 and £6 when a craftsman could hardly earn a pound in a month.

The market in which Strong operated was largely for civic or institutional portraiture. Portraits would be commissioned by the subject himself, or by his family after his death, or by an institution in which he had been active. In the two former cases, the portrait, or a copy of it, might nonetheless finish on the walls of the institution. There was probably more copying of existing portraits than production of original ones, and much of Strong’s surviving oeuvre is of long-dead founders intended to hang in college halls. It does seem that he saw the university as his main source of custom. It may be that as a foreigner he was excluded from practising in the town, and this would be why in 1590 he matriculated at Magdalen College as a ‘limner’ (painter). He was well above the usual age for students, and certainly never took a degree. Nonetheless, he painted at least one portrait for the Oxford corporation. This was of the philanthropist Sir Thomas White, and was one of many copies of an original made during the sitter’s lifetime in 1566.

Sir Thomas White, painted by Strong for the Oxford Corporation. He was paid £3 for it. Sampson Strong [Public domain], via Wikimedia Commons

Since the prime purpose of the portraits was commemoration rather than representation, it mattered little if the features were not true to life or indeed completely imaginary. What was important was the persona that was on show – the bearing, the clothes, indicators of status like chains or rods of office, of wealth like gloves and hats, or of achievement like scrolls and books. 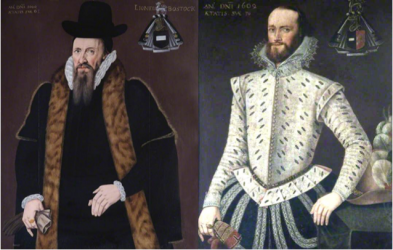 Lionel and William Bostock. Father and son, as commissioned by the son. Compare the gloves and the hats. (Christ’s Hospital of Abingdon; reproduced by permission of the Governors.)

About this time Francis Little was organising the rebuilding of the Long Alley almshouses which he wanted to adorn with portraits of past benefactors. He commissioned Strong to paint at least some of the scenes and mottos on the outside walls and the gables as well as the picture of the market cross, which Little had refurbished at his own cost, on the end wall facing the river. Strong seems to have spent much of the year 1607 working for, or in, Abingdon. 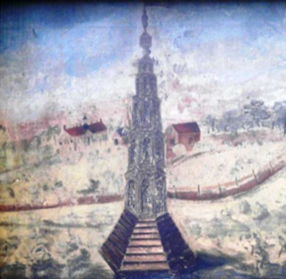 The Abingdon Market Cross, painted by Strong on the south wall of the Long Alley Almshouses (© M Brod 2010)

It was almost certainly also Strong who painted the double portrait of the bridge builders which was commissioned by Little for presentation to Christ’s Hospital. It claims to represent Jeffrey Barbour and John Howchion holding the bag of money that they devoted to the building of the Abingdon bridge in 1416. It was a more ambitious work than any other in his surviving oeuvre. In line with Little’s personal preoccupations, it is designed to show continuity between the fifteenth century projects of the Holy Cross fraternity – the bridges and causeway – and those of Christ’s Hospital two hundred years later. It depicts both the causeway under construction and the newly refurbished Long Alley almshouses, with their new lantern. The builders are in seventeenth century dress, and Barbour is distinguished by the red gown he wears as a sometime Bristol councillor. Both have the same face.

The picture exists in duplicate, from which AE Preston concluded that one copy had been intended for Little’s family, that the face must be that of Little himself, and that the basic intention had been to commemorate Little’s own contribution to the town while distinguishing him from his predecessors and contemporaries with a non-standard style of portrait.

How many of the portraits at present in the almshouse hall and attributed to Sampson Strong were actually his work is questionable. Proof of payment exists for three, those of Henry VI, Edward VI, and John Parkins. The ArtUK website accepts the first two of these, but not the third, to be undoubtedly the work of Strong. The historian Robert Tittler, who visited Abingdon in 2002 while preparing his book on early civic portraiture, considers only that of Sir John Mason to be beyond doubt, but gives no reason for his judgement.* On the other hand, A E Preston, who studied the circumstances of the portraits’ acquisition and had access to the Christ’s Hospital records, was confident of at least eight. Tittler lists six possible Strong portraits in Oxford colleges, of which he considers four as certain, and one in the Oxford Town Hall.

Strong died in 1611. A son, also Sampson, became an innkeeper and a member of the Oxford town waits.