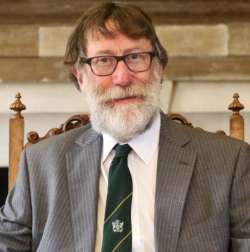 Cllr Jim Halliday represents Peachcroft ward. He is the Deputy Leader of the Council. He sits on the Amenities & Recreation Committee, the Guildhall Committee, the Planning, Highways and Consultations Committee and the Traffic Advisory Committee.

Cllr Jim Halliday was Mayor of Abingdon-on-Thames for the year 1995/6.

He can be contacted by email at jim.halliday@abingdon.gov.uk.