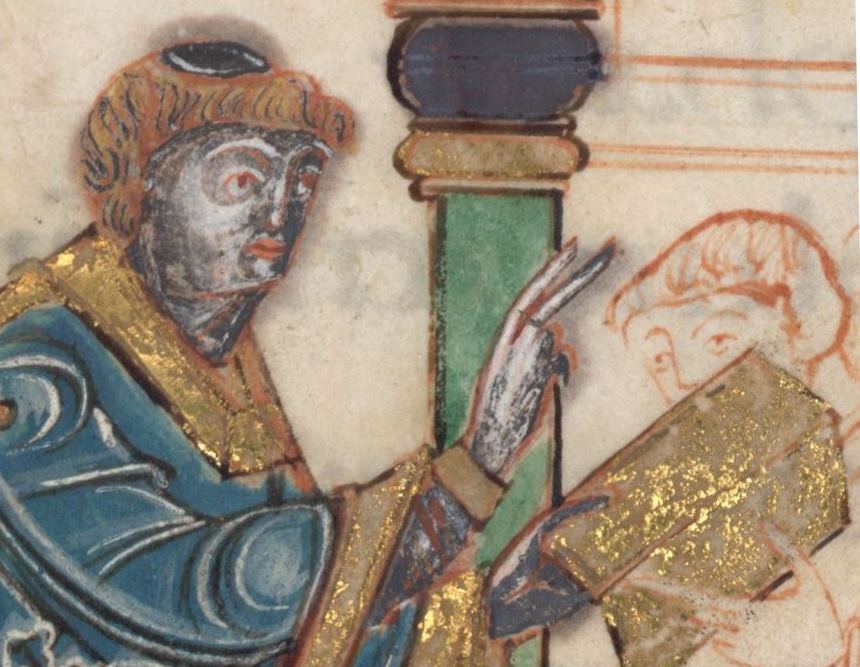 Aethelwold, Abbot of Abingdon from 954 to 963 and thereafter Bishop of Winchester, was one of the three men who brought England into the movement for monastic reform that had started in continental Europe earlier in the century. The others were Dunstan, abbot of Glastonbury and later Archbishop of Canterbury, and Oswald, Bishop of Worcester and Archbishop of York.

Aethelwold’s career started at Glastonbury which, under Dunstan, was the first of the English monasteries to be reformed according to the rule of St Benedict. His transfer to Abingdon was the first extension of the movement outside Glastonbury, and Abingdon Abbey was to prove a prototype of what could be achieved. Like most of the earlier foundations, it had declined into an impoverished group of priests who neither followed monastic rules nor practised community of goods, and might be married. Aethelwold replaced them with monks of his own choice. He ruthlessly reclaimed estates that had been alienated, caring little for the rights of their current owners, and raised further endowments from the king and the royal family. The abbey was transformed into a place of splendour, with buildings in the latest continental style, liturgical equipment rich in silver and gold, elaborate ceremonial, and the production of music, poetry, and illuminated manuscripts. The future king, Edgar, was educated there.

It was Edgar who became Aethelwold’s principal patron. In 963, he moved Aethelwold to Winchester, where the Old and New Minsters were reformed in the same way but on a larger scale. It was an innovation that cathedrals and monasteries were to be unified and staffed entirely by monks; among the reformers, it was Aethelwold who was most aggressively committed to the principle that there was little room in the church for clerics who were not under monastic discipline. Once at Winchester, he started an intense programme of similar reforms elsewhere, sending out trained and committed monks as abbots and serving Edgar’s political interests by expanding his influence eastwards into regions where it had not previously been strong. Two of Aethelwold’s re-foundations, Ely and Peterborough, survive as major cathedrals.

At his death in 984, Aethelwold left behind a reform movement in vigorous expansion thanks to a generation of monks he had trained; a corpus of writings that included classical scholarship, religious manuals, and poetry; a ‘Winchester School’ of manuscript illumination; and a group of former pupils who venerated him and ensured his canonisation as St Aethelwold.

Faricius was one of the two greatest abbots of Abingdon Abbey. Aethelwold, a century and a half before him, was the other.

Faricius was an Italian from Arezzo in Tuscany. Nothing is known of his early career, but before the end of the eleventh century he was a monk at the abbey of Malmesbury, already with a reputation for learning and, especially, for his medical skills.

At this time, Abingdon Abbey was in difficulty. King William Rufus had despoiled it and left it for three years without an abbot. Many of its estates had been taken and sold off. Its buildings were so dilapidated that the monks had to sleep in the church. But in 1100, William Rufus died and was succeeded by his brother Henry I. Henry allowed Faricius to be appointed abbot.

As a medical man, Faricius treated the king and many of the most prominent people of his time, and also their wives and mistresses. He was especially good at helping women in childbirth. Thus, when he set about restoring the Abbey’s lost properties, which he did in a very aggressive manner, he tended to find favour with the king and in the law courts. He was even given estates by grateful patients. The Abbey’s finances were transformed. Faricius started a great building programme; in his time, the nave of the church was completed and the crossing, which would support the central tower, was built up to window level. He rebuilt the domestic ranges, and added private quarters for himself as abbot. Manuscripts were produced, saints’ relics and liturgical utensils and vestments acquired, and the Abbey became once more a place of splendour.

When there was a vacancy in the archbishopric of Canterbury, Henry wanted to appoint Faricius, but was prevented by the opposition of his minister, Roger of Salisbury, who seems to have feared that Faricius’s autocratic nature would be a cause of trouble. There was certainly a development of discontent in the monastery, and some of the monks complained to the king about a reduction of their cheese ration. Roger headed a high level investigation which found against Faricius and the cheese ration was restored. Faricius died soon after, in 1117.