An abbot of Abingdon was in a good position to develop his career.  He could use the financial means of the Abbey as he chose; he lived and entertained on as lavish a scale as he wanted; and in the House of Lords could mix familiarly, if not quite on equal terms, with the highest in the land. Perhaps surprisingly, few of the abbots seem to have had ambitions beyond the abbacy itself. The great exception was John Sant, abbot from 1468 to his death in 1496.

Nothing is known of Sant’s birth or early career, beyond that he had a degree in theology from Oxford.[1] Nor do we know how he came to be made abbot, which must have required at least a nominal election by the Abingdon monks. The shield on the lower left side of his abbatial seal has a lion rampant with a characteristically elaborate tail; this is the family device of Jaquetta of Luxembourg and was also used by her daughter, Elizabeth Woodville, who had recently married Edward IV. It thus seems probable that he owed his elevation to Woodville patronage.

It was in August 1474 that Sant, described as a member of Edward IV’s council, was sent on a mission to Ferdinand, King of Sicily and Duke Federico of Urbino to solicit their support for Edward’s planned invasion of France.[2] The meeting probably took place during February 1475 in Rome where these potentates were conferring with Francesco della Rovere, Pope Sixtus IV.[3] Sant seems to have made a good impression on the pope. The della Rovere badge of an oak tree eradicated (uprooted) would also figure on his seal.

In the following two years, allegedly at Edward’s request, he was named as papal nuncio and then as legate de latere to England, Ireland and Wales. His mission was twofold. He was to preach the jubilee that Sixtus had proclaimed for 1475, and collect contributions from those who had not made their pilgrimage to Rome, in exchange for which they would receive indulgences – exemptions from the pains of purgatory for a given time.  At least one such indulgence –and possibly most or all of them – was among the earliest products of William Caxton’s printing press.[4] 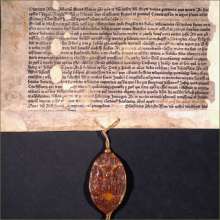 Indulgence issued by Sant as papal legate. (Courtesy of The National Archives)

More controversially, Sant was also to investigate ecclesiastical institutions in the three countries and correct abuses. The pope provided him with a passport valid for one year and covering a retinue of up to twenty-four people. [5]

Sant plainly took his duties seriously, and met with opposition. He suspended the abbot of St Augustine’s, Canterbury, and was refused entry to the abbey at Glastonbury unless accompanied by the local bishop. Questions were raised over his handling of the donations made for the jubilee, and in December 1478 the pope sent a senior lawyer to investigate, with power to dismiss him and take his place if necessary. The matter seems to have been settled, and by 1479 his critics were described in papal correspondence as ‘certain sons of iniquity’.[6]

In fact, Sant seems to have been in Rome again during 1478. In September he was enrolled as a member of a fraternity at the Hospice of San Spirito in Sassia.[7] The church of San Spirito had been founded by King Ine of Wessex in the eighth century as a centre for Saxon soldiers and pilgrims; Sixtus had taken an interest in it and had recently joined to it a hospice for foundling children.[8] Sant was obviously ingratiating himself in an appropriate manner with the pope. And again in April 1479 Edward sent Sant, named both as a papal representative and as ‘one of the lords of our parliament’, along with three other churchmen, to discuss the state of Christian orthodoxy with the pope and other Italian princes. This was presumably to allow him to report on his findings as legate.[9]

Sant seems then to have retired to his routine duties as Abbot of Abingdon, and he was one of two abbots who officiated at the funeral of Edward IV in 1483.[10] But in 1485 his world was torn apart. Henry Tudor won the Battle of Bosworth. The last Yorkist king, Richard III, was killed, and Henry seated himself as Henry VII on a decidedly shaky throne. Contemporaries could not know that the Wars of the Roses were at an end; to them, Henry was merely the latest in a series of usurpers and his tenure was likely to be brief.

Abingdon – both Abbey and town – was strongly Yorkist. Richard II had been a frequent visitor.  It was at Abingdon in 1460 that Richard of York had turned his journey from Ireland towards London into a quasi-regal progress that would end in a fatally misguided attempt to claim the crown for himself. A ‘black monk’ of Abingdon had betrayed Henry VI to his enemies in 1465. Edward’s troops had encamped at Abingdon in 1471 on their way to the decisive battle at Tewkesbury. And, most important, Abingdon was in the sphere of influence of two leading Yorkist families: the de la Poles, Dukes of Suffolk and Earls of Lincoln, with their seat at Ewelme, and the Lovells of Minster Lovell. Only in the previous year, 1484, the Duke of Suffolk and Viscount Lovell jointly with other members of their families had obtained a new charter for the Fraternity of the Holy Cross, expanding its financial powers.[11]

Within a year of Bosworth, two prominent Yorkists, Sir Humphrey Stafford and his brother John, fleeing from an unsuccessful attempt at revolt near Worcester, went to ground in Culham church, a property of Abingdon Abbey with a long history as a place of sanctuary. Nonetheless, they were pulled out by the king’s men and duly put on trial. Sant strongly defended traditional rights of sanctuary, but the court reluctantly found against him; Humphrey Stafford was executed, his brother pardoned, and Sant was bound over with a caution fixed at a sum that was probably more than a third of the Abbey’s annual income. It was Henry’s policy to tie men to him neither by love nor fear but through their pockets.[12]

Henry was confident enough of Sant’s loyalty to make repeated visits to Abingdon Abbey and to make use once more of the abbot’s diplomatic skills. In 1488, he sent Sant as one of a three-man embassy to Charles VII of France and Francis II, Duke of Brittany, in the hopes of brokering a peace between them and making it unnecessary for him to choose sides. The Bretons proved intransigent and the French in bad faith, and the three came home empty-handed.

But Henry had misjudged. In 1487, Sant had met with two Abingdon men, Christopher Swann and John Mayne. Swann is described as ‘bailiff of Abingdon’ and must have been a man of substance.  Sant had given Mayne a sum of money, with which he had left the country to join the Earl of Lincoln and Viscount Lovell who were in Flanders preparing an invasion force. Their campaign ended at the battle of Stoke, where Lincoln was killed. But Mayne survived, and resurfaced at the end of 1489. With two Yorkist diehards who had been courtiers to Richard III and a mysterious London priest who may have been an undercover Henrician agent, he planned to free the young Earl of Warwick, nephew of the two Yorkist kings and legitimate heir to the throne, from captivity in the Tower, and raise a revolt with him as the figurehead. Sant agreed to provide finance, and used the Abbey kitchener, Miles Salley, as an intermediary to transfer the funds.

The plot was soon discovered, and all concerned were arrested. Mayne and some of the others were already under nominal sentence of death for their involvement in Lincoln’s revolt, and were executed without further ado. Swann and Salley were tried and sentenced, but later pardoned. Salley would go on to become abbot of Eynsham and Bishop of Llandaff. Swann’s pardon seems to have been posthumous, probably a legal fiction to enable his son to inherit.[13] Sant himself was in prison for several months and was tried in September 1490. He was sentenced to pay a fine equivalent to about half the Abbey’s yearly income and to lose all ‘his’ manors and goods, although these were actually the Abbey’s property. They were restored for a moderate payment in 1493.[14] Sant died in 1496, having bequeathed his personal possessions to Henry ‘in token of all the grace shown to him’. Berkshire, and particularly Abingdon, remained in a state of unrest for some time.[15] 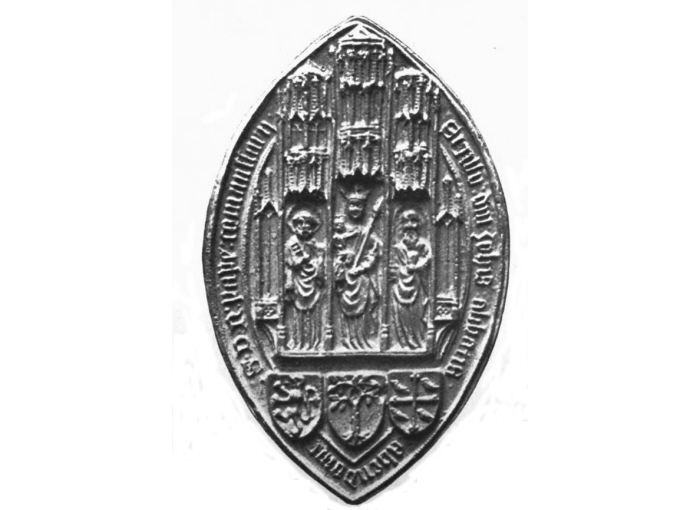