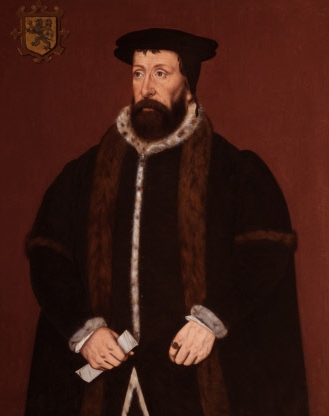 John Mason was an important patron of Abingdon in its transition from a property of the abbey to a chartered borough under its own mayor and corporation.

He was born about 1503 to a woman supposed to be a sister of Thomas Pentecost, the last Abbot of Abingdon. Nothing is known of his father, and there were always rumours that he was an illegitimate son of the abbot himself. Certainly, it was the abbot who saw to his education. Studies in Oxford, Paris, and at Valladolid in Spain prepared him for a successful career as a diplomat. He became a member of the group of humanist intellectuals around William Cecil, the future Lord Burleigh, although older than most of them; and his achievements included a knighthood and the chancellorship of Oxford University.

Although he was never resident in Abingdon, Mason maintained his connection to the town. He acquired a life interest in the site of the abbey after its dissolution, which he afterwards sold on. When the question of a town charter was first mooted in 1551, he opposed it, but seems afterwards to have relented. In 1553, it was he who persuaded the Privy Council, of which he was by then a member, to permit the setting up of Christ’s Hospital to replace the old Holy Cross Fraternity that had been dissolved, and to grant it a charter and adequate sources of income. He was the first Master of the Hospital, and gave it its first set of rules. He must have been involved in the grant of Abingdon’s first charter as a borough, although no details of his role have come down to us, and he certainly nominated its first Member of Parliament.

Mason died in 1566, having served four Tudor monarchs, become reasonably but not excessively rich, and earned the thanks of his native town.