Archive for: Lawyer and Judge and Member of Parliament

You are here: Home1 / Lawyer and Judge and Member of Parliament
Main content 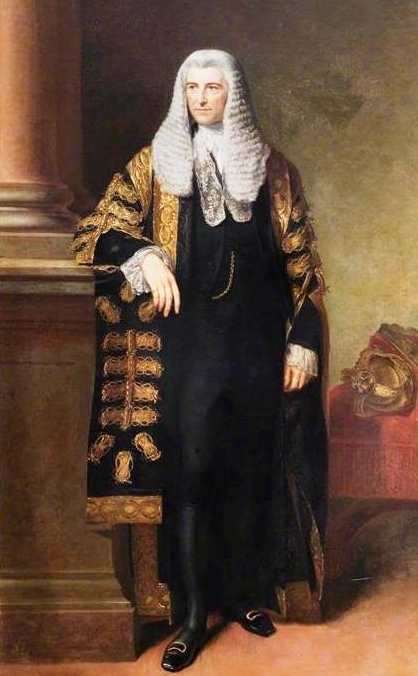 Frederick Thesiger was the most distinguished of Abingdon’s nineteenth century MPs, rising to the position of Lord Chancellor. However his commitment to the borough was slight and his local support uncertain and after eight years he moved to a safer seat. This article focuses on his time as Abingdon’s MP using information from press reports on his election campaigns.

Thesiger’s paternal grandfather was originally from Saxony but settled in England. His father had lands and a position in St Vincent in the West Indies. In his early teens Thesiger joined the navy as a midshipman but left after one or two years when, on his brother’s death, he became heir to his father’s estates and moved back to St Vincent.  But not long afterwards his plans had to change again – the family’s estates were destroyed by a volcanic eruption, causing a considerable financial loss. Thesiger went to London to train as a barrister and began a very successful legal career.

He entered parliament for Woodstock in 1840 as a Conservative under the patronage of the Duke of Marlborough. This was not an unusual move as successful barristers often sought a parliamentary seat as a way of furthering their careers. In 1844 he was appointed Solicitor General, causing a by-election because, at this time, an MP had to seek re-election if he accepted a government position. But the duke no longer supported him and he did not contest the election.

Shortly afterwards the sitting MP for Abingdon, Thomas Duffield, unexpectedly resigned and Thesiger was returned unopposed in the resulting by-election. Reaction in the press was varied and why Duffield retired remains a mystery.

In 1845 Thesiger was promoted to Attorney General, the government’s leading legal officer, which triggered another by-election and this time there was a contest in Abingdon which was given extensive coverage in the local press. His opponent was General Caulfield, recently retired from the Indian Army. Caulfield emphasised his independence of party ties and his willingness to follow the wishes of his constituents. He also emphasised the importance of voting, and that voters should consider other interests besides their own. At this time the population of Abingdon was about 5500 and the electorate 323. Thesiger declared he was proud to be part of Sir Robert Peel’s government and defended his and the government’s record. The opposition’s main issues during the election were Thesiger’s support of Peel’s proposal to increase the annual grant to the Catholic Maynooth College in Ireland and his lack of freedom as a member of the government to support local causes. The Maynooth grant was a national issue − there were strong objections to using taxpayers’ money to support a Catholic institution and the degree of opposition to this both nationally and locally indicates the strength of anti-Catholic feeling at the time.  Thesiger won by 156 votes to 126.

Thesiger lost his position as Attorney General when Peel’s government fell in1846 after the repeal of the Corn Laws and the subsequent split in the Conservative party. In the general election the following year Thesiger was once more challenged by Caulfield . Thesiger again defended the government’s record while Caulfield again emphasised his independence, but this time the result was very close. It was only saved from being a dead heat by one elector who voted unintentionally for Thesiger but was not permitted to correct his vote, and Thesinger was declared elected by 153 votes to 151. There were accusations of bribery and intimidation from both sides.

Early in 1852 Lord Derby became prime minister of a Conservative government and appointed Thesiger as Attorney General again. This led to another by-election in Abingdon but this time Caulfield issued a statement saying he would not stand against Thesiger. Thesiger was elected unopposed and it soon became clear that he and Caulfield had reached an agreement – he concluded his address to the electors by stating he would not oppose Caulfield at the following parliamentary election.

This probably came sooner than expected, in July the same year, and Caulfield was elected unopposed in Abingdon while Thesiger was elected unopposed in Stamford under the patronage of the Marquis of Exeter. However Caulfield was never able to take his seat – he died before the start of the next session of Parliament. His death led to another by-election which was held in December and was won by Lord Norreys (son of the Earl of Abingdon), a Liberal. Thus Abingdon had three elections in 1852 and three MPs of different parties: a Conservative (Thesiger), an Independent (Caulfield) and a Liberal (Lord Norreys).

Thesiger continued as MP for Stamford until 1858 when he moved to the Lords after being appointed Lord Chancellor and took the title Baron Chelmsford after a series of successful trials there earlier in his career. He had been an MP for eighteen years and stood in eight elections but had been opposed in only two, those in Abingdon in 1845 and 1847. Hansard records that he contributed to debates in parliament in most years. Changing political fortunes after he was appointed Lord Chancellor meant it was a position he held for only two short periods, 1858-9 and 1866-8, although he remained active as a judge.

Thesiger died at his London home in 1878. He was particularly remembered as a very effective and successful advocate in court. His political career was a means to advance his prospects as a lawyer and his eight years as Abingdon’s MP were just a step along that path.