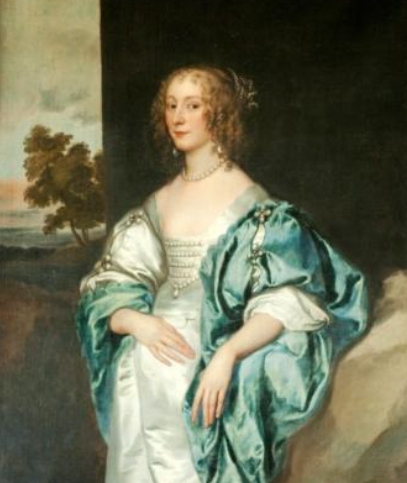 William Blacknall came to Abingdon in the mid-sixteenth century and made a fortune in local industries, operating corn and fulling mills, fisheries, and sailcloth manufacture, and buying up local properties including the site of the old abbey. By the time of his grandson John the industries had been disposed of and John was a significant landowner with properties in various parts of Berkshire and elsewhere. He and his wife both died in the plague of 1625, leaving two young daughters, one of whom died a year after her parents. The remaining girl, Mary, was now sole heiress, and was married at thirteen to Ralph Verney, heir to an estate centred on Middle Claydon in Buckinghamshire, who was two years older. 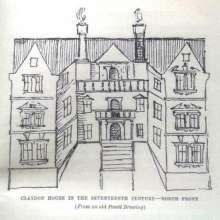 Claydon House in the 17th Century

Mary’s portrait by Van Dyck shows her as a very attractive young woman. The Verneys had a custom of keeping all their letters, and from these she appears as warm, humorous, intelligent, and strong-willed, a good foil for her husband who was serious to the point of pomposity. She became a great favourite especially with the older men of the family, who gave her the pet name of Mischief. The marriage proved a happy one. Mary and Ralph would have seven children, though only two of them would reach adulthood.

The Civil War was disastrous for the Verneys. Ralph’s father was killed early on, fighting for the king. There were serious financial difficulties as Claydon was in a zone of military activity and tenants could not or would not pay their rents. Debts mounted. Ralph sat in parliament as MP for Aylesbury, but gave no active support to the war effort. His position became increasingly difficult. In 1643 he ceased to attend and took his family into exile. They settled at Blois in France. He remained nominally a member of parliament until 1645 when he was formally dismissed.

Once he was no longer an MP, the parliamentary authorities could begin proceedings for the sequestration of his properties. He dared not return to defend them, for fear of arrest either for his political stance or his debts. Mary was sent back to England to oppose the sequestrations. This required careful negotiations, much bribery, and the fabrication of a totally false document. She had to forge the signatures. It was dangerous; the penalty for forgery was death. But the document passed inspection and in early 1648 the sequestrations were lifted.

Mary had been away from her husband for sixteen months during which time she had given birth to a child who did not survive. She returned to Blois, but soon after became ill and in 1650 she died at the age of thirty-four. Ralph, heartbroken, eventually returned to England, but never remarried.

The marriage of Mary Blacknall to Ralph Verney was important for our knowledge of the early history of Abingdon. In 1907 Sir Edmund Verney presented to the town a large collection of documents that had been in the Verney archives. These included some of the Blacknalls’ business papers, which are now in the town archives as the Verney Deeds, and financial records from the Abbey. He also gave the so-called Monks’ Map, dating from about 1550 and showing ownership and riparian rights in the Thames at that time. This is now in the Abingdon County Hall Museum.