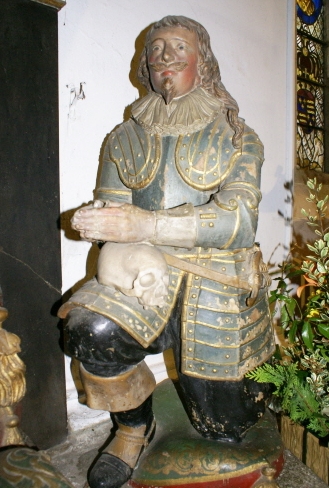 The Stonhouse family – as they are now known – of Radley were influential and at times politically powerful in and around Abingdon from the late sixteenth to the early eighteenth centuries. Their name was originally rendered as Stonehouse or Stonehowse, but the Stonhouse spelling was adopted gradually during the seventeenth century.

George Stonehouse (d. 1573) was of an extensive family in Kent, and first comes to notice in the 1540s as a financial specialist under Henry VIII and Edward VI. After the failure of Thomas Wyatt’s Kentish rebellion against Queen Mary in 1554, he was able to acquire properties confiscated from the rebels.  About 1555, he made an advantageous second marriage to Elizabeth Woodruffe, daughter and sister of prominent Merchants of the Staple – wool exporters, a very lucrative occupation – and became a Stapler himself. In 1560, he bought the Radley estate from Queen Elizabeth for twenty-four times its annual income, making legal arrangements that it could be inherited only by his offspring with Elizabeth. His children from his first marriage seem to have been compensated with properties in Kent.

George’s son William (c. 1556-1632) seems to have been the first Stonehouse to build and reside at Radley. He expanded his local property, was high sheriff of Berkshire in 1606, and in 1628 purchased a baronetcy which would give him and his heirs precedence on official occasions. William’s eldest son John (I) died young but the second, George (II) (1608-75), like his grandfather before him, made an advantageous marriage. This was to Margaret, daughter of Lord Lovelace of Hurley, a leading magnate in Berkshire.

George (II) was high sheriff in 1637-8, became a deputy lieutenant, and was elected to parliament for Abingdon at both elections in 1640. In the Civil War, he joined the king at Oxford, and was heavily fined as a result. After the Restoration, he worked closely with his Lovelace brother-in-law, now lord-lieutenant of Berkshire, purging local councils including that of Abingdon. He returned to parliament, and sat as a magistrate in Abingdon in spite of not being a burgess of the town.

George (II)’s eldest son, George (III) (c. 1638-c.1700) displeased his father by making an unauthorised marriage and was disinherited in favour of his younger brother, John (II) (c.1639-1700). George (II) also took out a second patent of baronetage which John would inherit. The two baronetages would run in parallel until they were reunited by the death unmarried of George (III)’s grandson in 1740.

John (II) replaced his father in parliament at the latter’s death and continued to exercise political authority in Abingdon. In 1686, it was he who brought in a new charter that was imposed on the town by James II. Nonetheless, his Tory credentials were somewhat tarnished by a close relationship with his cousin, the third Lord Lovelace, who had become a local leader of the Whigs, and who was suspected of having ensured John’s re-election in 1689 by manipulating the Whig vote.

The Abingdon seat remained in the family, since Simon Harcourt who won it in 1690 later married John (II)’s stepdaughter. Therefore John (II)’s heir, John (III) (c. 1672-1733), sat from 1701 as knight of the shire for Berkshire. He was much more active in central politics than his father and grandfather had been, following Harcourt into the court party round Harley and Bolingbroke. He had hopes of ministerial office, but the death of Queen Anne in 1714 and the Whig hegemony that followed put an end to them. Thereafter, while keeping his parliamentary seat, he directed his energies primarily to the care of his property. He rebuilt the family residence at Radley, and reorganised and partly enclosed the estate.

John (III) was survived by three sons, John (IV), William (II) and James, all of whom died unmarried. William was the last of the Stonhouse line to reside at Radley; James entered the church and was vicar of Clapham in London. After James’s death the estate devolved upon his niece Penelope, Baroness Rivers, daughter of his sister Penelope and then on Sir Gorge Bowyer, son of another sister, Anne. The baronetcy passed to another Reverend James Stonhouse, descended from the third son of George (II), also James, who had formed a cadet branch of the family based at Tubney.