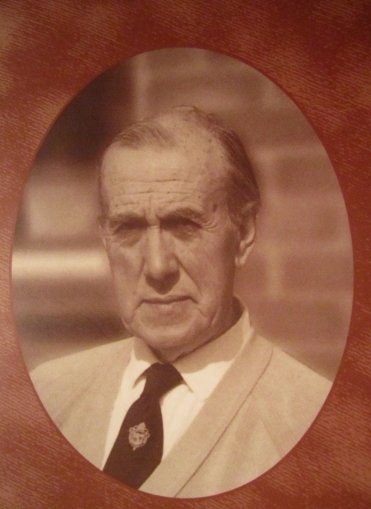 Ronald Harry Williams (1909 – 1993), always known as Ron, was a well-known Abingdon tradesman. He was educated at Culham College School, and was then apprenticed to his father who had a saddlery business in Stert Street.   When motor vehicles began to replace horses, he took over the adjoining shops occupied by his father’s saddlery and his mother’s confectionery business and set up a retail fruit and vegetable business. During World War II he served as an officer in the Abingdon unit of the National Fire Service, having previously been a member of the Volunteer Fire Brigade.  He took part in fighting fires in major cities during heavy German night air raids. In addition to running the business during the difficult years of war-time shortages, he served on the Oxford and District Fruit Committee, allocating scarce supplies. In 1956 he supplied the fruit and vegetables for the lunch given when the Queen opened the restored County Hall.  He retired in 1966 and, with his wife Phyllis, was active in setting up the new Methodist church at Rush Common.