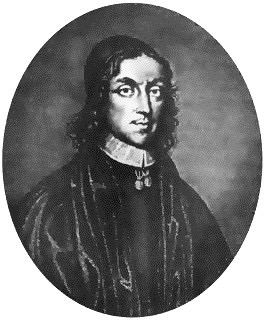 Peter Heylyn was one of the great intellectuals of his time and one of its most enthusiastic controversialists. He was equally at home writing poetry and prose, serious or satirical, on geography, history, theology and foreign travel. Born into a prosperous family in Burford and educated at Oxford, he lived at Lacies Court in Abingdon from 1653 till shortly before his death in 1662.

In the 1620s and 30s, Heylyn became close to William Laud, chancellor of the university and later Archbishop of Canterbury, strongly supporting his campaigns for strengthening the power and authority of the Church of England and against puritanism. Laud brought him to the notice of Charles I, to whom he appealed by writing a book on the history of the Order of the Garter. He became a chaplain-in-ordinary to the king. Thereafter he was used by the church authorities and by the court as a polemicist, attacking in print those who opposed their policies. He made many enemies. But even those who disagreed with him admitted that his scholarship and research went deeper than those of his opponents.

In the Civil War he joined the king in Oxford and continued in his role as a propagandist, starting the royalist newspaper Mercurius Aulicus. Afterwards, he was heavily fined by the victorious parliamentarians and lost the church living at Alresford, Hants, that had been his home. However, he was able to retain or recover most of his properties and remained a wealthy man. For six years he lived in semi-retirement, managing a family-owned estate at Minster Lovell, but in 1653 he settled in Abingdon. He bought (or leased) Lacies Court from Paule Dayrell whose father he would probably have known from his Oxford days. Abingdon was away from the now hostile atmosphere of Oxford, but still near enough for him to patronise the bookshops and use the Bodleian Library.

He expanded Lacies Court, building on to it a small oratory where he could privately read the liturgy and administer communion in the traditional way while remaining within the law. He made it a centre for local people who shared his religious and political opinions. Apart from the Dayrells, they are known to have included Robert Jennings, the schoolmaster who had lost his position in Reading, the lawyer Charles Tooker who had lost his at the Berkshire archdeaconry, and another lawyer, Christopher Blower, known to have been allied to the largely conservative Mayott clan. To the local puritans, he remained hostile. An anecdote has him exchanging insults with the parliamentary soldier Francis Allen, now a magistrate, on the social status of their respective wives. His was a gentlewoman; Allen’s a tripe-wife.

But there seems to have been some attempt to build bridges with conservatives in the protectorate government. John Lenthall, son of the Speaker of the House of Commons, was nursing Abingdon for a political base, and the Lenthalls, like Heylyn, came from Burford. When the puritans sought to have the church of St Nicolas demolished as a hotbed of conservatism, they joined in campaigning to save it. When there was talk of Oliver Cromwell accepting the crown, Heylyn dedicated books to him and to his son Richard. Heylyn was a royalist, but his loyalty was not to any particular dynasty. His preoccupation was the Church of England in its early, non-puritan, form. His last published works were a series of hard-hitting books on church history, arguing that the Reformation throughout Europe had been subverted by puritan plotting, and presenting the executed Laud as a martyr in the cause of true protestant religion.

With the restoration of the monarchy in 1660, it was widely expected that Heylyn would become a bishop. But he had no record of clandestine activity during the interregnum, his acerbic style was not what the new situation required, and by then he was almost completely blind. He remained sub-dean of Westminster and did finally move there, but died shortly after. He is buried in Westminster Abbey.

Heylyn married in 1628 Laetitia Highgate, who was already his sister-in-law. The marriage was at first clandestine, since he was still a fellow of Magdalen College. There were eleven children, none of whom seem to have achieved anything of note. His wife survived him. 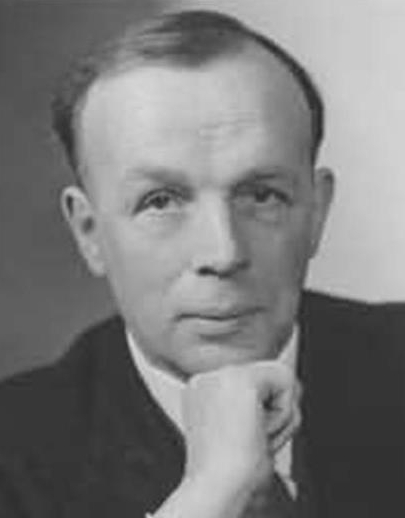 Geoffrey Trease was one of the most prolific authors of his time with no fewer than 113 books and several plays to his name. His work has been translated into twenty languages. He spent a productive part of his life in Abingdon writing some of his best-selling books. (He is sometimes confused with Henry Treece, also a writer of historical novels.)

Trease came to Abingdon in 1936. At that time, he had little money and a barely-established reputation as a writer. He and his wife looked at a house in the Radley Road under construction and made a quick decision to buy. As he later commented, “The Oxford area attracted me, for its general memories were wholly happy.” When the house was completed, they moved in and their daughter, Jocelyn, was borne at the Warren Cottage Hospital. The Treases named their house ‘Green Garth’ after the portion of green field it was situated in. They kept it until 1954. 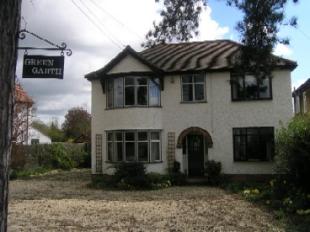 Green Garth, still with its 1930s exterior, when it was up for sale in 2005. It was later modified and extended. (Photo by Hodsons estate agents reproduced by kind permission of Rightmove Group Limited.)

By this stage in his life, Trease had made the decision to specialise in children’s novels, usually historical ones. These included Cue for Treason, Word to Caesar and The Crown of Violet. His non-historical novels included the five-book Black Banner series. He became increasingly well-known for his writing and, in the process, he reshaped the historical novel for children. Firstly, Trease provided stories in which the heroes would challenge the nobility of the day. Secondly, an important aspect of his writing was that he often featured girls as strong, leading characters.

Robert Geoffrey Trease was born in Nottingham, the son of a wine merchant. His upbringing included attempts at writing and frequent visits to the theatre. He won a scholarship to Oxford to read Greats (Classics). However, after just one year, he decided that the academic life was not for him and left. Trease spent some months working with needy families in the East End and also writing when he could. Eventually , shortage of money pointed him towards teaching and he joined the staff at a school where he met, and later married, Marian Boyer. One unusual experience of this time was caused by his first children’s novel, Bows against the Barons being very well-received in Soviet Russia and selling thousands of copies. The royalties could not be exported, so, in 1935, the Treases travelled for five months around Soviet Russia, drawing on the funds.

After a short time, they moved to Abingdon. Trease continued writing and George Orwell said of him in a book review in Tribune “He is that creature we have long been needing, a ‘light’ Left-wing writer, rebellious but human, a sort of P. G. Wodehouse, after a course of Marx.” Trease also followed up two other interests: he was quickly appointed Chairman of the Abingdon Labour Party, with meetings in the Corn Exchange, and he also gained a small acting part with the highly-rated Guild of Abbey Players. He put these contrasting experiences down to the shortage of talent in one sphere and its surplus in the other.

The arrival of the Second World War brought evacuees to Abingdon and the Treases were assigned two teenage girls who stayed for some months. When the girls left, the resulting lack of money again propelled Trease into teaching. He obtained a job through a teaching agency and, leaving his family in Abingdon until they could later join him, went to a small school in Cumbria. In that locality, he continued his love of hill-walking and gained background knowledge for the Black Banner novels. Back in Abingdon, his wife began to feel quite isolated from the local community, some of whom seemed to think that Trease’s absence was explained as detention as some kind of collaborator. As a result, Geoffrey Trease later described their relationship with Abingdon as “bitter-sweet”. The Treases decided to lease out the house and join his family in Nottingham. At this point, in 1942, Trease was conscripted into the Army Education Corps, working initially in England and then in India.

After the War, the family was reunited in Abingdon. Trease recalls passing through Radley Station on his way to being demobbed and throwing a note for his wife out of the moving train onto the platform. The note was safely delivered by someone to his wife at ‘Green Garth’ just two hours later. Now came the productive years in Abingdon. Geoffrey Trease said, “All my life I had had to write.” Whilst sitting in the front room with his typewriter and at some inconvenience to the family, Geoffrey Trease wrote furiously, and in the eight years after the War, he completed eighteen of his best-selling books. In addition to work, Trease recalled walking into Radley, bathing in the river and pony rides for his daughter. He loved the views from their house over the cornfields towards the College at Radley and towards Nuneham Courtenay. The family took as many holidays as they could on the Continent, each trip providing background for more books.

In 1954, the Treases finally left ‘Green Garth’ and moved to Colwall near Malvern. Much later they moved again to Bath where Geoffrey died on 27 January 1998. His obituary was published in The Independent in which it was noted that he had become the Chairman of the Children’s Writer’s Group in 1962, Chairman of the Society of Authors in 1972 and Fellow of the Royal Society of Literature in 1979.