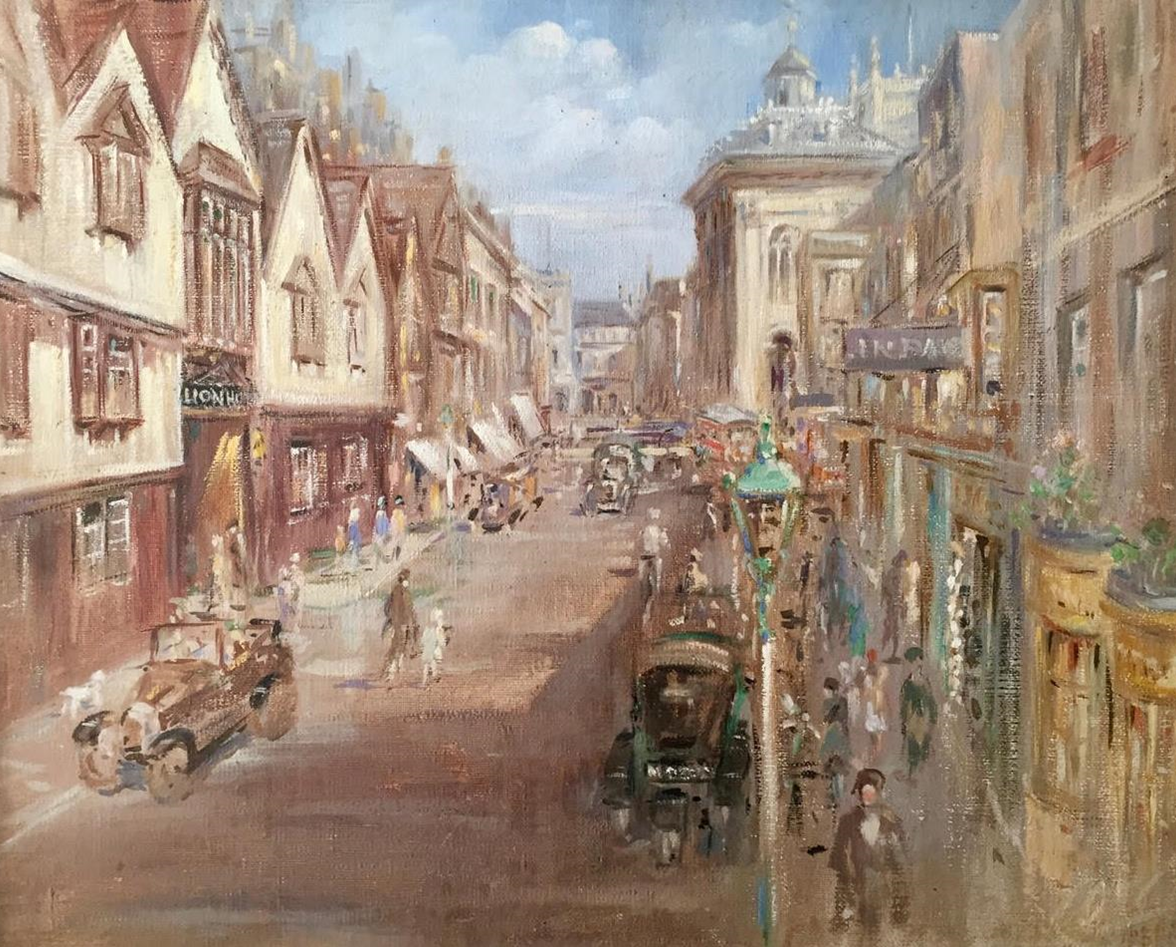 My grandfather, Basil Mayhead, was the last owner of the Lion Hotel on the north side of the High Street before it was sold in 1936 and partly demolished. It had been owned and run by the family since my great-grandparents, William Henry and Alice Mayhead, bought it in 1911 and it was where my father and his sister spent their childhood.

William and Alice Mayhead had been the licensee tenants of a hotel and inn in Reading.  They acquired the Lion Hotel in Abingdon when they had to move because the owners of the Reading building decided to sell it. In a letter William described The Lion as

“…. one of those old-fashioned houses that you see in pictures of the olden days a large wide gateway leading into a yard with racks fitted in the ceiling to keep the joints of meat and bacon on….”.

Tragically, that winter William developed influenza and then pneumonia and he died at The Lion on 24 January 1912, aged fifty‑five.

A few months later my grandfather had given up his career as a surveyor and had moved to The Lion to help Alice to run it. It is through the recorded memories of my aunt, Joan Ballard, that we know something of life at The Lion when she and her brother Bill, my father, were children.

The annual Michaelmas fair was very exciting for them with gypsy caravans and rides coming in and being set up, paraffin flames lighting the booths, the loud pounding noise of the steam engines which ran the big rides, and all the crowds of people.

Life at the hotel was busy. Guests included some travellers and some parents for the various schools in the neighbourhood such as Radley.  Daytime customers included racing drivers from MG and Joan remembered hearing their high-powered cars driving into the yard under the gateway. Monday was market day and was especially busy. Joan and Bill watched the cattle being driven through the town to the market place, and the hotel put on a special lunch for the farmers.

“In the yard of the hotel there was a passageway that went up into the market – so we could get through to the market and on Mondays we used to put on a special lunch for the farmers and the man we called the ostler in the yard used to go and ring a bell at 1 o’clock in the market to tell the farmers that the lunch was ready.  There was quite a big trade going on Mondays and people who came in with their horses and carts used to put their horses in our stabling and their carts in the yard.”

A carrier used the yard of the hotel too.

“Once a week a carrier’s cart used to come in and stand in the yard and if people had any parcels or anything for the villages around they used to bring them in and pay the carrier so much and he used to be in for several hours and used to take all the things around to the villages for them.”

The hotel provided transport to and from the station.

“At one time we used to keep a horse and carriage especially to go to the railway station at Stert Street to fetch people to come to the hotel and we had a Mr Jenkins who used to be the man looking after the horse and he used to go in his livery up to the station and meet people and then we had another man in the yard who was called the ostler and there was a bell in the gateway that you rang if you wanted him or you arrived with your horse and carriage and wanted it taken down to the stables, you rang the bell and he came up.

“Then he was the one who had a large barrow and used to go up to the station behind the horse and carriage to collect the luggage and bring it back to the hotel.”

After leaving boarding school in Thame, Joan worked in the hotel for five years to help her parents and in order to learn the hotel trade. She left at the age of twenty-two when she married Teddy Ballard.  Referring to the staff that worked in the hotel, Joan said that the girls who worked there were lovely girls and some were quite young.  Her mother was very strict with them because she felt responsible for them as they lived in.

My grandparents sold the Lion in 1936 to the F. W. Woolworth Company. Tragically for Abingdon, the part of the building with five gables to the west of and including the vehicular entrance was demolished in the latter part of the 1930s to make way for the construction of the chemists Timothy White and the Woolworth’s store. The offices for Pearl Assurance were on the first floor.