Arthur Preston was a prosperous chartered accountant who lived in Abingdon for most of his life. He served the Borough Council as its accountant for twenty-two years and as mayor for three years, and represented Abingdon on the Berkshire County Council where he was chairman of the Finance Committee. He served eleven terms as a governor of the Christ’s Hospital charity, and was also a governor of Abingdon School.

He was fascinated by local history, building up a large collection of documents and employing assistants to transcribe and translate documents held elsewhere.  He is well known as the author of a major publication on the history of St Nicholas’ Church, Abingdon School, and Fitzharris Manor, written in conjunction with Agnes Baker, his historical secretary.

In 1922, he financed a major archaeological project to establish the position and dimensions of the old Abbey church (demolished in 1538), which is now marked out in the Abbey Gardens. In 1935, he paid for a major restoration of the painted ceiling in the Lady Chapel at St Helen’s.

This sense of historical continuity shows also in his achievements as a local politician and administrator. His primary concern, given his experience as an accountant, was always in financial matters, but he was largely responsible for a refurbishment of the Guildhall, and he himself paid for that of the Roysse Room. It was at his initiative that the Council acquired the Old Abbey House and its grounds. He had a detailed inventory made of the Council’s plate, pictures and muniments, and added to them from his own collection.

In the Council, Preston developed a reputation as a powerful debater who usually got his way in controversial issues. Much of the present state of Abingdon and its well-preserved heritage shows the effect of his influence and his concern for historical continuity.

Preston married Lydia Jacobs of Burford in 1895 and they lived at Whitefield in Park Crescent. She died in 1943. They had no children, but supported his nieces and nephews with generosity.

Arthur Edwin Preston, local politician, historian, and benefactor, was one of four children of John and Frances Preston, who lived at 13 High Street, Abingdon.  He was educated at Abingdon School, and gained a BA degree at the University of London in 1875. He lived in Abingdon all his life, except for a brief spell in London as a young man.

Preston assisted in his father’s accountancy practice for ten years, and then set up his own practice in Oxford and London. In 1880, at the age of 28, he was one of the foundation members of the Institute of Chartered Accountants.  Accountancy was then still dominated by lawyers, so he trained as a barrister, and was called to the Bar at Gray’s Inn in 1887. He kept chambers in the Temple, although he was too busy with accountancy to pursue a career at the Bar.

He retired from accountancy in 1908.  The practice was handed over to his Chief Clerk, Mr J H Wenn, and still continues a century later as Wenn Townsend, with offices in Abingdon and Oxford.

In retirement Preston turned his energies to the service of his native town and its institutions. At this time, he had already been accountant to the Borough of Abingdon for over twenty years and an elected member of the Berkshire County Council since 1895 (Abingdon was in Berkshire, not Oxfordshire, until the reorganisation of 1974).  He was chosen unanimously as Mayor of Abingdon for three years from 1909, the only occasions on which the Borough broke with tradition and chose a mayor from outside the elected members of the Council. He would secure election to the Council in 1912, and become an alderman of the Borough in 1923. He initiated a major programme of refurbishment of the Guildhall buildings, and a detailed inventory was compiled of the plate, pictures, prints and muniments belonging to the Corporation. Many of the paintings and engravings on display today in the Guildhall came from his private collection. In 1911 he restored at his own expense the Roysse Room, the former schoolroom where both he and his father had been educated.

As a member of Berkshire County Council and chairman of its Finance Committee, Preston put the county’s finances on a sound footing which became a model for other counties.  He was noted as an extremely lucid speaker on the intricacies of financial accounts.

For many years he was a Justice of the Peace of both county and borough. He was a governor of Christ’s Hospital, the long-established charity at Abingdon, from 1906 until his death, and was its master no fewer than eleven times. He was a Berkshire representative on the Thames Conservancy for over twenty years.  He was a governor of Abingdon School from 1903, and chairman of the governors at a time when the school was expanding rapidly.

Preston developed a keen interest in the history of Abingdon, and in old manuscripts.  He built up one of the finest private collections of documents in the country.  This included many Borough records which had been discarded in 1865 and rescued by his father, John Preston.  His research work, continued over many years with the help of a number of able assistants, was thorough and wide-ranging. It covered the history of Abingdon and more generally of its surrounding region, even as far away as Reading. Unfortunately, only a fraction of this work was ever published.[1] His working papers, deposited with the Berkshire Record Office, form a large archive and remain a valuable resource for later generations of local historians. He was a Fellow of the Royal Historical Society and a Fellow of the Society of Antiquaries.

Preston was responsible for, and met the costs of, the excavation of the site of the Abbey church in 1922-3.[2] In 1935 he restored the painted roof of the Lady Chapel of St Helen’s Church, again at his own expense and leaving a legacy for its perpetual upkeep.[3]

In his youth Preston was an enthusiastic swimmer. He was a member of The Ancient Society of College Youths, a bell-ringing society. He was a Mason, and in 1893 he was master of the Abbey Masonic Lodge, Abingdon. He played a good game of golf, and was one of the three co-founders of the Frilford Heath Golf Club, taking a particular interest in the layout of the course.  He was a founder of the Abingdon Bowling Club in 1921, and remained its president until his death.   He was a keen horticulturalist, and an orchid grower of some repute.

He married Lydia Jacobs of Burford in 1895 and they set up home at Whitefield in Park Crescent, Abingdon, which became a centre for a wide circle of friends. There were no children of the marriage, but something of a family relationship developed between the Prestons and Agnes Baker (1897-1955) who was employed from the early 1920s as Arthur’s ‘historical secretary’.

Arthur Preston died on 21st May 1942 at Whitefield, in his 90th year, and his wife Lydia died on 19th April 1943.  Their memorial tablet in St Nicolas church describes him as a ‘genial host, generous kinsman and unfailing friend who served his native town and county in devotion and integrity’.

Preston stands firmly in a tradition that regarded personal ability and personal wealth as carrying a duty of public service in politics and administration. In this his career resembles to a remarkable extent that of his Abingdon predecessor Francis Little (died 1638), extensively researched both by himself and Agnes Baker.[4] Like Little in his time, Preston was concerned to maintain historical continuity, to renew rather than replace. Like Little, he studied local history, applied his own money to civic purposes, and participated enthusiastically and usually with success in local political controversies. The present-day uses of the Guildhall, of Old Abbey House and the Abbey Gardens, and the continued functioning of the charity of Christ’s Hospital, are all part of the legacy of Preston’s activities and periods in office, and they all developed in accord with his own principles. Abingdon today would be a very different town if he had not acted as he did.

Statements not specifically referenced are from the following sources:

A E B  Foxwell, ‘St Nicholas, Abingdon and other papers by Arthur Edwin Preston.  A portrait of the author’,.  Unpublished typescript, 1997.

[1] His main published work was A E Preston, St Nicholas Abingdon and other papers (Oxford, 1929). 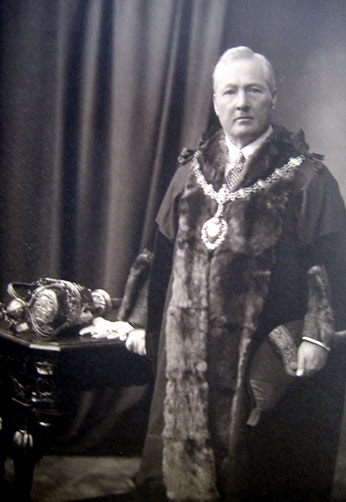 By kind permission of the Abingdon Town Council