John Francis Spenlove, Abingdon brewer and politician, was born on 27 March 1769 in Cornhill, London, the son of Francis Spenlove and his wife Dorothy. Francis was a mercer, a freeman of the City of London, and a member of the Wheelwrights Company. His son John was apprenticed at the age of fifteen to William Whittingstall, brewer, of Great Amwell, Hertfordshire. By 1790, at the age of twenty-one, he was at the Abbey Brewery, Abingdon, in partnership with Edward Child. Child died in 1815 and Spenlove continued as sole proprietor or with other partners.

The Abbey Brewery site was leased from the Trustees of Mayott’s Charity. The lease covered the Long Gallery and the Checker, a row of buildings running parallel to them to the north, and various miscellaneous buildings and yards between the Long Gallery and Abbey Close. The brewhouse was outside the leased site; it was situated across Brewhouse Yard, opposite the east end of the Long Gallery. The leased site was used for storage, stabling and offices.  The Spenlove residence was just outside the site, at what is now known as the Cosener’s House. 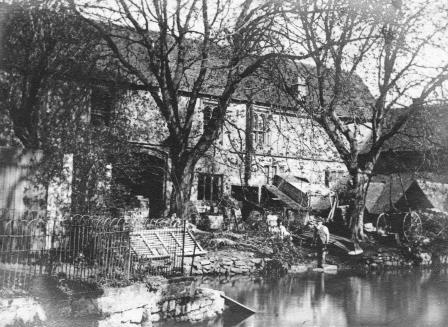 Spenlove was both a brewer and a maltster. Surviving records show that he took his malt from nine local malthouses, some of which he owned while others were leased. His barley was also locally grown, at the most fourteen miles from Abingdon. The records suggest that he supplied beer to as many as forty public houses.

In his politics, Spenlove was an ardent supporter of the town’s long-serving Whig MP John Maberly and became involved in some questionable manoeuvres. At the mayoral election of 1826 he topped the poll but saw the mayoralty go to his Tory opponent after complaints on how the votes had been counted. The affair was widely publicised.

In September 1796 Spenlove married Susanna (or Sukey) Morland, daughter of William Morland of West Ilsley in Berkshire. William’s father Benjamin had founded the Morland brewery in that village earlier in the eighteenth century. The marriage, whatever its personal aspects, had financial significance; the bride brought a capital sum of £5000 to the business. She also provided a useful connection with her brother Benjamin, a lawyer with an expanding Abingdon practice. .All brewing in Abingdon would eventually come to be controlled by descendants of the younger Benjamin Morland.

John and Susanna had three children: a son who predeceased his parents, and two daughters, Mary and Anne. Susanna died in 1830, and John himself on 2 January 1841

Spenlove had been a wealthy man. He left cash legacies of £4950 to each of his daughters, and one of £2000 to Christ’s Hospital which was to be invested and the proceeds used to provide coal for the poor of the local parishes and for those of Hoddesdon in Hertfordshire near where he had started his brewing career. In a codicil to his will, Spenlove placed his brewery in the hands of three trustees: his business partner John Moses Carter, his nephew George Bowes Morland, a son of Benjamin, and Edward Tull, a prominent sheep farmer and JP living at Peasemore, close to West Ilsley. Mary, the elder daughter, purchased the brewery from the trustees and operated it together with Carter. She died unmarried in 1862, and under the terms of her will George Bowes Morland was allowed to purchase her property, including the Abbey Brewery, at a twenty-five per cent discount. After litigation, the public houses tied to the brewery were included in the transaction. The brewery then passed to George Bowes’ brother, Edward Henry Morland, who already owned the Eagle Brewery in Ock Street. The Abbey Brewery would continue until 1895, when operations were transferred to the Ock Street site. The two remaining breweries in Abingdon would both thereafter fall into Morland hands: Saxby’s Stert Street Brewery in 1889, and the Tower Steam Brewery at the western end of Ock Street in 1928.

This is an abridged version of the article by Bill Mellor first published in Aspects of Abingdon’s Past (St Nicolas Church, Abingdon, September 2004)   In the Middle Ages, ale […]