For most of the first half of the twentieth century, Abingdon’s water supply relied on two gas engines and a pump situated in the basement of the County Hall, now Abingdon County Hall Museum.

For most of the first half of the twentieth century, Abingdon’s water supply relied on two gas engines and a pump situated in the basement of the County Hall, now Abingdon County Hall Museum.

At the beginning of the century, Abingdon’s water supply came mainly from wells and springs all over the town. From about 1890, summer rainfall decreased and water shortages occurred as the wells dried up. This shortage also affected firefighting efficiency; although firefighting equipment was getting more sophisticated, adequate water to put out fires was often lacking. Although Abingdon’s waterworks opened at Wootton in 1878 to increase the supply of clean water to the town, the new houses being built along the Oxford and Radley roads, as well as the increase in the addition of baths and flushing toilets and the closure of contaminated wells, meant that ever more water was needed to satisfy the demand.

In 1901, Abingdon’s town council decided that a supplemental water supply was required to cover shortages, and to use the water from the artesian well on The Square for this purpose. However, the flow there in itself was of insufficient pressure to do what was needed and, in order to increase the pressure in the mains, the water was drawn under the High Street to the County Hall, where a Crossley gas engine was installed in the basement of the building to power a J Tylor & Sons pump, installed at the same time.

The safe operation of the engine and pump required an adequate back pressure to be assured even in the event of a leak from the mains. This was provided by a vertical pipe fixed to an outside wall that reached to above the parapet of the building and then turned downwards through a U-bend to connect to the mains. Pumping was carried out as required, a flow gauge providing information as to whether the mains pressure was adequate or not at any given time. The arrangement was so successful and, it was felt, so necessary that in 1906 two new Crossley gas engines were ordered so that, if one engine required maintenance or repair, power could still be supplied by the other. 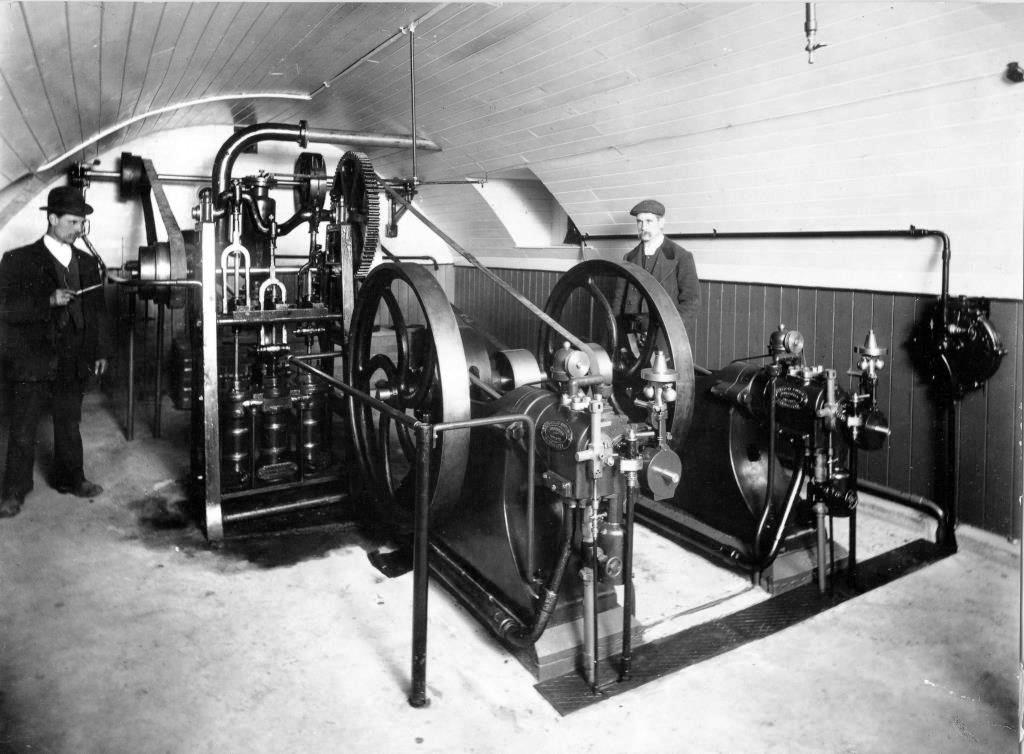 The newly-installed pair of horizontal gas engines in 1907 with the triple-barrelled pump to the left.(With thanks to the Abingdon County Hall Museum)

Although the engines were very efficient and performed better and more cheaply than expected, the confined space in which they were housed made for difficult working conditions. The engine drivers, as they were known then, complained of being overcome by heat and fumes when the engines were in use and sometimes had to be carried out for resuscitation.

The engines and pump were last used in 1947. At that point, the well in The Square was fitted with an electric pump and the water went straight from there under pressure into the mains. Then a ring main was laid around Abingdon by the Oxford Water Company and finally Thames Water became the supplier.

Today, after the refurbishment of the County Hall in 2012, the gas engines and the pump are part of the Museum’s displays; to save space, the left and right engines have been transposed, and some of the piping has been shortened. One engine has been adapted to rotate slowly for display purposes using an electric motor but the other is in its original state, having only been cleaned. The whole installation is believed to be unique in that all the components are together in their original location with an unconverted engine. 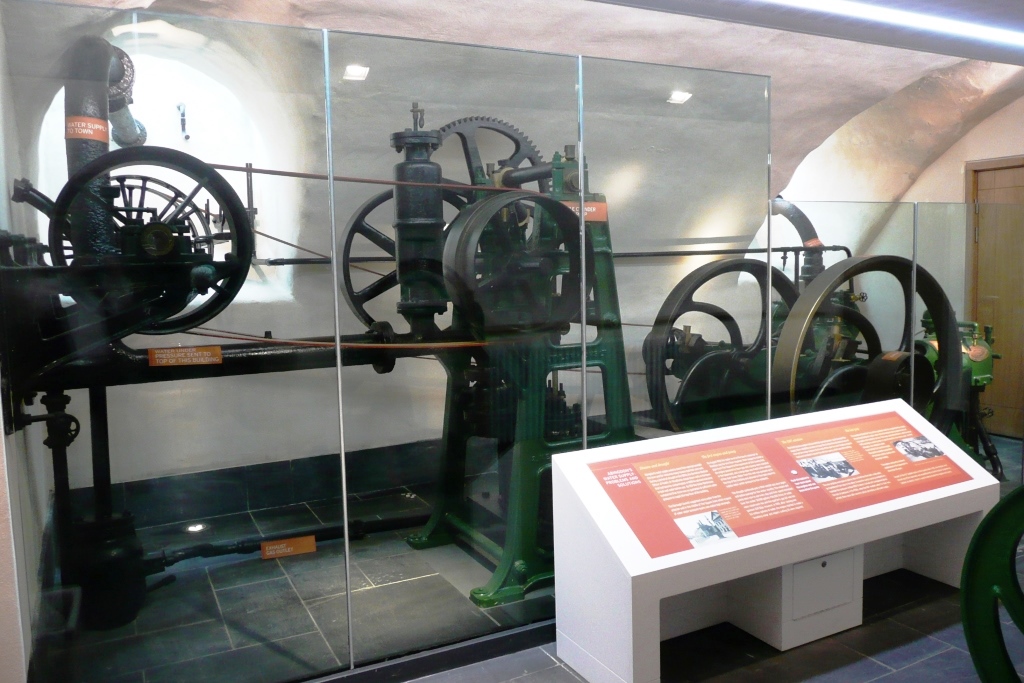 The installation as displayed in 2012 in the same location. The engines have been transposed and some of the piping shortened, but the pump and the water inlet are in their exact original places.(Ruth Weinberg 2012)

At the time of their installation, before electricity became widely available, power requirements were often met by gas or oil internal combustion engines; there were Crossley gas engines elsewhere in Abingdon: in the Old Gaol, then home to a corn milling business, one was used for milling and other purposes; at Ballards Foundry (Phoenix Works) in Bath Street one powered the furnace blower; at Cottrell’s butchers one powered the refrigerators, and one at the carpet factory powered a carpet beating machine. The Workhouse had at least one Crossley gas engine to pump all the water required for the boilers, laundry and closets in the building. Gradually, as electrification took place all over the town and, indeed the whole country, these other engines fell out of use and were eventually disposed of.
RELATED RESOURCES
George Winship
Abingdon’s Water Supply
County Hall

This “exceedingly handsome” building – as John Betjeman described it – was erected between 1678 and 1683, primarily to house the Berkshire Assizes when they were held in Abingdon. Until the […]

To get a rough equivalent in today’s values of the costs mentioned in this article, use http://www.nationalarchives.gov.uk/currency-converter/#currency-result An adequate and pure water supply is probably the basis for every human […]

George Winship was Abingdon’s Inspector of Nuisances and Borough Surveyor for forty-one years and brought Abingdon into the twentieth century. Much of what he did is still with us today. […]