Standing on the steps of the County Hall looking towards St Nicholas’s Church today, it is easy to imagine that the grand balustraded stone staircase on the Bridge Street corner of the Abbey Gateway that leads up to a hefty door on the first floor of the Guildhall has always been there. But if you had been in the same place in the middle of the nineteenth century, you would have been looking into the windows of Richard Parsons’ renowned double-fronted bookshop, stationer’s, printer’s and circulating library which dominated the corner of the street for thirty years between 1835 and 1865.

Richard Parsons was not from Abingdon.  He was a west countryman, born in the parish of Walcot, Bath in 1804 and baptised at St Swithin’s Church in May 1804, in the heart of the elegant ‘Upper Town’. St Swithin’s was where the rich and famous worshipped. Jane Austen’s family were parishioners and Jane’s father was buried in the churchyard in 1805.

Richard was the only son of Richard Parsons Snr (1757-1833) and Elizabeth Habgood (1766-1813), who married in St Swithin’s on 19 June 1799. Richard and Elizabeth also had at least three daughters, two of whom were surviving at the time of their father’s death. Theirs appears to have been a rising middle-class family of some standing, owning several properties in Bath.

On 17 July 1824 Richard Jnr married Jane Prisca Webber at St James’s, Bath (Jane’s family’s parish church).  Jane was also born in Bath, about 1806/7. No evidence has been found that the couple had children.

Young Richard began his working life as an employee of Bull’s, a library established in the 1700s, well-known and much frequented by Bath’s literati. Later he transferred his services to William Meyler, at the Grand Pump Room Library. Meyler was a significant local figure, publisher of the Bath Herald newspaper.

In October 1830, 25-year-old Richard branched out by himself and purchased an established “bookseller, stationer, printer and binder, and circulating library” in Duke Street, Reading. This may have been an opportunity identified by his paternal uncle William Parsons. William owned the substantial Angel Inn at 116 Broad Street, just a couple of minutes’ walk from Duke Street. By 1830, Richard would have been an experienced bookseller and librarian with excellent contacts from his time with Messrs Bull and Meyler.

In late February 1833, Richard’s father died.  Richard, described in his father’s will as “bookseller and printer and stationer at Reading in Berkshire”, was left the family home at 3 Burlington Place in Bath, together with “all plate and ready money”. It can only be speculated that having wound up his father’s estate, he sold the house and had sufficient funds to move his business to Abingdon, where the printing and stationery trade was not as well developed as in Reading. 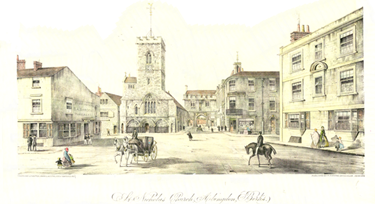 A print published by Parsons in 1857 showing his shop at 1 Bridge Street. (Image courtesy of John Foreman.) 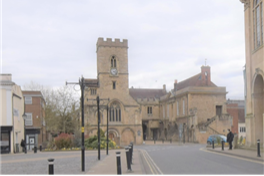 The same scene in 2021, with the Guildhall stairs on the site of the shop. (Image courtesy of Michael Harrison.)

His obituary much later would describe Richard Parsons as “retiring and unobtrusive” and having “a limited circle of friends” and so it is not surprising that he does not seem to have achieved the personal prominence in Abingdon that his extensive business might have justified. But he was obviously known and trusted. In 1844 a difficult situation arose when one of the town’s two assessors, Thomas Frankum, having been re-elected to the position he had held for many years, refused to take it up. The assessors were legally responsible for the correctness of the lists of people qualified to vote and for checking the validity of votes cast in municipal elections. Their role had become controversial in recent years, with in at least one instance attorneys appearing before them to argue the case of frustrated would-be voters, and it may be that Frankum, as a local solicitor, felt unable to continue. The second assessor was Caleb Evans, another printer and stationer with premises in the Market Place, who must have had business relations with Richard. It was no doubt through his influence that Richard was elected to the vacancy, and would be re-elected annually until the 1860s. There is no record of any controversy during his period in office.

The 1861 census still records Richard (57, a bookseller) and Jane (50) at 1 Bridge Street, Abingdon. They have one general servant and a lodger. But in May 1863 Richard gave up and retired home to Bath. The shop was sold to a John Davis who carried on Richard’s business; by the 1880s it was Harker’s Reading Room and in 1890 became a coffee tavern. The building was demolished in 1937 as part of a road widening scheme.

By 1866, the Bath Directories show “Richard Parsons, Gentleman” renting rooms at 3 Cottage Crescent on the southern outskirts of the city. This was a row of houses known today as Bloomfield Crescent. By 1871 Richard and Jane had moved into town and were renting two unfurnished rooms at 6 Walcot Terrace, Bath, where they remained for the rest of their lives. In the 1871 census he is listed as “retired bookseller” aged 66. Jane died in 1880. She had been the mainstay of Richard’s life and her death “depressed him more than his growing weight of years”.

On Sunday 19 July 1891 Richard died at 6 Walcot Terrace, Bath, aged 86 and was buried in Locksbrook cemetery two days later. The Bath Burial Index confirms he was interred in the same plot as Jane and gives his age as 87 and his profession as bookseller.  His obituary in the Bath Chronicle makes much of this “retiring, unobtrusive” man’s “sincerity and amiability”, commenting that his “well-stocked memory made him a delightful companion”. 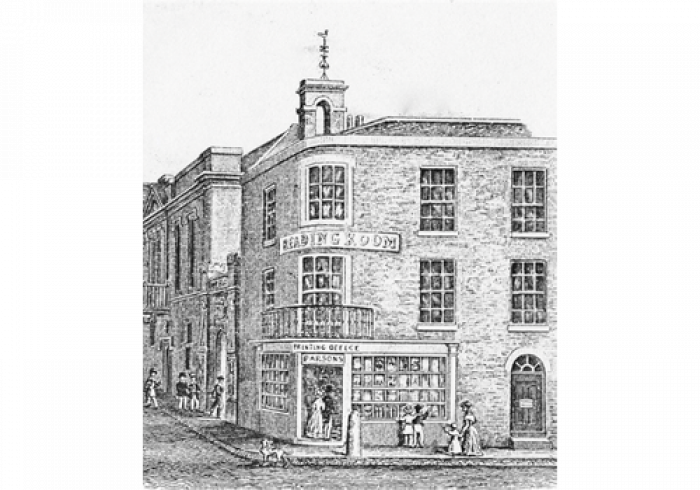 Richard Parsons’ bookshop and reading room at 1 Bridge Street before about 1852.