Nathaniel Dodson, who was vicar of St Helen’s for over forty years, was born in 1787 into a clerical family based in Sussex. His father and grandfather had been clergymen, and so were two of his brothers while the third became a leading canon lawyer. He entered St John’s College, Oxford, in 1805, took his BA degree with second-class honours in 1810 and was ordained a year later. After taking his MA in 1814 he became domestic chaplain to the first Earl of Sheffield, a middle-ranking politician also based in Sussex, and tutor to his son. He accompanied the young man on a three-year continental tour.

It was possibly through the earl that he came to the notice of Lord Liverpool, the prime minister, who in 1824 made him vicar of St Helen’s and rector of St Nicolas’ in Abingdon, which were then under the patronage of the Crown. According to biographical notes made much later by his daughter Emma, he was to become Dean of Chichester at the next vacancy and accepted Abingdon only reluctantly as a stopgap; but by the time the Chichester vacancy arose Liverpool was dying and had resigned the premiership.

Dodson’s local responsibilities extended to the hamlets of Drayton, Shippon, Dry Sandford, Radley and Northcourt. He proved active and hard-working. He took great care of his parishioners and gained the special respect of the poor among them. He had had some medical training and saved them doctors’ bills by treating them himself and lawyer’s fees by helping them write their wills.

He was a great builder. In the late 1840s he started a public appeal for the building of new churches at Dry Sandford and Shippon. Another appeal in 1860 resulted in the church of St Michael’s being established in Park Road; Dodson himself contributed £100 towards the £2500 budget. St Mary Magdalene at Shippon and St Michael’s were designed by George Gilbert Scott, architect of, among much else, the Albert Memorial and the St Pancras Hotel. The Reading-based architect, J B Clacy, was responsible for St Helen’s at Dry Sandford. In addition to St Helen’s, Abingdon, D0dson held the rectory of Buttermere, a small parish near Hungerford where he had to employ a curate, and must have been involved in rebuilding the dilapidated church there in the 1850s to a design by the ecclesiastical architect, Robert Jewell Withers.

When under the Poor Law of 1834 Abingdon was made the centre of a union , Dodson became chairman of the Board of Guardians that managed the new workhouse. Before accepting the position, he insisted that some of the harsher provisions of the new law should not apply: paupers would continue to get free medical attention, and married couples over sixty years of age or when one of them was infirm would not be separated. The post was subject to annual re-election, but he continued to hold it almost until his death.

His activities as a magistrate were mostly routine, but occasionally controversial. In 1845 he was viciously attacked in the satirical magazine Punch for an allegedly vindictive sentence on a poacher. Punch had got its facts wrong, and had to apologise. In 1844, as a magistrate responsible for oversight at the Abingdon gaol, he investigated and ended serious fraud and malpractice going on there. It had been an impressive piece of detective work, using one of the prisoners as a spy. At the same time, he questioned the inhumane ‘separate system’ in use at the newly opened Reading gaol, where convicts were denied any human contact except with warders and the chaplain. He was fearful that the Abingdon prisoners would eventually be transferred there, as indeed happened after his death.

When Dodson came to Abingdon, there was no vicarage. The banker William Bowles was mayor at the time, and there may have been some agreement between them.  Bowles built a large house on land he leased at Lacies Court on what is now Bath Street, and in 1832 sold it to Dodson at half its cost as an official residence

Much later, when Albert Park was laid out in the 1860s, an acre of freehold ground at the top of the crescent was granted for a vicarage. Dodson started building a large house, now No 17 Park Crescent and sub-divided, but unfortunately he died before it was ready. It was his successor, Alfred Pott, who was the first occupant.

Dodson married in 1829 Mary Ann Wapshare, daughter of the rector of East Hendred. She died in 1833, leaving him with three infant daughters. In his last years, Dodson became disabled and blind and had to employ curates to carry out his duties. Nonetheless, when he died in August 1867, the town went into formal mourning. Shops were shut and the bells of all the churches rang continuously. He was to be buried with his wife at East Hendred, and as the funeral procession left Abingdon the mayor and corporation stood bare-headed at the town boundary on Drayton Road. 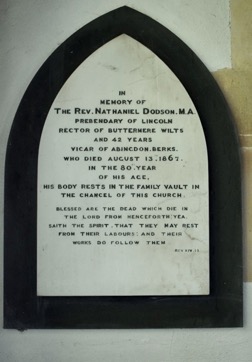 Of his daughters, the oldest, Frances, remained unmarried, keeping a large house in Spring Road until she died in 1919 at the age of eighty-nine. Mary and Emma both maintained the family tradition by marrying clergymen. In spite of the very moderate income from St Helen’s and heavy expenditures on his churches, on curates, and on charity, Dodson was able to leave his children well provided for.

St Michael’s was built in 1864-7 on Park Road, just south of the newly created Albert Park. Christ’s Hospital, the main town charity which owned what was then an open […] 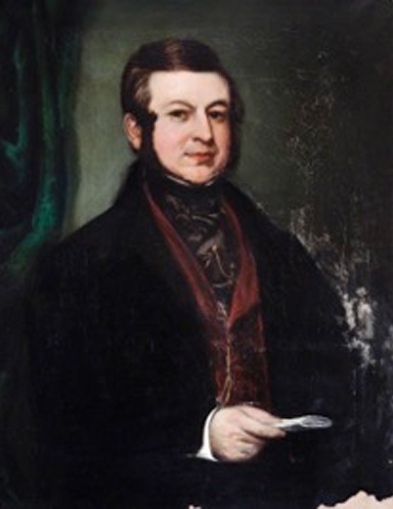 Gentleman holding a letter. Believed to be Nathaniel Dodson as a young man. By John Bridges (active (1818-1854).

Gentleman holding a letter. Believed to be Nathaniel Dodson as a young man. By John Bridges (active (1818-1854). Courtesy of Abingdon Town Council

Portrait of a clergyman believed to be Nathaniel Dodson in old age. Photographer unknown. Courtesy of Saint Helen's Archive

Trade or Profession: Minister of Religion