John Thomas Norris was Abingdon’s MP from 1857 until 1865. He was particularly helpful to the town in opposing the threatened closure of the Old Gaol, although this did take place after his time.

Norris was born in Bledloe, Bucks, in or about 1809, son of Edmund Norris. By 1834, Edmund had an interest in the paper mill at Sutton Courtenay. In 1839, father and son were jointly leasing it at £3120 per year, and in 1853, after Edmund’s death, John Thomas is described as the owner. But from the 1830s John Thomas was based primarily in London, acquiring or setting up a printing and stationery business in Aldersgate which provided an outlet for the products of the mill.

It was a time when political passions were strong, and a number of organisations were beginning to come together to form what would later be the Liberal party. Daniel O’Connor, the campaigner for Irish emancipation, was recruiting prominent Londoners into his association, and in 1837 Norris was deemed important enough to be one of them.  In 1840, he stood successfully for Aldersgate in the elections for the London Common Council, in spite of being challenged on the grounds that he was not resident in the ward. In 1851 and again in 1852 he was nominated for the position of Sheriff of London, a stepping-stone to becoming Lord Mayor, but was not elected. His main activity as a London politician was in the campaign to remove the livestock market from Smithfield, which was achieved in 1855.

Norris seems to have divided his time between London and Sutton Courtenay. In London, he had an establishment near Russell Square, with servants and a coachman. In Sutton Courtenay, his residence was the Mill House. He made himself popular in the village when, in 1850, he addressed a meeting of protest against an offensive article that someone had written in the Morning Chronicle describing the inhabitants as unusually depraved, drinking, living together before marriage, and playing quoits on Sundays. He was also making himself known in Abingdon.

The Liberal MP for Abingdon, General Caulfield, died in 1852 soon after being elected. Norris offered himself for the seat, but had to withdraw when a local magnate, Lord Norreys, having switched from the Conservatives, decided to stand. There was an understanding that Norris would have the nomination when next the seat became vacant, and this duly happened two years later when Norreys succeeded his father as Earl of Abingdon and moved to the House of Lords.

Unfortunately another candidate appeared, an obscure young man totally unknown in Abingdon, Haythorne Reed. Norris had, it seems, somehow offended a few important people in Abingdon and was not considered by some to be of high enough social status for the honour of representing the town. George Bowes Morland suggested with sarcasm that his failure to attain the London shrievalty disqualified him from standing for parliament in Abingdon. Reed, as an ex-junior officer of the 17th Lancers, trumped the wealthy stationer.  Norris and his supporters remained optimistic but, in a poll that featured ‘strong beer’, violence and highly credible accusations of bribery, Reed won by 125 votes to 117.

However, at the next election in 1857 Reed decided to go elsewhere. He tried his luck at Finsbury in London, failed, and was bankrupted by his expenditures. Norris walked over in Abingdon.  There were celebrations in Sutton Courtenay with bell-ringing, and music and dancing on the green till late.

Norris was a moderately active MP, generally following the Liberal line. The one notable exception was in a debate on a trade treaty with France in 1860 when he argued at length that, however desirable free trade might be in principle, there should still be a protective tariff on imported paper. For Abingdon, he was a great asset in the struggle against the closure of the Old Gaol. He repeatedly lobbied successive Home Secretaries and wrote an impressive paper setting out the town’s case. As a JP in Sutton Courtenay, he could attend the county Quarter Sessions, where magistrates from the south of Berkshire were campaigning for closure on grounds of economy.

At the same time, Norris kept up his business career. The Aldersgate print works must have been a sizable operation; in 1856 eighty of its employees were treated to a two-day holiday jaunt to Sutton Courtenay and Abingdon at Norris’s expense. He invested in railways, becoming an active shareholder of the GWR and a director of the Eastern Counties Railway.

But in 1865 his world collapsed. In the election of July of that year, he was defeated by the Conservative Charles Lindsay. Then the manager at Aldersgate died and the plant’s finances were found to be in serious deficit. In November, Norris was made bankrupt and his public activities were at an end.

Norris retired to Sutton Courtenay, where the mill was put on sale in 1866. Nonetheless, he still seems to have been running it and claiming to be its owner in 1869 when there was an explosion that killed a workman. He died in 1870. The mill was advertised for lease in 1881, but there were no takers and it was closed in that year.

Norris is buried in Sutton Courtenay. He married in 1840 Emily Francis Choppin; she died in 1854 at the age of 32, and in 1858 he married a young widow Selina Victoria von Dadelszen, née McKenzie. There were no children from either marriage.

John Maberly, Abingdon’s MP from 1818 to 1832, was an entrepreneur and a businessman before he became a politician. Born in London in 1770, he started working with his father […]

Although he came to play a significant role in many aspects of Abingdon life, John Creemer Clarke was not a native of the town. He came from Devon and remained […] 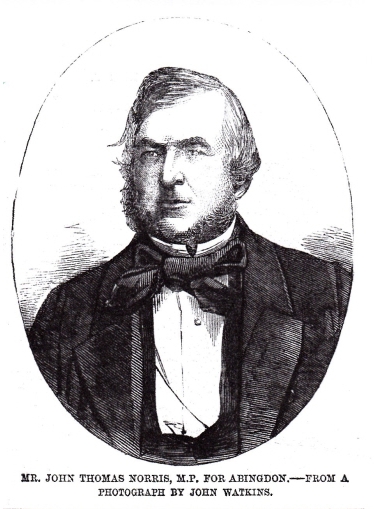