The late eighteenth century was a period when prisons and prison building were prominent in public debate. Criminals could no longer be transported to America, and existing gaols were understood to be inhumane and unsatisfactory. The Berkshire magistrates, who, in their Quarter Sessions, governed the county before the coming of county councils, built a new gaol in Reading, but delayed for some twenty years before replacing the old facilities in Abingdon.

The initiative seems to have come from an Abingdon lawyer, Benjamin Morland, who was a secondary burgess in the Abingdon Corporation and also clerk to the Quarter Sessions. He had a financial interest, together with some of his clients, in the dilapidated White Hart inn at the entrance to Abingdon Bridge. An agreement was reached in 1803 between the Corporation and the magistrates that the latter would acquire the White Hart for £500, buy out the leaseholders for a further £800, and build a new gaol while also widening and paving the road outside. It was Morland, as their clerk and executive officer, who organised the construction, drawing the work out over many years as money became available. 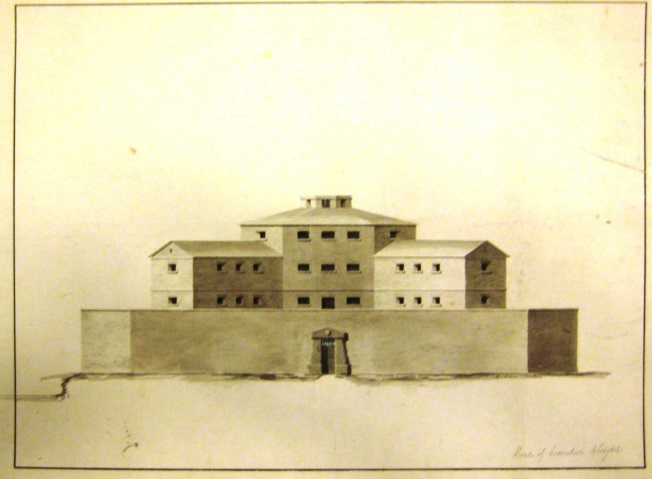 The Old Gaol – Architect’s drawing, 1804Reproduced by permission of the Berkshire Record Office

Architects’ drawings were approved in 1804. They are not signed, but an early description names the architect as the multi-skilled Daniel Harris, who was also a general building contractor as well as governor of the gaol in Oxford.  Harris was the foremost of several contractors that Morland employed. A better-known architect, Jeffrey Wyatt, had some involvement, but this was only in 1812 when the first stage of building was complete and Harris was temporarily incapacitated by mental illness.

There is a persistent tradition that the gaol was built by French prisoners of war, but this is not correct. Apart from officers on parole, there were no French prisoners closer to Abingdon than Portsmouth or Bristol, and they were never employed outside their quarters. What is much more likely, although there is no direct evidence, is that Harris used his own prisoners from the Oxford gaol, as he certainly did in building Osney lock on the Thames in 1787 and probably at the Pinkhill and Godstow locks also. 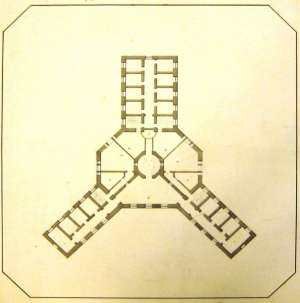 The radial design of the gaol was modern for its time, allowing the segregation of different classes of prisoners. At ground floor level, the angle between the front wings was taken up by a large court room, so that prisoners would not need to be escorted through the streets to and from their trials. But as time passed, opinion moved towards what became known as the separate system, where prisoners were kept rigorously apart from each other and had no human contact except with the prison chaplain and staff. The magistrates built a large new facility in Reading designed for these conditions. It was operating by 1844, and was amply big enough for all the county’s needs.

There followed a political conflict that split the Quarter Sessions for many years. A pressure group was led by William Merry, a fanatical believer in the principle of segregation, and by Henry Court, who was appalled by the waste of money represented by having two separate facilities in the county, both grossly underused. They were supported by the magistrates from the southern and eastern parts of the county for whom having to travel to Abingdon for sessions was an imposition. Abingdon wanted to keep the gaol for the money brought into the town by the sessions and assizes that would cease to be held there if it were to close. But towns were not represented in the county Quarter Sessions, and Abingdon’s case had to be made indirectly by lobbying.

By the 1860s, the government’s prison inspectorate was reporting that the Abingdon gaol was unfit for purpose. Cells now needed heating and artificial ventilation, which could not be retrofitted. Abingdon businessmen were defiant.  In 1867 “one hundred of the inhabitants” of Abingdon passed a resolution to “resist the aggression of the County in their attempt to procure the abolition of Abingdon Gaol.” The Abingdon council went expensively to court, citing the 1803 agreement in an attempt to force the magistrates to rebuild the gaol to the latest standards. Their case was hopeless, and the gaol was finally closed in 1868.

The Abingdon gaol had been in its time a prestige building, but no one had ever considered it beautiful. Its ugliness had been cited against it in at least one of the Quarter Sessions debates. But demolition would cost money, which no one seems to have seriously considered spending. For many years it functioned as a grain store. Some of its subsidiary buildings had become slum dwellings and were demolished in the 1930s. During the 1970s it was partially rebuilt as a leisure centre.  At the time of writing (2016) it is at the centre of a large residential development and has been converted into flats. 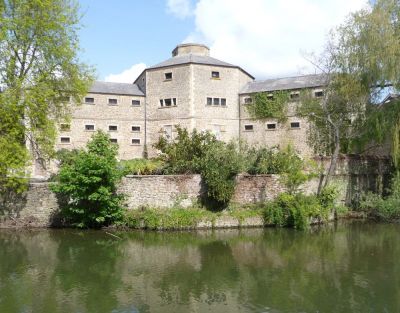 Listing reference: The Old Gaol is listed at grade II (reference no. 1197975)