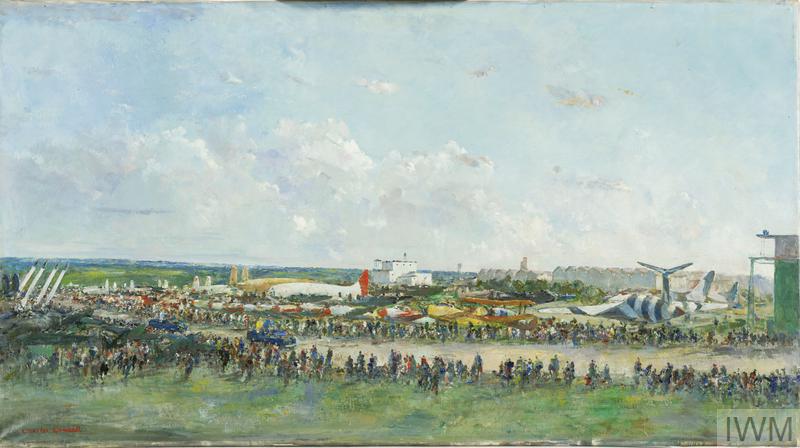 For sixty years, from 1932 to 1992, Abingdon Airfield was an important RAF base. Often such installations are isolated and socially self-contained, but this was not the case at Abingdon. The base was in walking distance of the town centre. RAF personnel and their families shopped and socialised in the town and sent their children to local schools. They helped with local charities, gave Christmas treats to children and old people, and thrilled visiting school classes with lunch in the mess followed by conversation with pilots whom they had just seen landing their planes. Many remained in the district after retirement.

The airfield at Abingdon began life as Shippon Manor airfield in the 1920s, giving rides to civilian thrill-seekers.  It was re-opened in 1932 as a bomber airfield. As well as housing aircraft, it was the centre for what was then called Central Area, before later being reorganised as 1 and 2 (Bomber) Groups as part of the new Bomber Command. 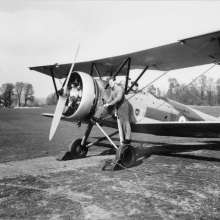 The public were able to visit for the first time in May 1934 during Empire Day when the RAF showed off its biplane bombers.

In September 1936 RAF Abingdon was in the news when Mrs Beryl Markham took off from there to become the first female pilot to fly the Atlantic from east to west. 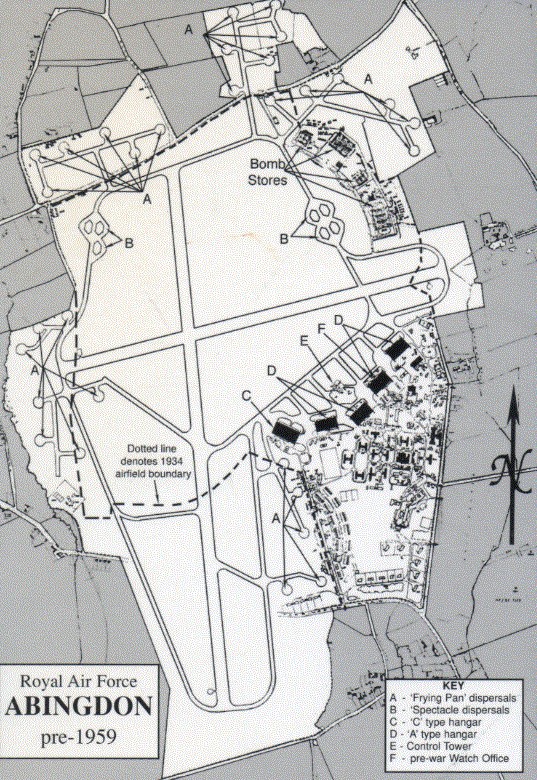 The Abingdon Airfield as it was before 1959. The main N-S runway is about 2000m long
Image courtesy of Pat Minns

As the threat of war loomed, the Abingdon squadrons were ordered to be operationally fit by September 1938. Although the tension eased after the Munich Agreement in September 1938, bombing and close-formation flying practice continued, even over France. The airfield acquired its first ‘satellite’ field at Kidlington with the aim of having somewhere to disperse to if Abingdon were badly attacked.  Another was built at Stanton Harcourt. In June 1939, following an Air Ministry initiative to connect squadrons with municipalities, 40 Squadron became ‘Abingdon’s Own’. The liaison did not last long; the squadron moved out at the outbreak of war in September. For the next six years, Abingdon airfield was where bomber crews acquired their skills.

In 1940 the base became 10 Operational Training Unit, equipped with Whitley and Anson aircraft, and in January 1941 it also became host to No. 1 BAT (Blind Approach Training) flight, teaching the techniques of bad weather flying. Its planes and crews flew occasional offensive missions, notably participating in the ‘thousand-bomber’ raids on Cologne and Essen and in anti-submarine patrols over the Bay of Biscay.

This Whitley bomber survived a spell at Abingdon, completing its career at Honeybourne in Worcestershire.
Photo Courtesey of Pat Minns

On at least three occasions, the base was a target for enemy raiders. Fortunately, their aim was poor and their ordnance unreliable. Once, two bombs landed squarely on the airfield’s bomb store – and failed to explode. There was never more than minor damage, and only one case of serious injury.

There were, however, serious losses. Crews were inexperienced, the ageing Whitley bombers were underpowered, and they didn’t always manage to clear Boar’s Hill. There is a map online (www.rafabingdon10otu.co.uk) showing the sites where no fewer than eight Whitley bombers came down in the immediate area.

Sites of crashes of Whitley bombersafter taking off from Abingdon. Boars Hill was obviously a major hazard
Image courtesy of Pat Mimms

The base was honoured with royal visits. King George VI inspected it in 1940 and returned a year later bringing his family – Queen Elizabeth, and the two princesses – who were entertained with a fly-past.

By December 1944, RAF personnel at the base numbered 11,394.  It was multinational: many of these aircrew were from allies in the Commonwealth and occupied Europe.

After the war, Abingdon’s squadrons lost their training role and became part of Transport Command. A major task here was taking part in the Berlin Airlift from 1948.  Even so, the public open days began again that year. Later, RAF Abingdon ran ‘ferry units’, carrying supplies to RAF operations around the world, including the Middle East Canal Zone, and delivering aircraft to Commonwealth forces. This role ended in the mid-1950s.

In June 1950 No.1 Parachute School moved from Upper Heyford to Abingdon, training army paratroopers. It had its moment of glory in 1959, when its facilities were the setting for part of a feature film starring the glamorous Brigitte Bardot (Babette goes to War). The newspapers reported that trainers and trainees declined weekend leave for fear of missing any action, but were disappointed when the lady appeared wearing nothing more revealing than military battledress. It was in Abingdon that the RAF Falcons parachute display team was formed in 1961. The School saw its one-millionth descent in 1969.  In 1976 it moved to Brize Norton. 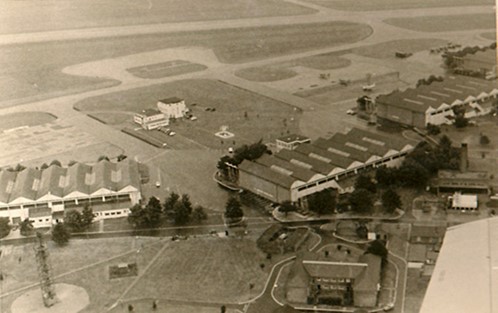 Abingdon Airfield in about 1972 with the parachute training tower at the bottom left.
Photo Mick Lobb; licensed under Creative Commons.

In 1955 the station was granted the Freedom of the Borough of Abingdon, and the airmen marched down Ock Street with the traditional, though perhaps not totally appropriate, drawn swords and fixed bayonets. It was said to be the first time that an RAF station, as distinct from a particular unit, had been honoured in this way. The station also got a new crest which included Abingdon’s cross patonce. There was interaction on many levels between the station and the town. The station was open to townsfolk one day a week, and many took advantage of the Thrift Shop where families being posted elsewhere left unwanted goods to be sold. The Wives Club organised a weekly lunch club for the old at Trinity Church, and had fashion shows at the local clothes shops. Airmen helped to erect the annual Christmas tree in the Market Place. 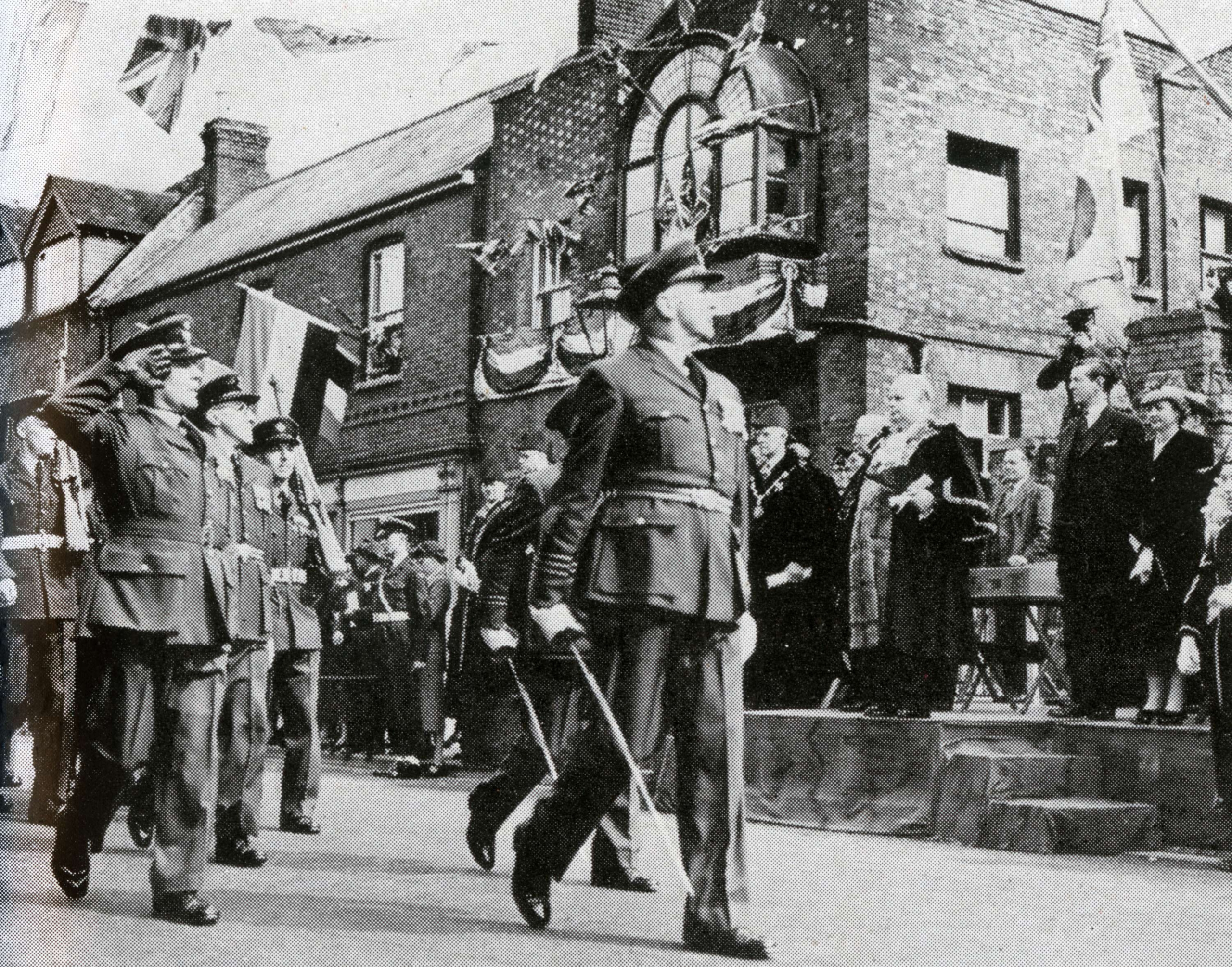 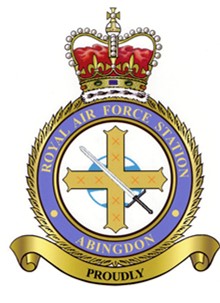 RAF Abingdon’s new crest in 1955. It emphasises the local connection with its cross-patance (cross with 3-pronged  arms.
Image courtesy of Pat Minns.

In 1956, the year of another royal visit, Beverley transport aircraft arrived, heavy four-engined freight aircraft, and the largest aircraft to enter RAF service. This additional capacity, together with its other operations, made Abingdon one of the busiest airfields in the UK.  These aircraft were used in the Suez crisis of that year. In 1957, a tragic accident occurred when a Beverley crashed after take-off, killing seventeen passengers, five crew and eight police dogs. Two civilians on the ground also died.  A wooden memorial marks the spot in Sutton Wick where the aircraft came down. 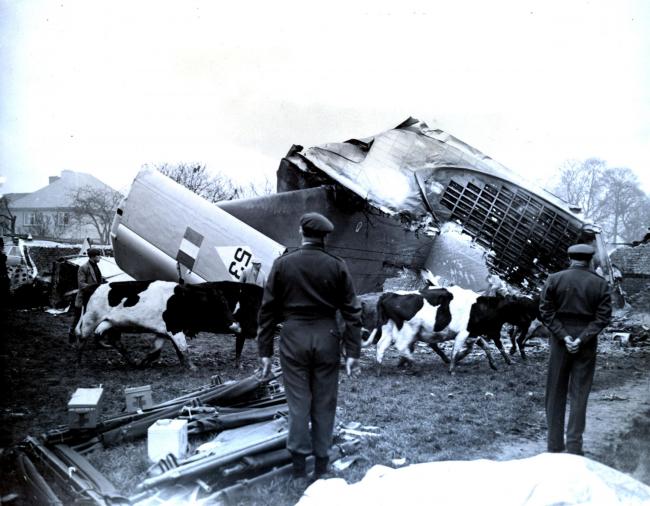 The tragic Beverley crash in March 1957.
Photo courtesy of the Oxford Mail. 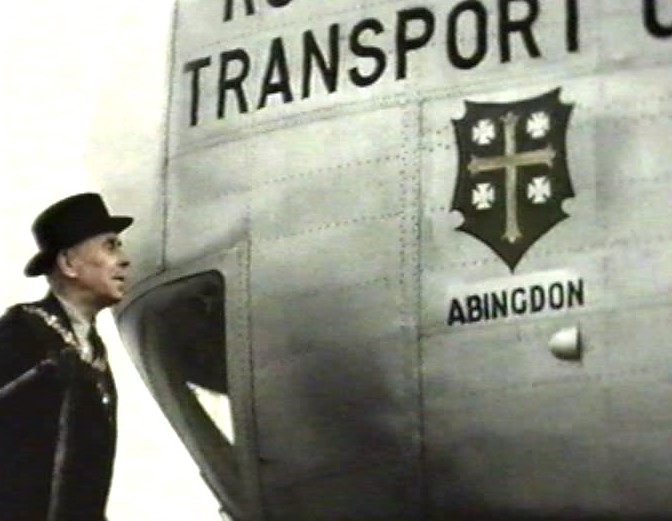 Mayor Clement Barber in 1958 names a Beverley aircraft after the town.From a film in possession of the AAAHS.

In June 1968, it was Abingdon that was chosen for the main celebrations to mark the fiftieth anniversary of the formation of the Royal Air Force. The Queen and Prince Philip attended as did the Queen-Mother and the Queen’s aunts: the Duchess of Gloucester and Princess Marina. They all had lunch in the officers’ mess and then watched a spectacular flying display and toured a comprehensive static one. The show was repeated on the next day for the general public; there were 70,000 visitors.

From 1975, one of Abingdon’s main roles was engineering, maintenance and restoration, and the sound of Jaguar and Hawk jet-engines being taken to full power as part of their testing could be heard all over town.

In the 1990s, rumour turned to reality and the government’s major review of arms expenditure, partly resulting from the ending of the Cold War, had its effect on Abingdon.  Its various squadrons and facilities were gradually dispersed throughout the UK and, in 1992, the last aircraft left for Brize Norton.  In December of that year the RAF ensign was lowered as trumpeters played ‘The Last Post’ and the airfield was handed over to the army for units that were being withdrawn from Germany. RAF Abingdon was now Dalton Barracks.

We acknowledge the help of Bob Frampton as co-author, Pam Martin and Anne Baxter for personal reminiscences, and Pat Minns for permission to use elements from his website  http://www.rafabingdon10otu.co.uk/index.html .