Sir John Holt, the greatest English lawyer of his age, was chief justice of the court of King’s Bench from 1689 until his death. He was born in Thame, the son of Sir Thomas Holt, a barrister, who was recorder of Abingdon and MP for Abingdon during the 1650s. It is said that John Holt was educated at the free school in Abingdon (now Abingdon School), but records for that time are deficient. He spent some years at Oriel College, Oxford, but left without taking a degree, and was called to the bar in 1664. He established himself as an advocate in the higher courts, and avoided being type-cast as a supporter of one or other party, acting in some cases for the royal interest and in others for opponents of the government. In 1686, James II knighted Holt and appointed him recorder of London, but he was obliged to resign from that post when he would not convict a soldier accused of desertion in peace-time, which in Holt’s view was not a crime.[1] In the crisis after the Catholic king James II fled the country in December 1688 Holt advised parliament (to which he was briefly elected as an MP) that James II had renounced his position as king and that the throne was vacant. And he considered that William of Orange, whom the parliament summoned to the throne together with his wife Mary (daughter of James II), could lawfully exercise the prerogative powers of the monarch. This support for William may be one reason why, six days after the joint coronation of William III and Mary, Holt was appointed chief justice of King’s Bench at the early age of 46.[2]

Holt’s reputation today as a great chief justice rests on two broad factors. First, there is the contribution to the content of the common law that came from the acute judgments he gave in disputed cases. These judgments became available through notes made by skilled reporters in court, which were later edited and published. Law students still study Coggs v Bernard (1703), a landmark decision in property and contract law, arising from an accident in London when a large cask (a hogshead) of brandy was dropped by the carrier and gallons of the valuable liquor were lost. Holt analysed the duties owed to the owner of property by someone who is in possession of it (in that case the carrier). He helped to clarify the rule of vicarious liability, by which employers must compensate persons injured by acts of their employees in the course of employment.[3] In another well-known judgment, Ashby v White (1703), Holt held that White, mayor of Aylesbury, was liable in damages for having wrongfully refused to allow Ashby to vote at a parliamentary election. The three other King’s Bench judges disagreed, holding that Ashby’s sole remedy was to petition the House of Commons, but on appeal to the House of Lords, Holt’s judgment was upheld. Holt said, ‘To allow this action will make public officers more careful to observe the constitution of cities and boroughs, and not to be so partial as they commonly are in all elections, which is indeed a great and growing mischief’. Holt decisively rejected the view of the Commons that all election disputes came within the area of parliamentary privilege.[4] In another notable judgment (Smith v Gould, 1701), he ruled that English law does not allow for one person to have ownership of another: ‘there is no such thing as a slave by the law of England’.[5] In numerous cases, Holt emphasised the importance of the work of King’s Bench in supervising decisions by lower courts, corporations and other bodies; this laid the foundations for the judicial review of public authorities today.

The other broad basis for his reputation depends on the manner in which he acted as chief justice, for instance in criminal law, where he refused to uphold convictions for witchcraft, ordered that manacles be removed from defendants during trial, and discouraged the giving of evidence of a defendant’s earlier character before the events in question.[6] It was said that in his court, both litigants and counsel were assured of a courteous hearing. Writing over a century later, one biographer said that Holt was ‘the model on which, in England, the judicial character has been formed’.[7] In one of his many struggles with Parliament, Holt declared that ‘What a judge does honestly in open court, he is not to be arraigned for’.[8] His commitment to the role of judges in administering the common law is evidenced by his decision in 1701 to turn down an offer of appointment as Lord Chancellor, a post that would have required him to take an active role in politics as well as being less secure than that of Chief Justice. He would have known that Parliament had recently provided that judges no longer served at the pleasure of the monarch, but held office during good behaviour and could be removed only by Parliament – a reform that did not apply to the office of Lord Chancellor.[9]

Holt died in 1710, leaving a widow but no children. He is buried at Redgrave church, near Diss, Suffolk. 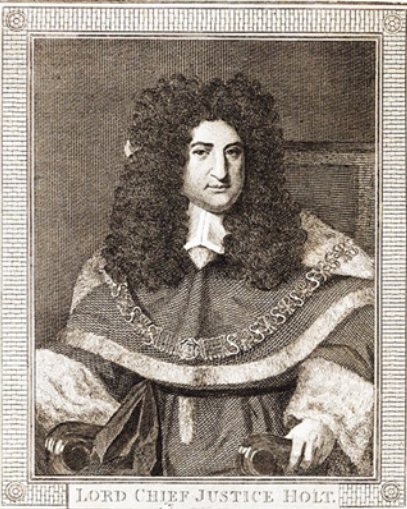