The Civil War was the great British calamity of the seventeenth century.  Between 1642 and 1651, a greater proportion of the population perished than in the First World War and the destruction of property was probably proportionately greater than in the Second.  Between 1642 and 1646, Abingdon was held by both sides in turn. The garrisons lived largely at the expense of the townspeople by taxation, extortion and billeting. The death toll was high as much by disease as by military activity, and there was great material damage. Abingdon was impoverished, and recovery would be slow.

In our time, political differences are centred on economics – the direction of growth, and who gets what. In the seventeenth century, the main division was between different conceptions of religion. Parliament was dominated by people of advanced religious ideas – Puritans – while the king had surrounded himself with men of more traditional views. Abingdon, like most of the country, was split. Among the élite, a majority was conservative. Under the leadership of the extensive Mayott clan, they were well established in St Nicolas and dominated the town’s corporation. Lesser folk may have been more ‘godly’. In the 1620s, a Puritan vicar, Edward Roode, officiated at St Helen’s, by far the larger of the two town churches, under the protection of the Tesdale family. The conservatives had been able to get him removed and replaced with a cleric more to their liking, but by 1640 the latter had been pressured into resigning and Roode had returned.

At the parliamentary election of spring 1640, the vote, among a very restricted electorate, had gone to Sir George Stonehouse of Radley, whose family had a long tradition of local public service. The Tesdales’ candidate, the recorder Bulstrode Whitelocke, had been rejected. Stonehouse was re-elected unopposed in the autumn. This would prove unfortunate. Stonehouse refused to take a parliamentary oath of allegiance, ceased to attend, and would eventually be excluded, while Whitelocke became a prominent Parliamentarian politician. Whitelocke continued to take an interest in Abingdon, but the town was certainly disadvantaged by having no direct parliamentary representation for at least two years.

In the run-up to war the Corporation tried as best it could to fortify the town against invading armies. Stakes were planted on the approach roads, and chains were stretched across them. This proved of no avail. After the indecisive battle of Edgehill in October 1642 and the failure of the king’s march on London, the Royalists made Oxford their capital and garrisoned Abingdon as part of its outer defences. The main danger was perceived to come from the south and east, and the soldiers dug in on Culham Hill to defend the road and bridges. The churches were used as barracks, although church services continued. The soldiers were undisciplined, often fighting among themselves, and the inhabitants were subjected to looting and extortion. Taxes were levied at previously unheard-of rates and affluent citizens were coerced into paying large amounts of money, nominally as loans, to the Royalist treasury. The Puritan vicar Edward Roode left to serve the Parliamentarian cause elsewhere. The Corporation had to obey the military authorities and the governmental institutions the Royalists set up in Oxford.  The Royalists respected the traditional forms of municipal liberty, and an order to dismiss a Corporation member they disapproved of was in the name of Sir Robert Heath, the Royalist Chief Justice. It was understood that the position of mayor was a hazardous one, bearing responsibility for carrying out whatever orders might come, and with equal risk of pseudo-legal sanctions from above and personal violence from below. In several successive years, men who had been elected to the position had to be forced by fines or imprisonment to take it.

The town was overcrowded with soldiers and their dependants. Diseases spread rapidly. An epidemic, probably of typhus, started in April 1643, and the rate of burials at St Helen’s reached seven times its normal level before records simply ceased to be kept. It was probably this that prompted the opening of the new burial ground which was discovered in excavations at the Abbey site in the 1980s.

On 17 April 1644, King Charles and Queen Henrietta Maria and their two older sons came to Abingdon, staying overnight at Barton House, just outside the town. On the following morning, the pregnant queen went on to Exeter, where she gave birth to a daughter, Henrietta, and thence to France. The king and his sons returned to Oxford. It was the last farewell of the king and the queen; they would not meet again.

In May 1644, a failure of communications among the Royalist commanders left the town open to occupation by the Parliamentarians under General Waller. The first result was the demolition of the market cross, an elaborate civic monument for which Abingdon was noted and which had been something of a tourist attraction. Crosses were anathema to Puritans, and many of the soldiers came from London, where the Cheapside Cross had also recently been demolished. 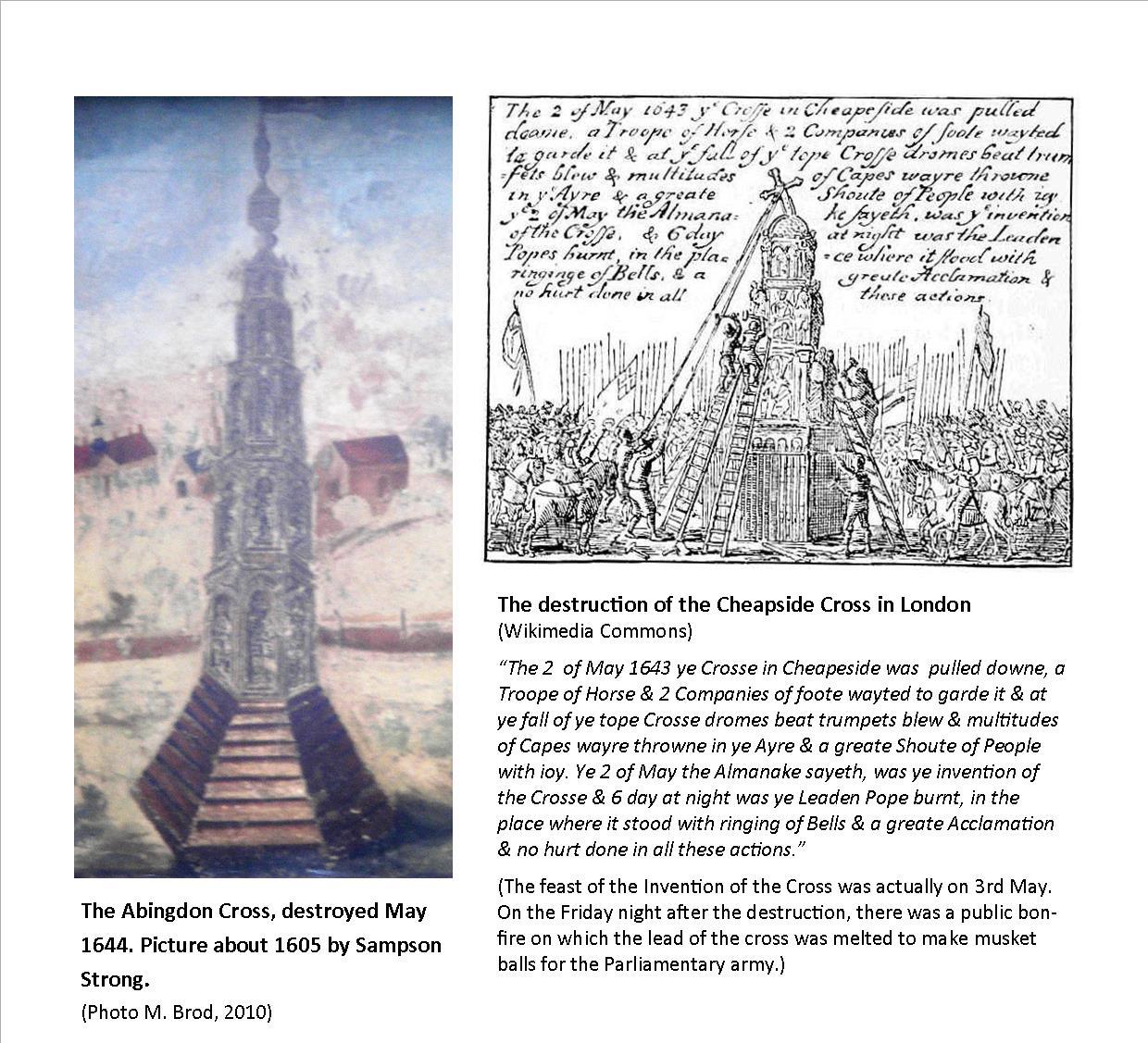 Life in Abingdon now became even more difficult than before. The new military governor, Major-General Browne, imposed an oath of loyalty to Parliament and imprisoned anyone who refused to take it; the punishment for disobedience was hanging. The town remained overcrowded, with a large garrison that needed to be supported. The soldiers rarely received their pay, and were under-equipped and demoralised. In spite of Browne’s gallows, desertions were frequent.

On three occasions the Royalists made attempts to retake Abingdon. The first was within a few days of its loss, when a small party of cavalry fought its way in, perhaps not realising that Waller’s field army was still in residence,  and was easily enough repulsed. The second occasion was more serious. In January 1645, a force of 3000 men with artillery attacked from the Culham side, entrenching themselves on Culham Hill, and sending an élite force to secure the bridge. The defenders waded through flooded meadows to take the attackers from behind. The Royalists were beaten off, and Colonel Gage, a much-admired war hero on their side, was killed. The men on the bridge were captured. They were a mixed unit of Dutch mercenaries and Irish volunteers. The Dutchmen were treated as prisoners of war; the Irish, as required by a parliamentary ordinance, immediately hanged.

The third attempt came nearer to success, although by March 1646 the Royalists would have been in no state to consolidate any gains they might have made. A force of some 2000 men, half of them cavalry, hid until dawn in Barton House. Somehow, they remained undetected by the Parliamentarian patrols; according to one account, a patrol did see them getting into position, but decided to ride away and desert rather than give the alarm. The infantry then climbed over the fortifications that had been built on a line from Fitzharris to the river, and before the defenders could react they had taken possession of the whole Abbey area as far as the Gateway, where they attempted unsuccessfully to release the prisoners who were held there. The strategy was to hold off the defenders while breaches were made in the fortifications to allow the cavalry to enter in force. Three times the Parliamentarian cavalry had to charge the Royalist pikemen before they broke, but no serious breaches were made and the attack failed. But the various reports agree it was a close-run thing, with fighting close to the Market Square, and even some of the townsfolk taking part. Barton House was then demolished to prevent any further such incidents. 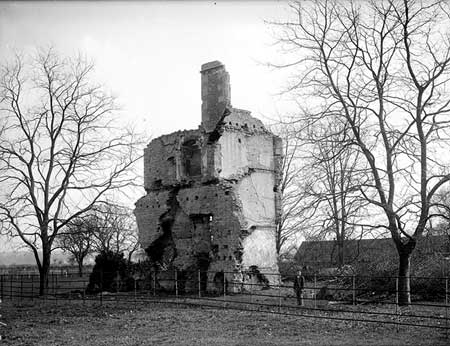 Unlike the Royalists, the Parliamentarians introduced innovations that changed the way Abingdon was administered. The Corporation, which was thoroughly purged, was now subordinate to a County Committee that sat in Reading. The mayor and some other leading townsmen might be members, but they were either ex-officio or nominated by Parliament, not elected. The distinction between gentry-controlled country districts and self-governing chartered towns disappeared, and local men might find themselves, perhaps unwillingly, taking county-wide responsibilities. A London lawyer who was a member of the County Committee, William Ball, became MP in place of the expelled George Stonehouse. His election seems to have been a formality. Corporation members continued to accept being fined or imprisoned rather than serve their terms as mayor.

When the fighting in the Thames Valley stopped in June 1646, the town was impoverished and had suffered much material damage that would have to be made good. Leases had to be renewed at reduced rates to allow repairs and rebuilding. Sympathisers in Parliament authorised charitable appeals to be made in the churches of London and Westminster ‘for and towards the relief of the visited and other poor and distressed people of the town of Abingdon’. Unfortunately, there were many such appeals and the response is likely to have been slim.

Recovery would be slow. The garrison was disbanded only in January 1647, although the ex-soldiers would still be petitioning for their arrears of pay in 1652. The garrison was replaced almost immediately by Colonel Rainborowe’s regiment in a state of mutiny, tacitly permitted by the government to extort its maintenance from the inhabitants.  The later 1640s was a period of poor harvests and high food prices. It was only in the 1650s that some semblance of normality would return in the life and governance of the town.

The religious divisions persisted. Edward Roode had died, but was replaced at St Helen’s by another advanced Puritan, John Pendarves, who would later become a Baptist. St Nicolas, still supported by the Mayotts, remained traditional and used the old Prayer Book even when this was illegal.  The County Committee had faded away by 1650, but the Corporation was obliged in that year to find a large sum of money – several times its normal income – to give to the cash-strapped central government in exchange for the cancellation of the annual fee-farm rental that it was accustomed to pay in respect of the property it had acquired a hundred years earlier under its charter. When the Restoration of the Monarchy in 1660 returned the country as a whole to normal politics, there was no great disturbance in Abingdon beyond  a return to traditional religion in St Helen’s, another purge of the Corporation, and a requirement to redeem the fee-farm rental yet again, this time at a significantly higher rate.

These books give references to the original sources.