Albert Lock spent much of his adult life living in Abingdon where he was a well-known figure and is still remembered by some today almost 60 years after his death. Bert, as he was generally known, was born in Sutton Courtney (as it was then spelled), the third son in the family of eight of Joseph and Maria Lock, who ran the Plough public house. Joseph was a noted stonemason and sign writer while Maria was the licensee. The Locks had been a presence in the village since the mid-eighteenth century having originally come from the Faringdon area.

Bert’s early years seem to have been quite a happy time and childhood exploits are well documented by his brother’s memoirs which give a fascinating insight into village life in the latter years of the nineteenth century. Fishing, swimming, skating, cricket and a bit of mischief making apparently occupied much of their time out of school, where older sister Sally was a pupil teacher.

There is an interesting account of a feud with the village of Drayton when two sets of young men became embroiled in a quite unpleasant fight. Bert and his brother Harry took to their heels and fled to the safety of the pub! 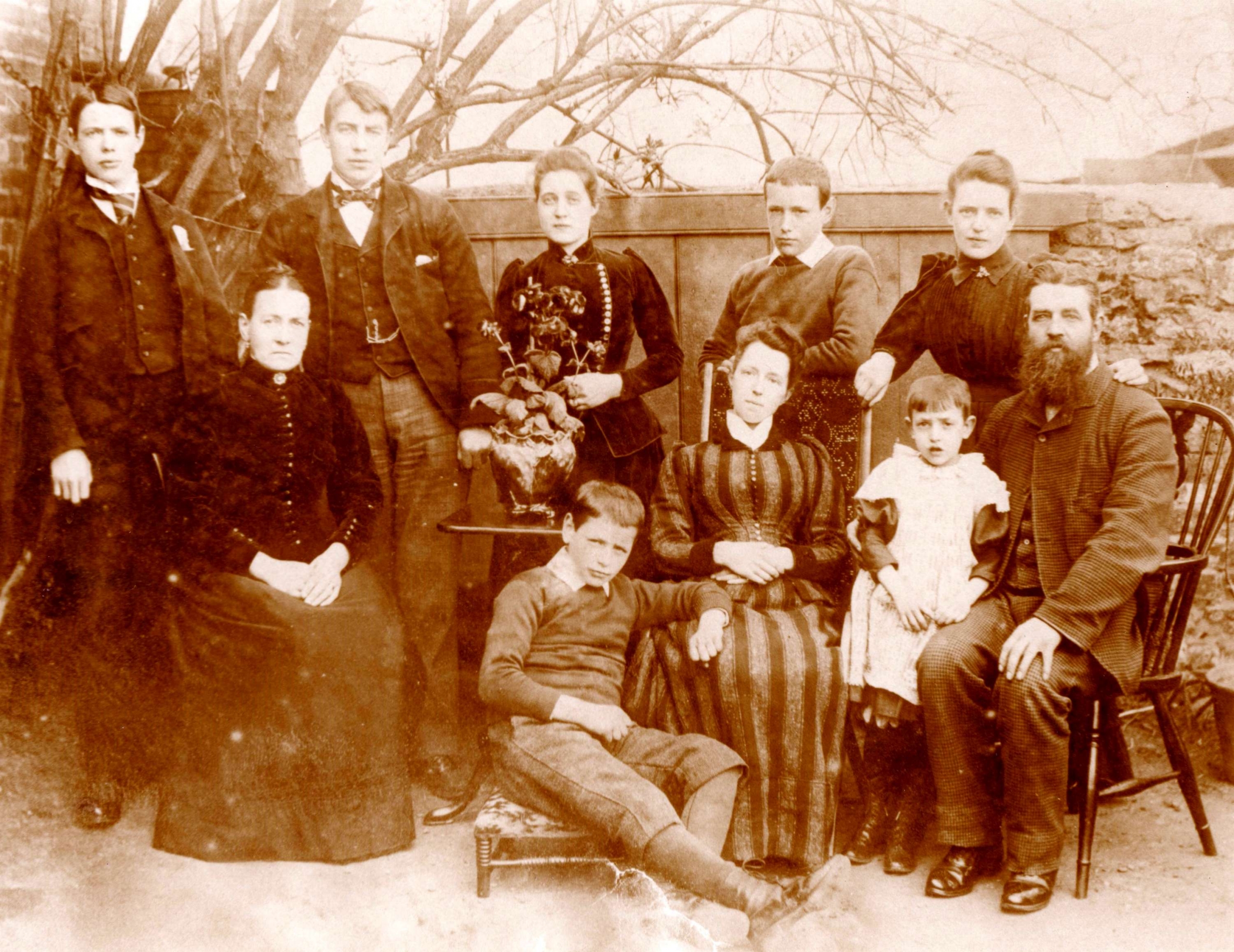 Joseph and Maria Lock with their eight children in in 1892. Bert is second from right in the back row. (© From the author’s private collection)

Joseph was a partner in the firm of Lock and Godfrey, a stonemasons’ business at 35 East St Helen Street, Abingdon, now the ‘gatehouse’ to St Helen’s Mews. The Godfreys were cousins so it was a family affair and the two families had been in business together as stonemasons since the 1780s.

Advertisement in Baylis & Co’s Domestic Almanac and Companion, 1885. (© Privately owned photocopy kindly scanned by the owner. We have not been able to trace the original publication or a current copyright holder. We apologise if we have inadvertently used a copyright image and invite copyright holders to contact us) 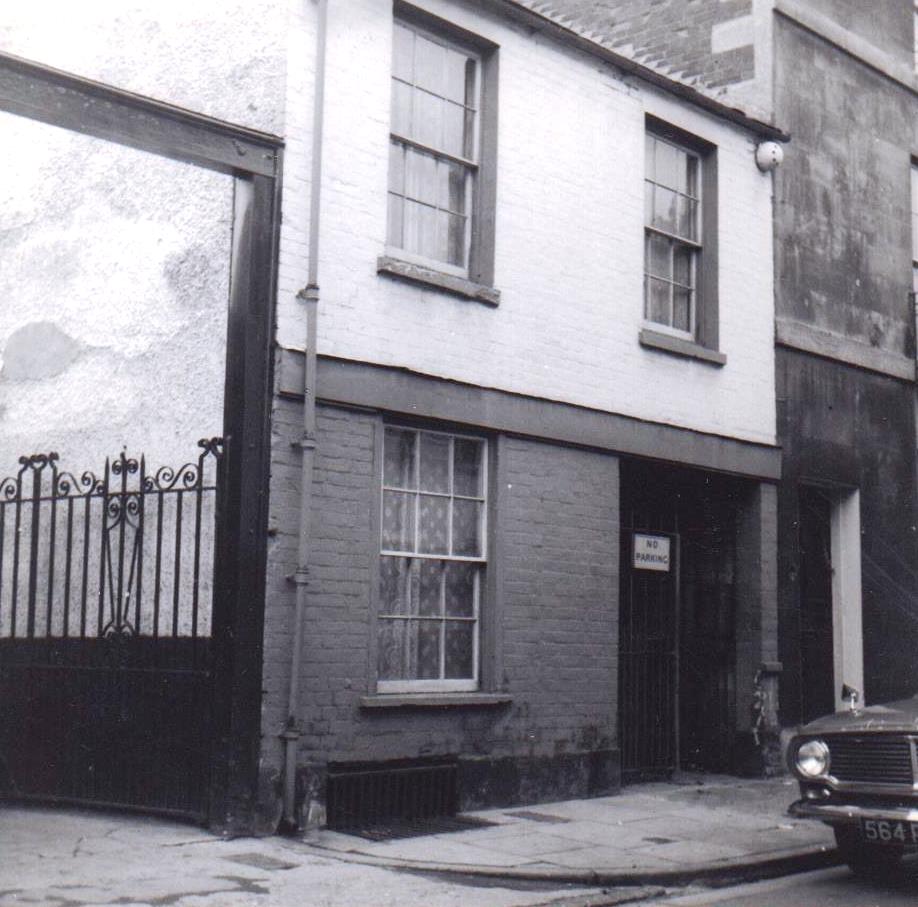 In around 1892 Bert left school and joined the firm. He took quickly to the craft, gaining a reputation for excellent work. His other brothers left home once old enough to start apprenticeships elsewhere and, as the only son to remain in the area, it was Bert who carried on the Lock family name when Joseph died in 1905. By this time Dennis Godfrey had moved his side of the business to 163 Ock Street, where there is still a stonemason’s yard today, while Bert and his father continued to work from East St Helen Street.

After his father died, Bert also supported his mother in running the Plough in the evenings and at weekends. As well as this he gained a love of bell ringing which was to become a lifelong passion. It was through ringing that he met his wife to be, Kathleen Hollifield, who came from a well-known family of ringers in Appleton. They were married in 1915. At this time Bert joined up and served in the Royal Flying Corps as an artificer working on Bristol Bulldogs, possibly at the Milton Depot. He and Kath initially lived in the Vineyard but after the war moved to the house at 35 East St Helen Street which had been in the Godfrey family since they built it in 1828. A ledger survives showing the initial order of materials to construct the property. Kath was a great believer in female emancipation. She delivered army lorries during the Great War and subsequently was one of the first women to own a car in the district. She acted as chauffeuse to Bert throughout his life.

The years after the war brought a great deal of business to stonemasons as the War Office ordered thousands of headstones for the fallen. Bert was awarded a contract for a considerable number and received a commendation for the quality of his work. Portland stone was delivered to Abingdon station and transported by cart to the yard. The completed stones were returned the same way.  The cart remained at East St Helen Street until Bert’s death, when it was removed to the Abbey buildings. It is now in the care of the Oxfordshire Museum Service and is on display at Swalcliffe Barn. Bert is unlikely to have approved of the change of county! 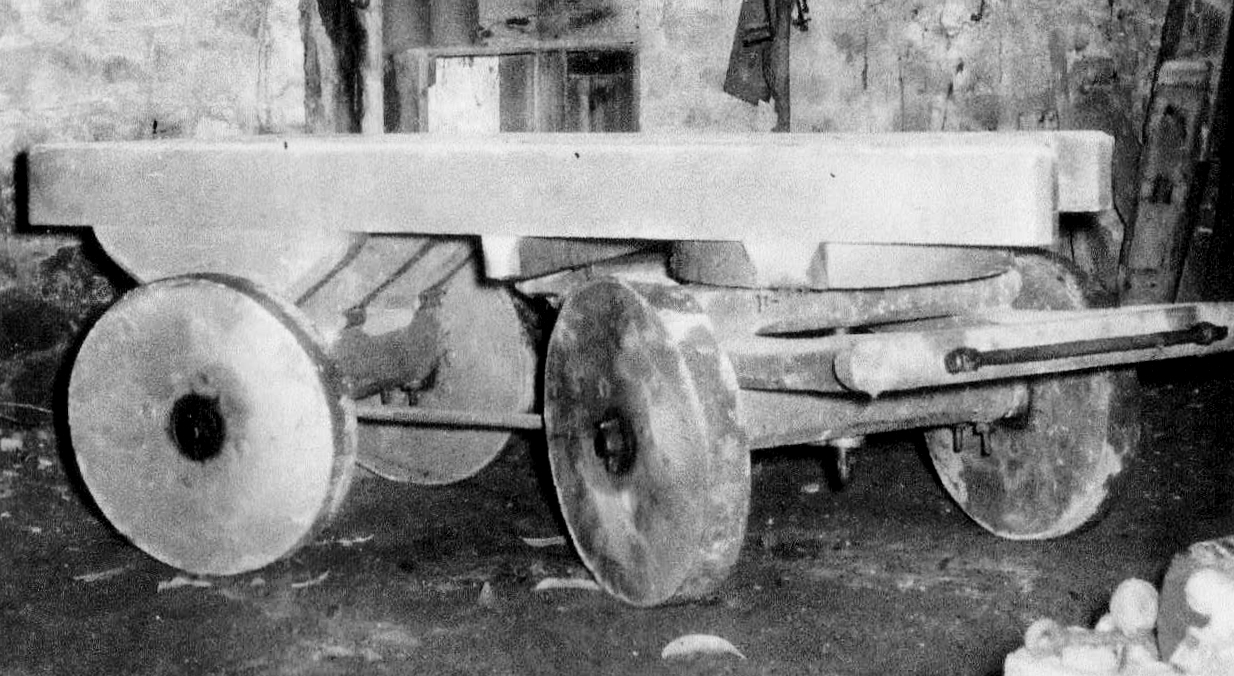 The stonemasons cart (© From the author’s private collection)

Bert and Kath lived a busy life between the wars with work and bell ringing occupying much of their time. There were no children from the marriage. East St Helen Street was a place of work and sleep.   A story is told that on a rare evening at home, they switched on an electric fire in the front room, which was then left on for three weeks. The bill was huge!  Bert was for some time Honorary Secretary of the North Berks Branch of the Oxford Diocesan Guild of Church Bell Ringers and did much to encourage a younger generation to take up the art. 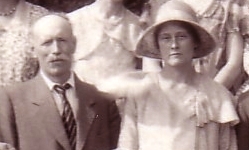 Bert and Kath in 1930 from a photo of a family wedding. (© From the author’s private collection)

Bert served as a special constable throughout the Second World War which added to his duties, although by this time he was in his sixties and working less hard at his trade. There was little bell ringing to be done for the duration. The ringing fraternity had to wait for the cessation of hostilities before they could practise the art again. 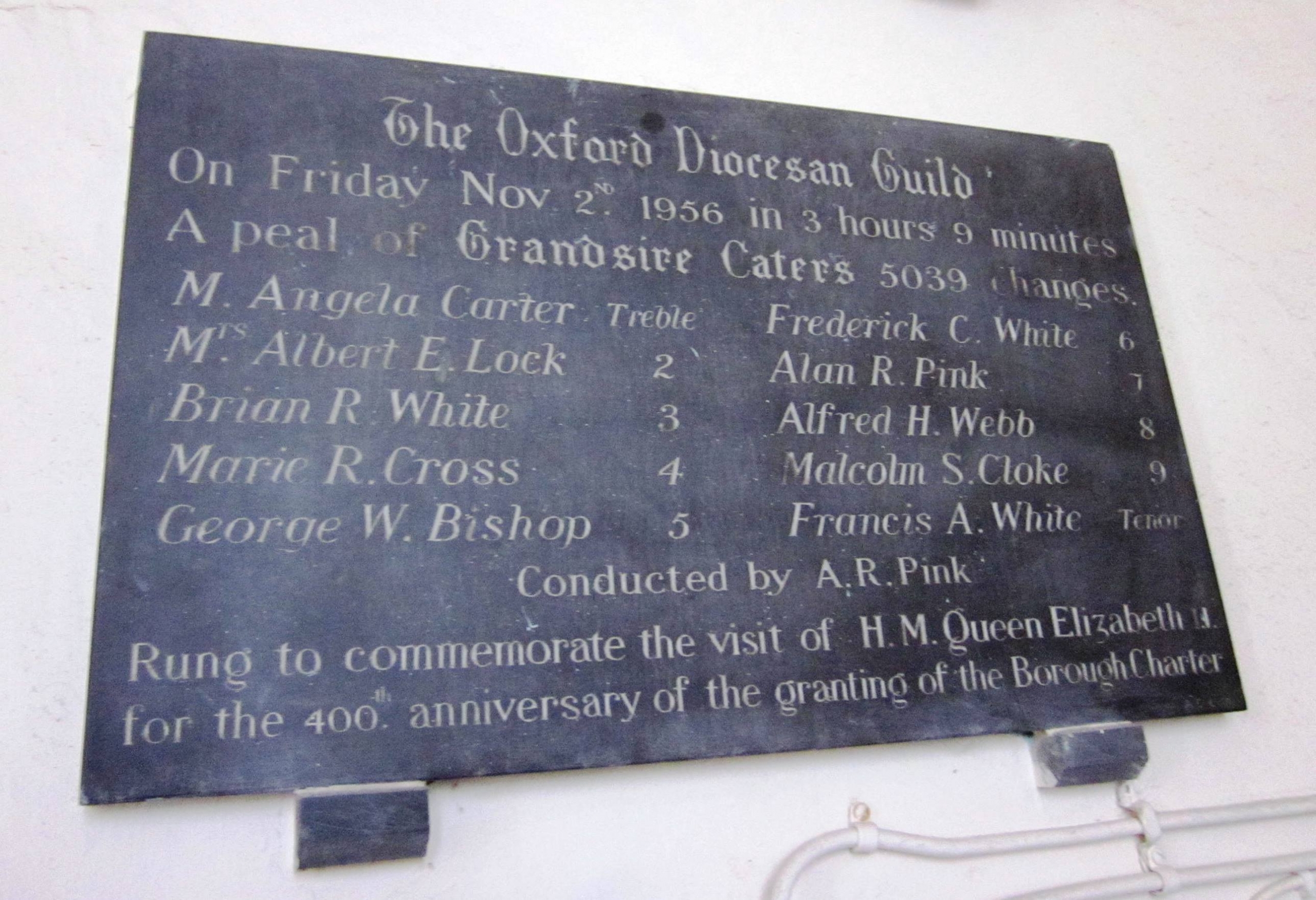 Although semi-retired, Bert inscribed a plaque for Agnes Baker, a well-known Abingdon historian, which was installed in St Nicolas’ Church after her death in 1955. He was to die five years later, in July 1960 at the age of 81 and was buried in the family grave at Sutton Courtenay. A memorial service held at St Nicolas’ in the September attracted a large congregation. 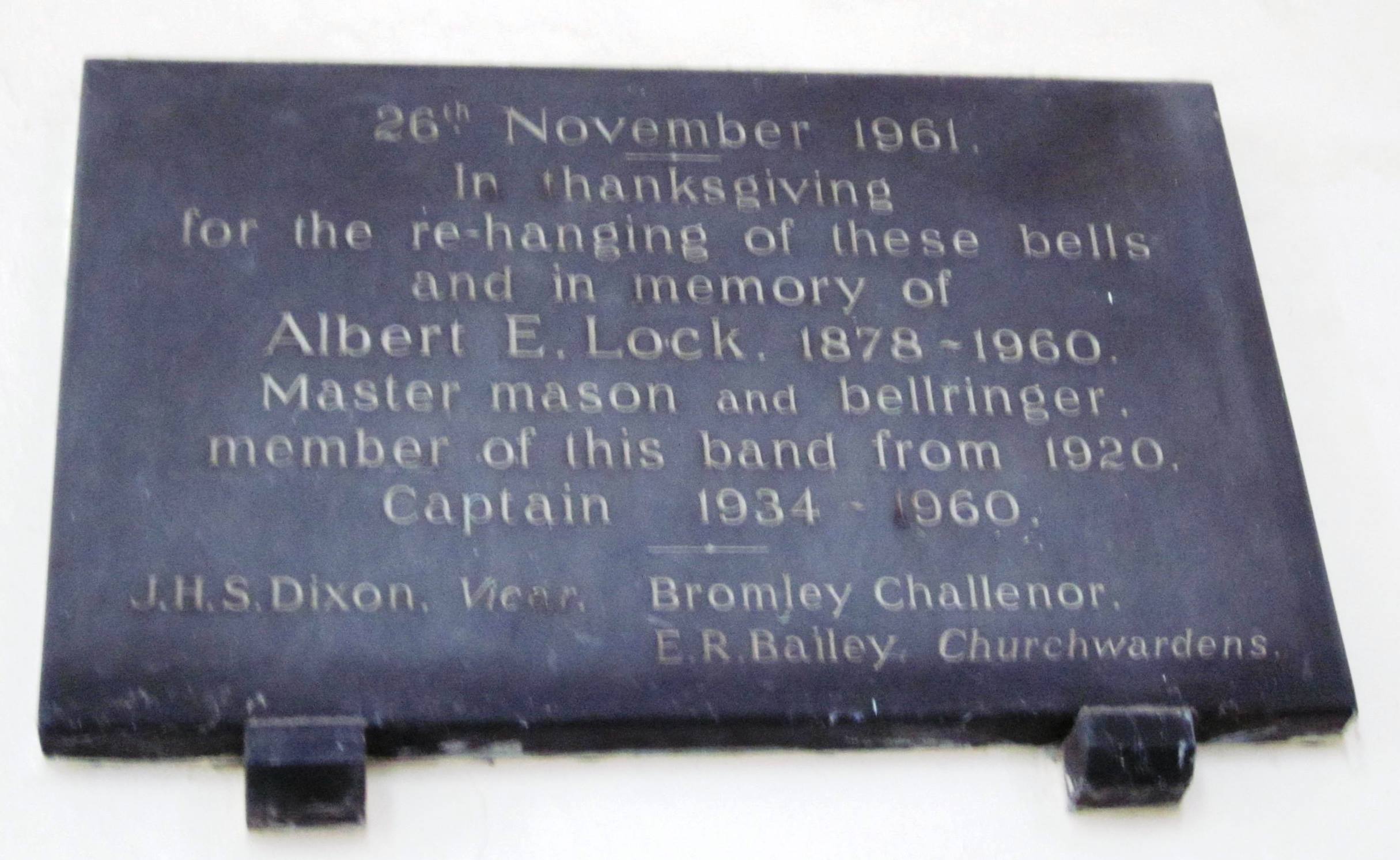 When Kath died a few years later and the house was cleared, it proved to be a treasure trove. Not only had the ledger survived, but school books from Sutton and Milton, one from as early as 1790 and several from the early nineteenth century, as well as all sorts of other family papers and documents which added much to the Lock archive.

Albert Lock gave a great deal to the town during his lifetime and well deserves to be remembered as an Abingdon personality. 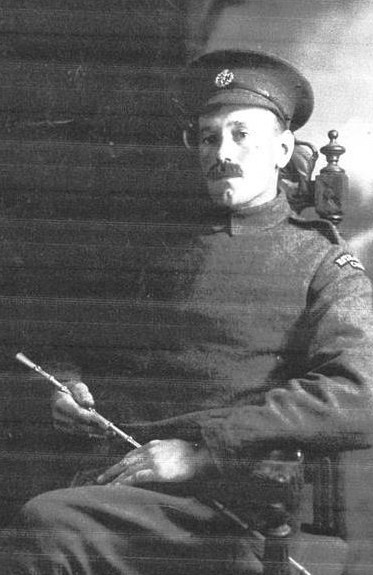 Albert Lock in about 1916 in Royal Flying Corps uniform

© From the author’s private collection