Willoughby Bertie became fourth Earl of Abingdon on the death of his father, also Willoughby, in 1760 and was made High Steward of Abingdon and of Wallingford in the same year.

He was an active radical politician, who as a young man had gone in company with the then outlawed John Wilkes to visit Voltaire, the great figurehead of advanced Enlightenment politics, in Geneva. His political opinions seem unexceptionable today but were regarded as outrageous by his contemporaries. He strongly opposed the war against the American colonies, taking the view that Parliament was acting outside its legal powers in seeking to justify taxation without representation, and that this might lead to a parliamentary tyranny in Britain as it had in America. He took a similar position on British rule in Ireland. His effectiveness as a politician was always limited; he was too principled to join with others and too undiplomatic to make tactical alliances, and was often regarded as eccentric rather than serious.

Bertie was a notable musician. He played the flute, and was a prolific and skilful composer and song writer. About 150 of his compositions are extant. Some works were joint productions between himself and Haydn. He was patron of a series of concerts in London, on which he lost a large amount of money. A painting of him by J F Rigaud (shown above as a print) depicts him in the act of composition.

In Abingdon, he was active in local politics, supporting Whig candidates at the hustings. At his accession, he presented the Corporation with two valuable silver bowls and ladles, and in 1788 he made a gift of his accumulated fees as High Steward which were sufficient to pay for the culverting of the Stert Stream from the end of Broad Street to the Vineyard.

An enthusiastic huntsman and horse breeder, Bertie was very probably one of the backers of the Abingdon Races, which began in 1767 at Culham Heath; certainly, he opened the dancing at the ball given on the occasion, and served as a steward of the course in the following year.

In 1768 Bertie married Susanne Warren, daughter and co-heiress of a wealthy naval officer with interests both in England and America, but this did not save him from severe financial difficulties which had their origin in debts inherited from his father. He had to withdraw from the turf and sell off the furnishings of his seat at Rycote (near Thame). He died, bankrupt, in 1799, and his third and only surviving son, Montague Bertie, succeeded at the age of fifteen to the earldom, to the High Stewardship of Abingdon, and to his debts. Successive Earls of Abingdon have continued to be High Stewards of the town to this day.

The baptismal name Willoughby occurs frequently in the Bertie family. It was marriage into the noble Willoughby of Eresby family in the sixteenth century that enabled their ancestor Richard Bertie to emerge from obscurity, and in the eighteenth the second Earl of Abingdon married a Willoughby of Parham. Their son and heir was named Willoughby, and he in his turn gave the name to his second son. The third earl’s older son, James, was killed in a disastrous fire at Rycote in 1745, and it was the younger Willoughby who succeeded as fourth earl in 1760.[1] He was also elected to his father’s high stewardships in Abingdon and Wallingford.

Bertie was educated at Westminster School and Magdalen College, Oxford, where, as he later insisted, he despised his teachers and contrived to learn nothing. Nonetheless, he took his M.A. in 1761 and then set off on the obligatory continental tour. This he regarded as more of an education; he took lessons from eminent musicians – he was a serious flautist – and studied the various political systems he was exposed to.  In Geneva, in company with the exiled radical John Wilkes, he visited Voltaire, the great figurehead of advanced political thought. Voltaire, characteristically, saw nothing in him other than a run-of-the-mill English aristocrat concerned with little beyond his hunting dogs and mistresses.[2]

Back in England, Bertie seemed to be set on proving Voltaire right. It was probably he who was behind the Abingdon races which began in 1767 at Culham Heath; he opened the dancing at the ball held on the first night, and was one of the course stewards in the following year.[3] He had a pack of hunting dogs at Rycote, and in 1770 set up The Earl of Abingdon’s Hunt which ranged between Thame and Tetsworth.[4] He started a stud and bred, among others, one of the outstanding racehorses of the century, the oddly named Potoooooooo or Pot-8-Os for short, which won thirty-four major races in seven years.[5]

Yet this did not long satisfy him, or, more likely, it proved too expensive. In 1768, he sold Pot-8-Os while cannily reserving a share of his future winnings. He is supposed to have published a long, wry, poem entitled An Adieu to the Turf. It was dedicated to Richard Tattersall, the bloodstock auctioneer, and made mostly disparaging remarks about prominent figures in the contemporary racing world. It was also harsh on William Markham, whom Bertie had detested as a brutal schoolmaster at Westminster and, now that he was Archbishop of York, hated as a particularly obnoxious political opponent.[6] The publication may have been a spoof, but it correctly signalled that Bertie thereafter would be a full-time politician. His first speech in the House of Lords was in 1770.[7]

Bertie’s political opinions seem unexceptionable today but were regarded as outrageous by his contemporaries. He strongly opposed the war against the American colonies. So did others, but he went further, taking the view that Parliament was acting outside its legal powers in seeking to justify taxation without representation, and that this might lead to a parliamentary tyranny in Britain as it had in America. His pioneering attempt to secure a judicial review of the government’s actions was voted down by the House of Lords. A pamphlet of 1777, Thoughts on the letter of Edmund Burke, esq. to the sheriffs of Bristol on the affairs of America, was a best-seller both in Britain and America and went through many editions, but lost him credit and friends in the political establishment. He mocked George III with risking the loss of one of his colonies for each of his thirteen children.[8] His effectiveness as a politician was always limited; he was too principled and too undiplomatic to join factions, and was often regarded as eccentric rather than serious.[9]

Bertie’s musical interests never waned. In the 1790s, Haydn made two visits to London and the two men cooperated in several compositions where the vocal lines were composed by the earl and Haydn provided the accompaniments. But Bertie was also a prolific composer and song writer in his own right, and about 150 of his compositions are extant.[10] A picture by J F Rigaud, now surviving only as a print, shows him in the act of composition. [11]

He also tried his hand at musical management. He had allowed his sister Elizabeth to make a mésalliance with her Italian dancing master Giovanni Gallini who later became a wealthy if always slightly disreputable impresario and theatre manager in London.[12]  In 1783 Bertie was induced to take over responsibility for a series of concerts which otherwise would have come to an end. This proved financially disastrous, and he withdrew after two years.[13]

The earl always sought to maintain his contacts with Abingdon, although his political stances might be unpopular in the Corporation.[14] When he became High Steward, he presented the Corporation of Abingdon with two silver bowls and matching ladles in recognition of the honour, and they may still be seen in the display of the Corporation plate in the Guildhall. In 1788 he made a gift of his accumulated fees which were sufficient to pay for the culverting of the Stert Stream from the end of Broad Street to the Vineyard.[15] He was active in local politics, supporting Whig candidates at the hustings.

The main feature of Willoughby Bertie’s life was constantly increasing financial problems. Contemporaries attributed this to reckless expenditures in his early years, but the truth is that he had inherited from his father enormous debts that there was never any hope of paying off while living with the open-handedness expected of an earl, and he was always at the mercy of his creditors. Shortage of money no doubt dictated his retirement from the turf and the closure of his stud. The contents of Rycote, near Thame, which had been the Berties’ main residence for a century, were sold at auction in 1778 and the estate was leased out in 1798. The family’s second seat at Wytham was similarly despoiled.[16] It may also have been financial need that had determined his marriage in 1768. His bride, Charlotte Warren, was not of noble stock but the daughter of an admiral who had become enormously rich with prize money in the Atlantic wars against the French; he now owned much of New York. Bertie’s later preoccupation with American affairs was thus not entirely disinterested.[17] The marriage produced seven children, at least one of whom, Charlotte, would inherit his musical talents. [18]

There was a disaster in 1795 when one of his pamphlets led to a libel case which he lost, and he spent three months confined as a debtor in the ‘rules’ of Southwark – an area near the gaol where he could live in comfort, but which he could not leave.[19] He died, bankrupt, in 1799. An obituary described him as ‘a man of genius, but eccentric and irregular almost to madness.’ [20] Modern commentators are inclined to take a more indulgent view of him.

[13] Derek McCulloch, ‘Music in the life of Willoughby Bertie, 4th Earl of Abingdon’

[18] McCulloch, ‘Music in the life of Willoughby Bertie’

James Bertie, who would be the first Earl of Abingdon, was born in 1653. He was a younger son of the second Earl of Lindsey, so would not inherit the […]

John Mason was an important patron of Abingdon in its transition from a property of the abbey to a chartered borough under its own mayor and corporation. He was born […] 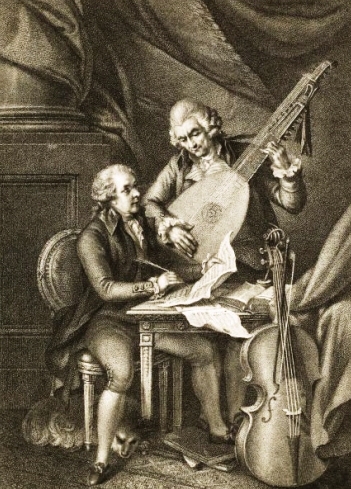 Willoughby Bertie (seated) as a composer.

The Blacknall family
Scroll to top